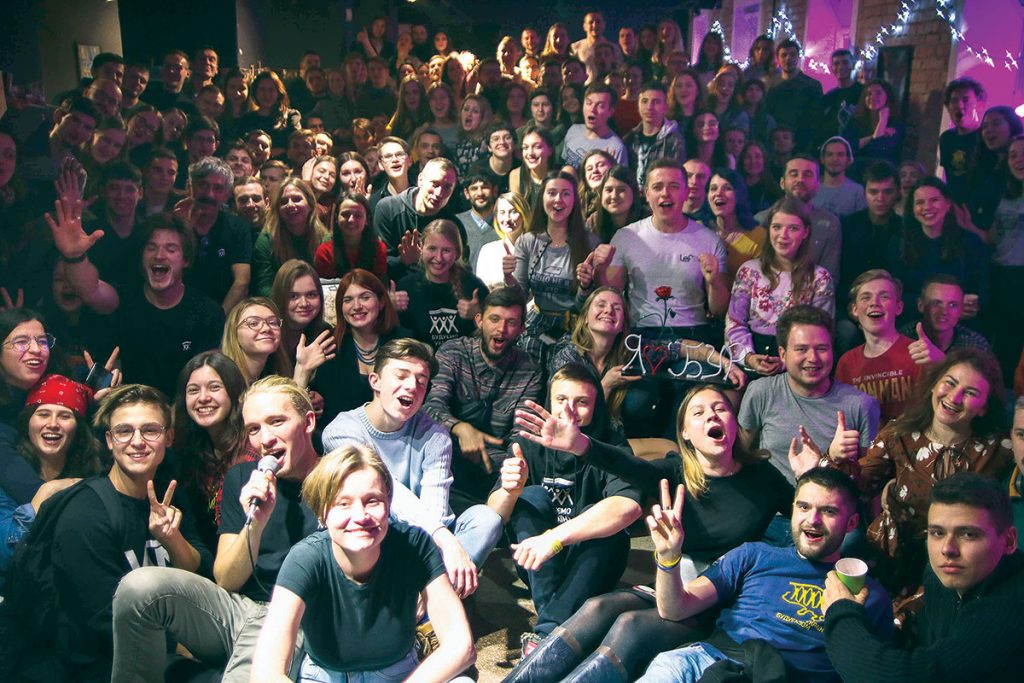 Anna Yutchenko/BUR
Volunteers and friends at the celebration of the Building Ukraine Together project’s fifth birthday.

KYIV – In 2014, after the first months of Russian armed aggression in the east of Ukraine, volunteers cooperated to help locals with restoring the damage Russian forces did in their towns and villages. The Building Ukraine Together project (known by its Ukrainian acronym as BUR) emerged as a volunteer action to rebuild houses damaged by war.

Over time, BUR has become a volunteer movement all across Ukraine, forming and uniting a new generation of responsible Ukrainians who are making change. Therefore, BUR is about building, still not only houses but bridges of communication between Ukrainians. On December 21, 2019, the initiative celebrated its fifth birthday and shared its insights, presented achievements and announced its plans.

“Ukraine desperately needs more responsible and bold people who would dare to start their businesses, go into the government or politics. Unfortunately, there are very few programs that teach those social skills and give motivation. BUR is among those few,” said Yurko Didula, a co-founder of the initiative and the leader of the BUR development team.

“We provide young people with an opportunity to practice responsibility. We give them a chance to fall in love with Ukraine and build a desire to make it a better place. We provide young people with tools and resources to launch their projects. And it works. Thus, they learn responsibility and confidence. That’s what motivates us – not the homes we rebuild, but the people we reinforce on the way,” he explained.

On Saturday evening, December 21, 2019, more than 100 volunteers and BUR friends gathered at the platform of art and science Ostriv (Island) to celebrate half a decade of the project’s dynamic activity. Between partying, coordinators summarized the achievements of BUR. During these five years, around 2,800 volunteers were involved in different activities of the movement. BUR reached 22 of Ukraine’s 25 regions. Sixty-two towns or villages were locations of two-week BUR camps, which are platforms for community engagement for rural and urban spaces development.

“We help families to rebuild housing, create open spaces in abandoned areas, and have a cultural and educational program for volunteers and communities where we learn, communicate and share the experience,” related Khrystyna Dubnytska, head of the BUR communications team.

At BUR camps, volunteers repaired 214 damaged houses, created fifty-two public spaces, painted 60 murals or graffiti, and created 24 youth platforms in the five years since the project emerged. Hundreds of volunteers do not hesitate to spend their vacations at a camp to build physical walls and destroy metaphorical ones.

For those who do not have enough time for this kind of activity, the Building Ukraine Together movement has a “BURCHYK” – a mini-version of the classic BUR camp which brings values of mutual assistance and good neighborliness to the community. “We develop civic awareness through short-term initiatives: we help families in need, create public spaces,” the BUR website notes.

Another part of the December celebration was a discussion on volunteering. BUR’s Mr. Didula and Roman Sakh, creator of Ostriv (the platform where the party was held), were joined by journalist Roman Skrypin and co-founder of the Leaders Fund Denys Andrushchenko. They spoke about how to be an effective volunteer, in particular of BUR, and make an impact without necessarily participating in a camp.

“We focus on the identification, development and strengthening of the BUR volunteer network and enabling its members to initiate positive changes in their communities. Our engagement with volunteers does not end at camp. Among the hundreds of young people who come to the volunteer camps, many have their project ideas,” Mr. Didula said. “We build young leaders’ capacity for learning and applying new knowledge and skills in the field of social activism through participation in a training program for 50 called the ‘BURLAB Responsibility Laboratory’ and subsequent implementation of their mini-projects in communities.”

BURLAB is a 10-day project management school for BUR volunteers, where they learn how to implement their own social and business projects. The school provides maximum information and tools on project management, fund-raising and public relations. As part of BURLAB, the team holds the “Leadership in Mountings,” a two-day teambuilding program where they focus on teamwork, responsibilities and roles based on BUR values, trust and understanding of the BUR-mission. Thirteen teams participated in the most recent BURLAB and presented their mini-projects at the end of the training. The team will continue mentoring BURLAB mini-project teams in 2020.

“The Building Ukraine Together project, which began with a simple desire to help, has evolved into a national mechanism for aid and community development,” Mr. Didula continued. “Ukraine is full of ideas. There is often a lack of people with the confidence and resources to bring these ideas to life. And when volunteers from all over Ukraine come together, communities can accomplish more than they thought possible.”

Shining examples of such communities that emerged very recently could be seen at the BUR birthday celebration. The team from Pereyaslav (Kyiv region) arrived at the birthday party and brought a gift – a painting by Oleksandr Chubai, a person with a disability. The artwork now decorates the wall in BUR’s Lviv office and is reminiscent of the warm autumn when Mr. Chubai and BUR volunteers cooperated to create the youth art space Jam Toloka. Then BUR helped Mr. Chubai to repair his house. Mr. Chubai met his future wife while working on the project. As a result, several BUR volunteers combined a work trip to Pereyaslav with attending Mr. Chubai’s wedding.

“I have known Oleksandr since childhood. We live in one area, almost neighbors. But only after his injury did we became closer,” recalled BUR local camp coordinator Ihor Yanchuk. “He became a stronger person. Doctors said that there was little chance of surviving the operation, but Sasha (as friends call Oleksandr) not only survived but also started an active lifestyle, despite his wheelchair. After his injury, a lot of friends lost contact with him. Then his mother died. I pulled him into Jam Toloka. At first, he was ashamed to go out, but eventually, he realized that this is normal and life goes on.”

Mr. Yanchuk saw in Mr. Chubai the potential of a pyrography artist. When Mr. Chubai became a member of Jam Toloka, he attracted both private customers and orders from social city projects. And one of his paintings, of course, he gifted to BUR.

“There is so little practical training in Ukrainian education that we are forced to make ‘learning by doing’ possible,” explained Mr. Didula, speaking about the main principles of BUR training. “Project teams, with meager funds, learn to plan, set KPIs [key performance indicators]and evaluate their work. Most Ukrainians lack entrepreneurial thinking and fear responsibility, but not our volunteers. We are deeply changing Ukraine.”

“The youth centers that have emerged after the Building Ukraine Together camps play a role similar to that of the Ukrainian Catholic University in Lviv. They form an environment of people who trust each other and share common values. And this, in turn, gives one a sense of belonging and a desire to work for something greater than oneself,” Mr. Didula underscored. “We not only dream of a better Ukraine, but we are building it with our own hands.”