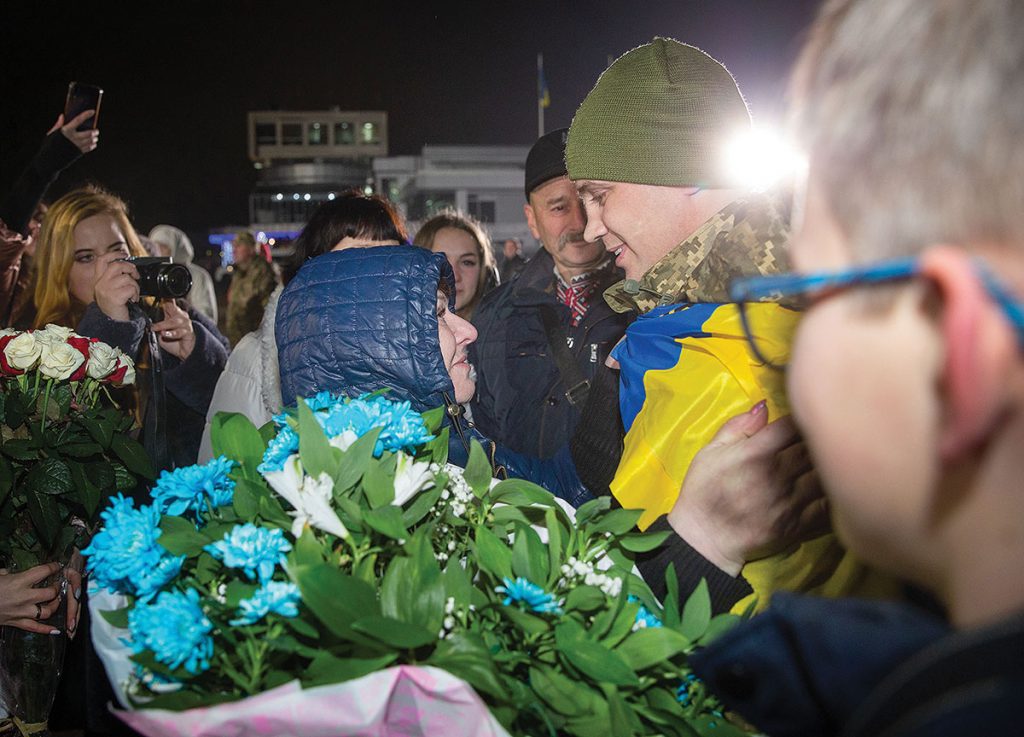 Presidential Office of Ukraine
A former prisoner of war is welcomed home. He was among the 76 detainees returned to Ukraine in a swap with the Russian-controlled occupation authorities in the Donbas.

KYIV – Ukraine and the Russian-controlled occupation administrations in the Donbas on December 29 carried out an exchange of prisoners. Welcomed by many, it was strongly criticized by others because of the terms on which it was made.

Seventy-six Ukrainian prisoners were returned in a swap for 127 people handed over to Russia’s proxies who, controversially, included five ex-Berkut officers suspected of mass killings of protesters during the Revolution of Dignity in 2014, as well as three pro-Russian militants convicted of a deadly terrorist attack in Kharkiv in February 2015.

Ukraine’s President Volodymyr Zelenskyy has defended his decision to “return our heroes” even at such a cost, and numerous Western leaders and institutions have supported his actions. At home, however, he has been accused by political opponents and civil society activists of conceding too much and undermining ongoing criminal proceedings.

Mr. Zelenskyy has made the freeing of Ukrainian prisoners a priority and he managed to secure a swap on September 7, 2019, of 35 Ukrainian prisoners held by Russia, including filmmaker Oleh Sentsov, for 35 people detained by Ukraine. A further exchange of prisoners by the end of 2019 on the basis of “all for all” was agreed to at the summit in Paris on December 9 of the Normandy Four countries – Ukraine, Russia, Germany and France. The four leaders also agreed that a general ceasefire would be established along the entire frontline in eastern Ukraine by the New Year.

However, these hopeful achievements were soon placed in doubt. When the Trilateral Contact Group (TCG) consisting of Ukraine, Russia and the Organization for Security and Cooperation in Europe (OSCE) met in Minsk on December 18, 2019, no agreement was reached on a prisoner swap. The Ukrainian side announced it would keep pressing for the negotiations on this delicate issue to continue. Evidently, they did. There was a breakthrough five days later, but what emerged was rather different from the “all for all” formula.

At this stage Moscow had ruled out handing back more of the prisoners it is holding in Russia and Crimea. Moreover, it had also made the freeing of Ukrainian prisoners of war and detainees incarcerated in the so-called Donetsk and Luhansk people’s republics contingent on Kyiv releasing individuals convicted or suspected of political killings.

That Kyiv had agreed to these terms became evident as, on the eve of the exchange, in quick succession, Ukrainian courts freed a number of such suspected killers. On December 28, a court in Kharkiv sentenced three men to life imprisonment for a terrorist attack but promptly released them from custody. And in the capital, the Kyiv Court of Appeal freed from custody three former Berkut officers charged with shooting down 48 Maidan activists, and freed from house arrest two other defendants.

Representatives of the families of the victims and civil society activists were appalled. They stressed that the ex-Berkut officers, all Ukrainian citizens, were not involved in the conflict in eastern Ukraine and should not be included in the swap. In a joint statement addressed to President Zelenskyy, they warned that it would undermine “trust in the justice system in Ukraine,” and lead to “division in society…, a wave of protests and social upheaval.”

As the exchange began, scores of people protested at a detention center in Kyiv where three of the ex-Berkut officers were held. Political opponents, most notably former President Petro Poroshenko’s European Solidarity party also joined in the condemnation.

Significantly, Mr. Sentsov also spoke out. Kyiv was giving up “real murderers,” while other Ukrainians remained in captivity in Russia, Crimea and other occupied areas. “All that Ukrainians fought for” was being undermined, he stated.

Mr. Zelenskyy acknowledged that the decision to make an exchange on such terms had been a “difficult” and “political” one. He said he was well aware that it involved freeing the killers of “the victims of the Kharkiv terrorist attack” and those suspected of shooting down the activists on the Maidan. But, as he put it, “the heroes we lost, unfortunately, can’t be returned. And returning the living heroes is my duty as president of Ukraine.” He reiterated that this remained a priority for him. “That is why, in particular, I went to Paris” [for the Normandy Four summit], he explained.

The exchange of detainees between the Ukrainian side and Russia’s proxies occurred at the Mayorske checkpoint in the Donbas. Curiously, representatives of the Ukrainian media were not allowed to report directly from the site, and coverage was provided by the website of the Presidential Office of Ukraine. The freed prisoners were then flown to Kyiv.

Speaking at a press briefing at Boryspil Airport after the plane with the released Ukrainians had landed, Mr. Zelenskyy expressed gratitude to the Normandy Four leaders, “because everything agreed on mutual release has been done. Eighty-one Ukrainian men and women have been freed. Five remained in the temporarily occupied territories for the sake of their loved ones. Seventy-six returned to a free and safe Ukraine. They will celebrate the New Year with their parents, families, children and friends,” he said.

Mr. Zelenskyy stressed that the release of the ex-Berkut officers was a precondition of the “all for all” exchange. In order to return “our heroes… a difficult decision, a political decision” had been required. He had met with families of the Heavenly Hundred who had been slain on the Maidan. “Our fighters, our military, our journalists, they are all heroes. And I’m sure that our priority is to return our people,” he argued.

Referring to the ex-Berkut officers who had been swapped, the president noted: “They look different from our guys. They aren’t emaciated, they haven’t been beaten up by other people – over these five years their life was pretty much tolerable.” He suggested that if they had been found guilty, they could have been sentenced to five or six years in prison, meaning they might be eligible for release because of the time already spent in custody, during which for some unexplained reason they had not actually been convicted.

President Zelenskyy’s partners in the Normandy Four format, the leaders of Germany and France, both welcomed the prisoner swap as a positive step, as did a number of other foreign leaders. Nevertheless, the European Union emphasized: “We take note of the exchange of people related to the tragic events on Maidan in 2014. We expect all accusations will continue to be investigated and the parties concerned to ensure that those responsible are brought to justice.”

After the swap, Ukrainian officials, including the president, noted that the government will continue to work for the release of other Ukrainian citizens held in Crimea, Russia and the occupied Donbas. Latest estimates indicate that their number might still be as high as 300. The problem is complicated by the fact that there is confirmation about 100 people held in the occupied parts of the Donbas and little or no documentation on around another 200 believed held in captivity.

On December 31 President Zelenskyy followed up by raising this issue in his telephone discussion with Russian President Vladimir Putin. According to a statement from the Presidential Office of Ukraine, the two presidents exchanged New Year greetings. Apart from welcoming the conclusion of a contract for the continuation of Russian gas transit via Ukraine, they agreed to immediately start coordinating the lists of Ukrainians, including Crimean residents, incarcerated in Crimea and Russia, as well as Russians incarcerated in Ukraine. They also expressed hope that the complete ceasefire along the demarcation line in the Donbas agreed to in Paris will be implemented as soon as possible.

Later that day, in his first New Year’s Eve address to the nation, President Zelenskyy pleaded for understanding and unity around the issues of war, peace and the return of captives and territory. He reminded his audience that “when our sailors and captives came back home, we cried with happiness – Ukrainian speakers and Russian speakers, ordinary housewives and successful lawyers, as well as the president of Ukraine.”

“Our national idea,” he proposed, should be “to learn to live together with respect, for the future” of the country, around a shared vision of “a successful and prosperous country where there is no war, a country that has brought back its people and its territories.”