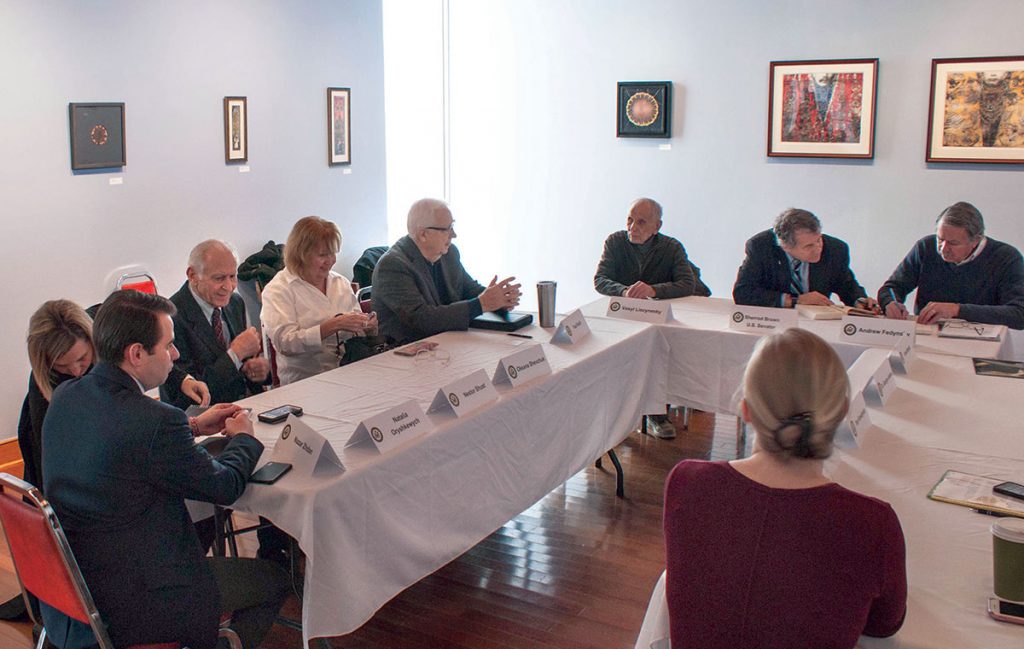 Walter Ciszkewycz
Ukrainian community leaders and activists at a meeting with Sen. Sherrod Brown (second from right) held at the Ukrainian Museum-Archives in Cleveland.

CLEVELAND – Sen. Sherrod Brown (D-Ohio), a vice-chair of the Senate Ukraine Caucus, on December 13 met at the Ukrainian Museum-Archives (UMA) in Cleveland with 15 leaders of Ohio’s Ukrainian organizations.

Marta Liscynesky-Kelleher, president of the United Ukrainian Organizations of Ohio, welcomed the senator on behalf of more than 40 member organizations and thanked him for his long-standing support of Ukraine.

In his remarks, Sen. Brown said he had requested the meeting to gather information about Ukraine and to assert his firm support during this trying time for Ukraine’s sovereignty and independence. As ranking member of the Senate Banking Committee, he said he oversees sanction policy against Russia over its illegal annexation of Crimea in 2014 and subsequent invasion of the Donbas. After a brief statement, he turned to the representatives of Ohio Ukrainian organizations for their reports and recommendations.

Drs. Maria Strus and Yuriy Jaskiw, as well as Nadiya Petriv, head of the Cleveland Maidan Association, informed the senator about community efforts over the past several years to provide medical support for Ukraine’s military, wounded veterans and families of fallen soldiers.

Oksana Shevchuk, head of the Ohio chapter of the Ukrainian National Women’s League of North America, spoke of local and national efforts to support refugees, promote education about Ukraine among the general public in America who are unaware of Ukraine’s tragic history, and engage in community activism.

Cleveland elder statesmen Vasyl Liscynesky, a former long-time president of the United Ukrainian Organizations, and Nestor Shust, a leader of Plast Ukrainian Scouting Organization and other organizations, spoke about countering the pernicious Russian propaganda that is permeating some American media and political circles. Ihor Kowalysko, a volunteer at the UMA and vice-president at a leading advertising firm in Michigan, suggested measures the U.S. should take to counter those measures.

Paul Burlij, UMA board president and a veteran of the U.S. military, advised on contacts between the U.S. and Ukraine, particularly on strategic-military issues. Others encouraged the senator to support U.S. diaspora efforts to assist internally displaced refugees, and to promote education about Ukraine among the general public in America and support institutions like Ohio State University’s Slavic Studies program (which encompasses Ukrainian studies), the Ukrainian Catholic University in Lviv, Oberlin College in Ohio and others.

Sen. Brown assured the Ohio leaders of his firm support for Ukraine and showed a nuanced knowledge of Ukrainian history and current cultural/political affairs, asking well-informed and pointed questions regarding issues about which he was not sure and requesting recommendations on how to coordinate action across the aisle, specifically mentioning his colleague Rob Portman (R-Ohio), chair of the Senate Ukraine Caucus.

The meeting ended with Sen. Sherrod inviting the community to keep in touch with his foreign policy staff on issues related to Ukraine so that he might be informed of developments and community concerns.

He then took a brief tour of the UMA and said he was impressed with the size, scope and quality of the UMA library holdings.

Later that day, the UMA had its annual Christmas party and Sen. Brown’s Ohio director, John Ryan, attended and stayed for about two hours, mingling with many participants and gathering further information about Ukraine.