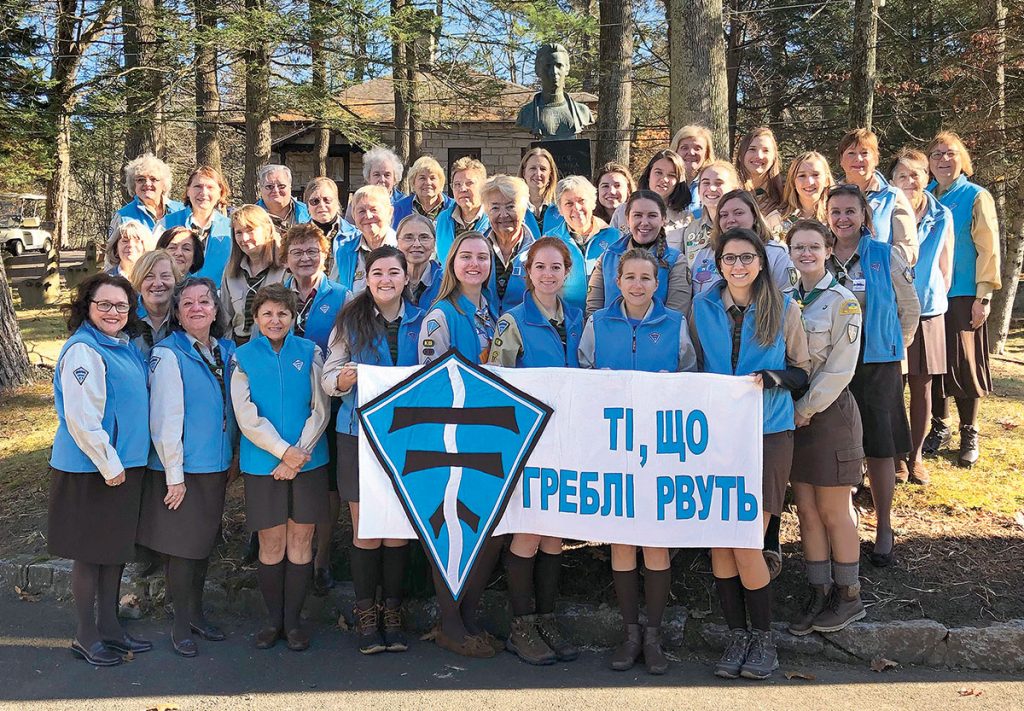 The program of the conference included joint and separate meetings of the two branches of “Hrebli,” as well as a get-together on Friday evening, before formal conference sessions began the next morning.

During the Saturday morning session, the Hrebli were joined via Skype by representatives of the sorority from Ukraine and Argentina.

Nataliya Kyyak related that there are now 44 senior Hrebli in Ukraine and a like number of younger adult members. The sorority is active in the Kyiv, Lviv and Ivano-Frankivsk oblasts, as well as in Uzhhorod, Chernivtsi, Rivne, Severodonetsk and Kharkiv.

Adriana Cham, who heads the Plast national executive board in Argentina, said that sorority members lead the Plast branch in Buenos Aires. She pointed out that Plast in Argentina celebrated its 70th anniversary in 2019.

Sorority members are active also in Germany and Australia, as well as Sweden, where Motria Fedoriw Jaremko (formerly of the U.S.) organized Plast activities for cub scouts. Thanks to her initiative, Plast now has a group in Sweden that encompasses both cub scouts and scouts, many of them children of families who have arrived from Ukraine.

Members of the sorority in Ukraine, Canada and the United States are active in local, national and international bodies of Plast, as well as in community endeavors. In Ukraine, members assist the Joint Forces Operation and one sorority member was elected to the Verkhovna Rada. Present at the Soyuzivka conference was Christina Maciw of Montreal, who lived in Kyiv for 28 years and was active in Plast in Ukraine.

The leader of the senior sorority of “Ti, Shcho Hrebli Rvut,” Dr. Christine Kochan, reported on two years of work and provided a summation of the recent meeting of the Conference of Ukrainian Plast Organizations held in Germany. In addition, she commended the work of editor Olenka Yurchuk in releasing two very fine editions of the Hrebli periodical Vistovyk.

Among the topics of discussion were the by-laws and regulations of the sorority, which need some updating, and the history of “Ti, Shcho Hrebli Rvut,” which is in the works. It was noted that preliminary planning for the upcoming 100th anniversary of the sorority should be contemplated.

Members of the young adult branch of Hrebli reported that they intend to become more active in organizing and conducting the “Shkola Bulavnykh” camp counselor training program in the U.S., and that orders are being taken for sorority-themed clothing and accessories.

The younger Hrebli are very active in Plast branches in the U.S. and in leading Plast activities for scouts. Their leader is Ann Jaskiw. During the biennial conference, seven new candidates for membership were accepted and initiated into the sorority’s ranks.

A highlight of the weekend was a creative scavenger hunt that had groups of Hrebli of all ages roaming the Soyuzivka property to find listed items and information, and snap photos of their group performing assigned tasks. After dinner on Saturday evening, all enjoyed a “campfire” in the Main House lobby led by Andreya Pencak, complete with Plast skits and songs.

The final session of the conference was devoted to resolutions and recommendations for the next two-year term, as well as elections of a new leadership for the senior sorority.