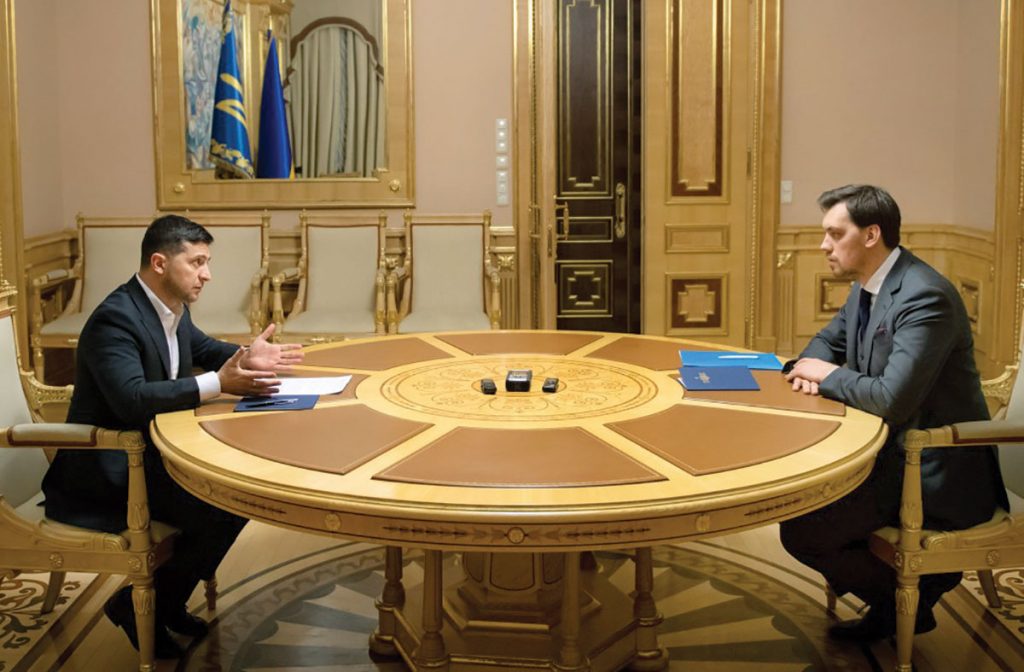 Presidential Office of Ukraine
At a meeting with Prime Minister Oleksii Honcharuk on January 17, President Volodymyr Zelenskyy said, “I have decided to give you and your government a chance if you resolve some things that are very important today and are of concern to our society.”

KYIV – The internet was abuzz with speculation about Ukraine’s Prime Minister Oleksiy Honcharuk on January 15. The first splash of activity came after an unknown source leaked a recording on which Mr. Honcharuk is allegedly heard discussing the economic incompetence of President Volodymyr Zelenskyy with a senior executive of the National Bank of Ukraine, the minister of finance and others. News about the leak was followed by the presumption that the prime minister would be resigning.

In subsequent days, Messrs. Zelenskyy and Honcharuk played what seemed to be a heavily scripted performance, which started with a statement by the prime minister and ended with the president giving him a second chance. The audience for this performance was confused, because the decision about a government’s resignation is the prerogative of the Verkhovna Rada and not the president.

“Zelenskyy has a very primitive, I mean a simple, understanding of economic processes,” says a voice similar to Mr. Honcharuk’s. “He understands: there is a balance of payments, which has not improved much, and the hryvnia has strengthened, anomalously. He is seeking an answer to this question… He has no answer.” And to explain this, the speaker suggests that the hryvnia had strengthened due to the confidence of the population, because earlier distrust had made it economically weaker. “He [the president]doesn’t have that answer in his head,” continues the voice on the recording. “We have to show it, and we have to… to look very, let’s say, realistic. Honestly, as long as we don’t have an answer to this question in the president’s head, he’ll have an empty place there…”

The recordings appeared on the night of January 15 on a YouTube channel called “How to Cheat the President” that was created the same day. On the recording, voices similar to those of Prime Minister Honcharuk, Minister of Finance Oksana Markarova, and National Bank of Ukraine deputy governors Kateryna Rozhkova and Dmytro Solohub speak about the situation in the economy and how to explain it to President Zelenskyy. The conversation allegedly took place on December 16, 2019.

In one of the most quotable phrases from the conversation, a voice similar to Mr. Honcharuk’s says he is a lawyer and admits that he himself is an ignoramus in the field of economics.

The leak was the first in a series. The second one, from the same meeting, appeared later that day, and the third was leaked the following morning. On all of them, participants are heard discussing an upcoming meeting with the president and financial predictions for the future.

After the recording was released and media spread the news, a rumor appeared that Mr. Honcharuk was resigning as prime minister.  Next came a statement, released by the Cabinet of Ministers, which said that the ministers do not have any information about authentication of audio or video distributed on the Internet, and that any information about Mr. Honcharuk’s resignation is invalid.

However, on the morning of January 17, Mr. Honcharuk submitted a letter of resignation to Volodymyr Zelenskyy.

“In recent days, you have all witnessed the events unfolding around files assembled from snippets of government meetings and leaked on the Internet. Their content artificially creates the idea that my team and I do not respect the president, who is our political leader,” Mr. Honcharuk  posted on Facebook on January 17. “Many groups of influence, seeking access to cash flows, benefit from it. But this is not true. I came to this post to execute the president’s program. He is a model of honesty and decency for me. However, to take away any doubt about our respect and confidence in the president, I wrote a resignation letter and submitted it to the president with the right to bring it into Parliament,” Mr. Honcharuk explained. “He is a man in whom the Ukrainians have expressed unprecedented confidence. And he has the right to evaluate the effectiveness of every member of his team which is changing the country.”

Mr. Honcharuk also took advantage of the great attention generated by the leak to communicate other messages. He began his Facebook post with a summary of achievements: “In the last four months, the president’s team has worked hard to change the country. In this short period, we have succeeded in completing many tasks. On various fronts, we prepared our gas transmission system for the transition to European rules, which allowed us to sign a new transit agreement and reduce the payment for heating for most Ukrainians by up to 30 percent; we replaced the top executives of state authorities; we successfully negotiated with the International Monetary Fund and reached a working-level agreement. All these allowed Ukraine to improve its position significantly in international rankings and halve the value of hryvnia loans from 18 percent to 9 percent.”

Mr. Honcharuk added that his team had also prepared a “solid foundation for the country’s development in 2020” – in particular, to launch several online services in the coming months that “will forever simplify people’s lives.” The prime minister said the main challenge is to overcome corruption in the public sector, saying that “in a few months it is difficult to destroy criminal schemes that have been built for decades.” He called his Cabinet “a team of decent people” and assured that “there is no corruption at the top level in the government.”

According to Article 15 of the Law on the Cabinet of Ministers, the prime minister has the right to declare his resignation to the Verkhovna Rada, and the Rada must consider the matter no later than on the 10th day after the resignation letter is received if it is received during a regular session of the Verkhovna Rada, and no later than the first plenary week of the next regular session if such a statement is received during the inter-sessional period. The prime minister is dismissed from the date of the decision on his resignation at the plenary session of the Verkhovna Rada. The Rada’s decision to dismiss the prime minister results in the resignation of the entire government. According to Ukrainian law, the issue of a government resignation cannot be considered within a year of the approval of the Cabinet’s program of activities. Thus, the Honcharuk government should be safe until October 2020.

On the evening of January 17, the Presidential Office posted a video of Mr. Zelenskyy’s dialogue with the prime minister, during which the president said that Mr. Honcharuk’s Cabinet “should be given a chance.” At the same time, Mr. Zelenskyy set several tasks for the head of the government, appointed by the parliamentary coalition and accountable to the Verkhovna Rada. Judging by the tone of the conversation, these tasks are a condition for the continued existence of the current Cabinet of Ministers.

“I have decided to give you and your government a chance if you decide on certain things that are very important today and are of concern to our society,” Mr. Zelenskyy said, addressing Mr. Honcharuk. The head of state made it clear that he opposes the resignation of the government in the current conditions. “Now it is not the time to shake the country economically and politically,” the president emphasized.

Mr. Zelenskyy also made it clear that he was expecting the resignation of some ministers without specifying to whom he was referring. “I ask you very much to find weaknesses and to replace these or those heads of ministries due to their professional data,” the president told the prime minister.

Mr. Honcharuk, in turn, thanked the president for his trust and promised to prepare an interim report on the work of the Cabinet of Ministers by February 4 and submit it to the Verkhovna Rada. According to Mr. Honcharuk, the national deputies will be presented with the “concept of a strengthened government” and its partial organizational reformatting.

In the meantime, President Zelenskyy ordered the Security Service of Ukraine (known by its Ukrainian acronym SBU) to get him the names of those responsible for the recording in Mr. Honcharuk’s office. He gave the SBU two weeks to find out who is behind the leak.