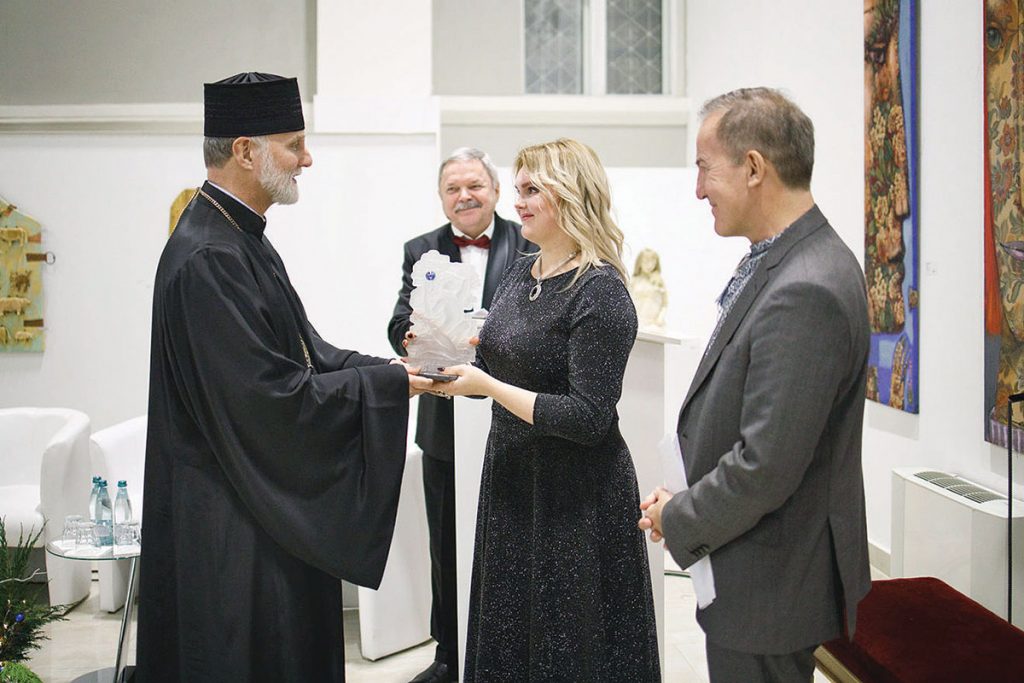 KYIV – The Institute of Leadership and Management of Ukrainian Catholic University presented Dmytro Karabchuk and Julia Melnyk with the Light of Justice award for their impact on saving Ukraine’s ecology and fighting against climate change. The event was held on December 13 at the National Museum of Taras Shevchenko in Kyiv.

The award is intended to draw attention to the value of leadership and the importance of moral principles in leadership, as well as to popularize examples of such leadership in Ukrainian society.

Most of the leadership of the Ukrainian Catholic University gathered in Ukraine’s capital that Friday night; some of them arrived especially for this occasion from Lviv. Among them were UCU’s rector, the Rev. Dr. Bohdan Prakh, UCU Director of Development Olha Zarichynska and Institute of Leadership and Management Director Natalia Bordun, who is also a coordinator of the award. Myroslav Maryno­vych, a human rights activist and former Soviet political prisoner who is considered modern Ukraine’s moral authority, was a host of the event. The president of the Ukrainian Catholic University, Archbishop-Metropolitan Borys Gudziak, a co-founder of the Light of Justice award, flew in from the United States.

The Light of Justice award committee selected the laureates from among those who have demonstrated moral leadership in the areas of ecology, climate change and renewable energy. For the first time since the inception of the award in 2010, the award was presented to two people, emphasizing the importance of the topic of environmental protection.

After the introductory words of Mr. Marynovych and Metropolitan Borys, the audience enjoyed a documentary about the late Anastasia Shkilnyk, a co-founder of the Light of Justice award. The video depicted the life of her father and explained what inspired her to found this award. “This award honors exceptional people for their ability to ignite the light of justice in the dark crevices of the human soul and show the way to a more humane society,” she noted. The second part of the film pointed out why the 2019 award focuses on ecology.

When the film ended, Metropolitan Borys, who leads the Ukrainian Catholic Church in the United States, presented the first laureate of the award. Ms. Melnyk is an eco-activist, and co-founder and head of the Ecological NGO Ecoltava. According to the project’s website, it is an independent association of experts and environmental activists, based in Poltava but operating throughout Ukraine, whose aim is to help build communities in which waste is sorted and recycled, and energy is consumed rationally. Ms. Melnyk is also an expert at 350.org, which promotes the development of renewable energy in the countries of Eastern Europe, the Caucasus and Central Asia.

“It is difficult to work in the climate movement, because sometimes it is difficult to love people who are destroying nature. Furthermore, the changes we try to make are slow – they take a lot of energy. That’s why we all often get burned out. But I see activists as phoenixes who die and are born again to bear their light of justice again,” Ms. Melnyk said in her acceptance speech.

Metropolitan Borys then announced the second award winner: Mr. Karabchuk, a forest consultant, project manager of Forest Watch and expert advisor to the Danube-Carpathian Program of the World Wildlife Fund (WWF) in Ukraine. Partnering with environmental NGOs, Mr. Karabchuk worked with the U.S. Forest Service and Interpol to identify and combat illegal logging, develop public control over forestry activities, improve communication between foresters and the public, and implement modern foreign policies in Ukrainian legislative practices. His work was featured in an investigative film on the topic of illegal deforestation by Hromadske TV. The guests of the ceremony viewed a part of the film before Mr. Karabchuk’s speech.

“This award is not about my personal achievements. I want to emphasize that this award is recognition of the importance of the topic of environmental protection and its rational use, not only for the present but also for the future,”, said Mr. Karabchuk.

The winners received a crystal statuette made by the well-known master of glass Stanislav Kadochnikov. The statuette depicts a person who reaches for light, symbolizing the desire for the ideals of freedom and justice.

Following the official part of the ceremony, the guests continued networking with the Yakiv Tsvetinskyi Quartet playing in the background.

The Light of Justice award, which is presented for moral, spiritual and ethical leadership, was founded in 2010 by Ms. Shkilnyk, a Canadian of Ukrainian origin (who died in 2014) and Father Gudziak, then rector of the Ukrainian Catholic University, in honor of Anastasia’s father, Dr. Mykhailo Shkilnyk, a lawyer, and public and political figure during the 1917-1920 liberation movement in Ukraine.

During the time of the Ukrainian National Republic, Mykhailo Shkilnyk first worked in the Ministry of Economy and Trade, and later headed the Consular Service Department in the Ministry of Foreign Affairs. After the overthrow of the UNR, he returned to western Ukraine, where he worked as a judge in the city of Peremyshliany.

During the Nazi occupation, he was appointed mayor of Peremyshliany. In this position, at the risk of his own life and the safety of his family, he saved the life of Rabbi Aharon Rokeach, known as the Great Rabbi of Belz, the leader of Orthodox Jews in western Ukraine. Thanks to Shkilnyk’s efforts, many families were rescued in Peremysh­liany. He later emigrated to Canada with his family. His memoirs, “Ukraine in the Struggle for Statehood in 1917-1921,” were published in Toronto in 1971.