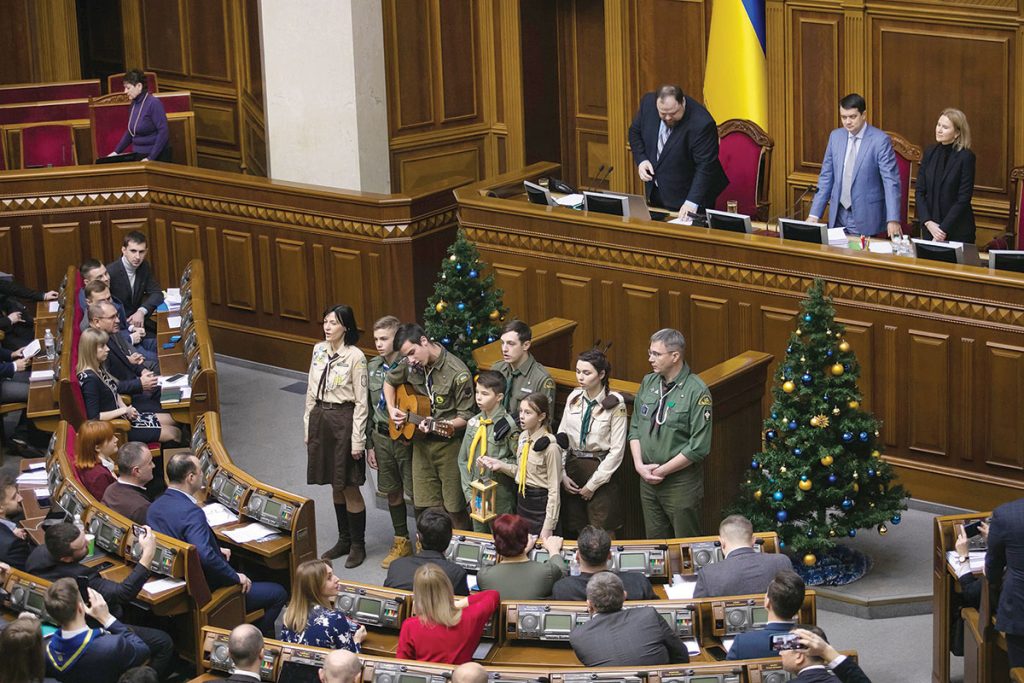 Eugene Zavhorodniy
Plast members bring the Bethlehem Peace Light to the Verkhovna Rada on December 17, the same day the new law on state recognition of Plast was passed.

KYIV – With 316 votes on December 17, Ukraine’s Parliament backed a law on the state recognition of Plast – National Scout Organization of Ukraine. This is the second affirmative vote on the legislation. On May 30, 2019, members of the previous convocation of the Verkhovna Rada had voted in favor of the earlier edition of this bill. But then, after more than three months, President Volodymyr Zelenskyy rejected the law and returned it to the Verkhovna Rada with his remarks.

Now, after the Verkhovna Rada’s Youth Committee backed the second edition with Mr. Zelenskyy’s remarks and the Rada voted to approve the law, it is up to the president to sign and enact the law on state support of Plast.

For 23 years now, Plast scouts have brought the Bethlehem Peace Light to Ukraine and spread this symbolic fire throughout the entire country. They share it with Ukrainian soldiers in the east, people in hospitals and orphanages, churches. They organize public events and share the Peace Light with the people of Ukraine, and they also bring it to Ukraine’s officials. Plastuny have also brought the Peace Light to the Verkhovna Rada for five years in a row, and this year was no exception.

Parliament officials confirmed that on the morning of December 17, young Plast scouts could come to the Rada. Members of Ukraine’s largest youth organization entered the main hall after the start of the sitting. A group of Plast members in scout uniforms sang the traditional Ukrainian Peace Light song and passed the light to members of Parliament. The head of Kyiv’s Plast branch, Ivan Bratsiun, gave a speech at the Rada and emphasized the symbolic meaning of the tradition. Verkhovna Rada Chairman Dmytro Razumkov accepted the Peace Light and placed it at the presidium.

Formation of the voting agenda in the Verkhovna Rada is an unpredictable process. The vote on the Plast law had been predicted to be held a few weeks earlier, but it was postponed. At the time of the Peace Light ceremony in the Rada, there was information that the debate and voting on state support for Plast were No. 18 on the agenda. The expectation was that the vote would take place that evening or even the next day. But Ruslan Stefanchuk, first deputy chairperson of the Verkhovna Rada, proposed that the vote on state support for Plast be held immediately.

The 316 votes cast in favor of the Plast law are far beyond the minimum 226 needed for a bill to pass. The Parliament’s major faction, Servant of the People, gave 215 votes for the legislation with only one against. Five other factions, European Solidarity, Batkivshchyna, For Future, Voice and Trust, voted for approval, while the pro-Russian Opposition Platform voted against. One of the Opposition Platform’s national deputies, Yuriy Pavlenko, ex-Minister of Youth and Sport, voted in favor of the new law on recognition of Plast.

Perhaps it was the Peace Light that propelled members of Parliament to make a decision, but a similar episode had occurred on May 30. On that day, words of support for Plast by the primate of the Orthodox Church of Ukraine, Metropolitan Epifaniy, had raised the pressure on the national deputies, most of whom publicly backed the new Church and its leader. Nonetheless, the president did not sign the bill.

This time, nothing stands in the way of President Zelenskyy’s signature. The bill was revised according to his comments and was backed by the Rada’s Youth Committee, which is probably the reason the Servant of the People faction voted in favor.

“As a result of the revision, this law has even changed its name. It is now called: ‘On the recognition of the Plast movement and the principles of state support for Plast, scout movement.” Just as in the title, there were changes throughout the text of the bill,” explained Yurko Yuzych, head of Ukraine’s Plast Board.

“The law now does not mention ‘the Plast organization,’ or any other organization. Instead, the new definition, ‘Plast movement (Plast),’ which is a Ukrainian scout movement, was introduced. And next to it is the definition of ‘Scout Movement (Scouting).’ Instead of the wording ‘Ukrainian Plast (scout) movement’ proposed by the president, there appeared to be some confusion throughout the text – at first glance, the expression: ‘Plast, scout movement’ (using commas, not the word ‘and’). The president’s proposal was quite satisfying to Plast because it was the wording of dozens of independent Plast organizations operating around the world – from Sydney to Edmonton, and from Avdiyivka to Berehove,” Mr. Yuzych noted.

The official reason for the law’s rejection four months ago was that the legislative preference for an NGO (in this case, Plast – National Scout Organization of Ukraine) would violate the Constitution of Ukraine. Therefore, changing the wording to “Plast movement (Plast)” would make it constitutionally acceptable.

However, not everyone was happy with this decision. And it did not suit some scout leaders in Ukraine, because their role was in brackets. After tough negotiations, representatives of Plast organizations voluntarily agreed to extend the originally proposed Plast law to one that includes scout organizations in general.

It is important to note that other scout organizations are not as homogeneous in their values as Plast is. “When hundreds of volunteer plastuny went to the front in 2014, the leader of another Ukrainian scout organization (which is officially recognized by the World Scout Movement) disappeared in an unknown direction. And his father, the governor of one of the regions of the Russian Federation, to which he had recently brought groups of Kyiv scouts, organized groups of volunteer fighters in the so-called LDNR” [the Luhansk and Donetsk people’s republics], recalled Mr. Yuzych.

“It’s hard to believe now, but in 2009-2013 some scout leaders tried to affiliate Plast into a structure whose parts were quietly working on the money of a member of the [Russian] State Duma. He later voted for the occupation of Crimea. That is why, in the updated law, the terms ‘Plast’ and ‘scout’ are not considered synonyms. That is why it was important for Plast organizations around the world that the law recognizes the historical contribution of the Plast movement to the achievement and establishment of Ukraine’s statehood. And that is why the law has added new notions that the ‘Plast, scout movement’ should take care of the European and Euro-Atlantic integration of Ukrainian youth,” he related.

This new law supports the Plast movement and is not limited to Ukraine. Plast organizations outside of Ukraine can also count on a separate state social program that will finance the implementation of specific key performance indicators (KPIs), which according to this law may be agreed by the Ukrainian government and Parliament. The bad news is that, at this point in time, this is only a theoretical option, and no mechanisms have yet been proposed. Furthermore, it might not be possible to use this law in seeking financial state support even for Plast in Ukraine in 2020. The program of support could become possible for 2021.

“2020 will be a year of financial survival,” said Mr. Yuzych. It is hard to predict when exactly President Zelenskyy will sign the Plast law. Furthermore, there is still the slightest chance that he will not. But it is highly unlikely that the president will reject the decision made by his parliamentary faction.

In the meantime, Plast in Ukraine isn’t waiting for the final signature and continues its campaign to raise 10.5 million hrv to not only survive in 2020 but to develop and strengthen its presence in the eastern and southern regions of Ukraine. (Additional information on Plast programs and financial plans, as well as an option to support the organization, may be found at donate.plast.org.ua)