2019: Sports: Ukraine’s athletes and the diaspora’s, too 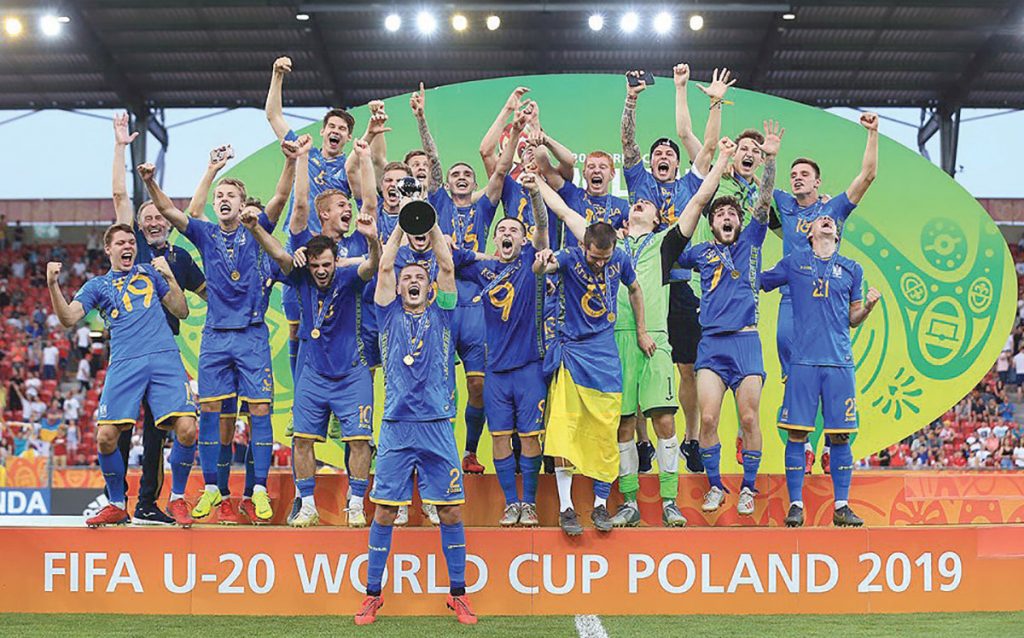 www.facebook.com/fifau20worldcup
Ukraine’s under-20 team celebrates its come-from-behind win against South Korea on June 15 at Lodz Stadium at the FIFA U-20 World Cup in Poland.

Champions. Ukraine had many of them in 2019, as the sports world continued to witness Ukrainians achieve outstanding athletic performances. Lady Ukrainian tennis stars volleyed to victory, Ukrainian boxers punched their way to knockout wins, Ukrainian judokas threw down opponents into triumphant pins, and Zhan Beleniuk was selected as No. 1 in the world of Greco-Roman wrestling.

The surprises of the past year were team efforts: Team Ukraine winning soccer’s U-20 World Cup, the Ukrainian national team winning Group B to qualify for Euro 2020 and Team Ukraine’s phenomenal third-place showing at the 2019 European Games.

Individually and collectively, it was yet another banner year for Ukrainians in sports.

In 2019 Ukrainian athletes won some 125 gold medals in championship tournaments as reported by The Ukrainian Weekly. Ukrainians were most proficient in athletics (19 gold medals), judo (19) and swimming (18). Below is a brief recap of the gold medal victories and top headlines, alphabetically by sport, including a review of the European Games, Summer Universiade, European Youth Summer Olympic Festival and an incredible global achievement by one Oksana Litynska.

BASKETBALL news saw the Los Angeles Lakers trade Sviatoslav Mykhailiuk to the Detroit Pistons in early February in exchange for Reggie Bullock. Kyle Kuzma (Ukrainian on his mother’s side) was growing into NBA stardom with the Lakers, while Canadian Kelly Olynyk heated up in Miami. After five frustrating seasons with Phoenix, Alex Len was granted a fresh start with the Atlanta Hawks, accepting a two-year, $8.5 million guaranteed deal.

In BIATHLON Ekaterina Bekh won two gold medals at the Junior World Championships January 27-February 2 in Slovakia, finishing first in the 7.5-km sprint and the 10-km pursuit. Dmytro Pidruchnyi won gold in the men’s 12.5-km pursuit at the World Championships in Sweden on March 7-17, the first ever Ukrainian man to win gold. Olga Abramova won gold in the women’s 7.5-km sprint at the IBU Cup in Italy on March 14-17.

Undefeated light heavyweight Oleksandr Gvozdyk retained his World Boxing Council (WBC) title with a TKO over Doudou Ngumbu on March 30 in Philadelphia when the challenger suffered a calf injury. Pound-for-pound BOXING king Vasyl Lomachenko retained his unified World Boxing Association (WBA) and World Boxing Organization (WBO) titles when he crushed Anthony Crolla with a knockout in the fourth round of a lightweight bout in Los Angeles on April 12. Lightweight Denys Berinchyk retained his WBO lightweight international title by unanimous decision against Nihito Arakawa on April 20 in Kyiv. Cruiserweight champion Oleksandr Usyk relinquished his four title belts in order to move up to the heavyweight division. Retired heavyweight champion Wladimir Klitschko joined the WBA board as a technical advisor. Vasyl Lomachenko successfully defended his two 135-pound lightweight titles and added a third (WBC) by winning a lopsided, yet hard-to-earn, bout with Luke Campbell in a fight between Olympic gold medalists in London, England, on August 31. Lightweight Denys Berinchyk again retained his WBO international title by unanimous decision over Patricio Moreno on October 5 in Kyiv. Oleksandr Usyk’s first step chasing titles in boxing’s heavyweight division on October 12 in Chicago was successful when he methodically broke down opponent Chazz Witherspoon with a seventh-round TKO. Previously unbeaten Gvozdyk suffered his first ever defeat at the hands of champion Artur Beterbiev in a lightweight boxing match held in Philadelphia on October 18, lasting 10 rounds.

Lyudmyla Mykhailovska, founder of the Ukrainian Federation of FIGURE SKATING and member of the National Olympic Committee of Ukraine, passed away at age 72 on February 13.

Matt Kuchar won the Sony Open of GOLF in mid-January at the Wai’alae Country Club in Honolulu, shooting a 22-under 258 – the third best in course history.

Ukraine’s rhythmic gymnastics team won two gold medals at the Rhythmic GYMNASTICS Grand Prix in France on March 30-31. The squad prevailed in the five-ball event and in the three rings/two clubs event. Nazar Chepurnyi won gold in the horizontal bar at the FIG Artistic Gymnastics Junior World Championships in Hungary on June 27-30.

In the world of HOCKEY, 48 players of Ukrainian descent were found on extended NHL rosters for the 2018-2019 season, with the Calgary Flames leading the way with five. Included were eight “second-generation” Ukrainian hockey players – sons of ex-NHL players, notably a pair of Tkachuks (Matthew and Brady). Parents Konstantin and Irina Lodnia with daughter Masha sacrificed big-time when they packed up their belongings and left Ukraine for a better life in Los Angeles. Benefitting most from their move was son Ivan, selected by the Minnesota Wild as the 85th overall pick in the 2017 NHL Entry Draft. Cale Makar won the Hobey Baker Award as top player in college hockey on April 12, played in the Frozen Four championship game on April 13 (UMASS lost 3-0) and scored a goal on his first ever shot in the NHL on April 14 when he suited up in Colorado’s 6-2 Stanley Cup playoff win over Calgary. Wayne’s brother, Keith Gretzky, filled the role of interim GM for the Edmonton Oilers following the club’s firing of GM Peter Chiarelli in early 2019. Tyler Bozak and Colton Parayko were two Ukrainian Stanley Cup champions on the St. Louis Blues squad that bested Boston in the finals. Noteworthy contributors to their teams included Calgary’s Matthew Tkachuk, Islanders defenseman Adam Pelech and Ottawa rookie Brady Tkachuk. In an exclusive interview with The Ukrainian Weekly prior to being inducted into the Ukrainian Sports Hall of Fame, ex-St. Louis Blues hockey star Wayne Babych admitted he enjoyed being set up by fellow-Uke Bernie Federko during his 54-goal season and his favorite teammate was younger brother Dave when the two joined forces briefly on the Hartford Whalers. Calgary signed Matthew Tkachuk to a three-year bridge deal with an average annual value of $7 million right before the start of the 2019-2020 season. As the 2019-2020 campaign faced off, The Weekly ranked the top 20 Ukrainian pucksters with two Tkachuks (Calgary’s Matthew at No. 1 and Ottawa’s Brady at No. 7) placing in the top seven. Stanley Cup champions Tyler Bozak and Colton Parayko ranked third and fourth.

Kyiv Baseball School Little League (LL) won the right to represent Ukraine at the European Regional Championships by winning the annual Ukraine LITTLE LEAGUE BASEBALL Championship held in Kremenets, Ternopil Oblast, on June 2-6. Seven teams competed with 84 players showcasing their skills, including 20 girls. In Kutno, Poland, Kyiv LL lost to Netherlands, defeated Austria, then lost to England in the July European Regionals. The first ever Ukraine Little League Baseball Championship for children age 8-10 was played in Kremenets on September 19-23, in an attempt to encourage schools and communities to teach basic baseball skills at an earlier age in Ukraine. Eight Little League programs competed with Kropyvnytskyi LL staging an amazing comeback (down 12-9 with two outs in the bottom of the final inning) to defeat Darnytsia, 13-12. This past summer, Ukraine’s Ministry of Sports funded a most-ever four national baseball teams and two national softball teams at various championships.

Lviv-born Oksana Litynska’s climb of Mount Vinson in Antarctica on December 28 concluded her incredible quest of climbing the highest peaks on each of the seven continents. In May she had reached the world’s highest point, Mount Everest, the third Ukrainian woman to accomplish this feat. Litynska is one of an exclusive club of some 70 women to have achieved the SEVEN SUMMITS program.

Shakhtar Donetsk defender Yaroslav Rakitsky signed a contract with FC Zenit St. Petersburg with an annual salary of 2.5 million euros, sparking outrage among Ukrainian SOCCER fans. Goalkeeper Andriy Lunin has a long future ahead with the Ukrainian National team as one of the top goalkeeping prospects in all of Europe. His young career has seen him play for Dnipro, Zorya Luhansk and CD Leganes (on loan from Real Madrid). Striker Roman Zozulya went from Dnipro Dnipropetrovsk to Spain’s Real Betis to Rayo Vallecano to Albacete Balompie, enduring unfounded attacks from the Spanish press and malicious fan abuse, before gaining much success on and off the pitch at his latest stop. Shakhtar Donetsk defeated Inhulets Petrove, 4-0, in the Ukrainian Cup final on May 15 at Slavytuch Arena in Zaporizhia, qualifying the club for the UEFA Champions League. Ukraine won 2-0 versus Germany in the final to win the European Deaf Football Championships in Greece on June 2-15, winning the 16-team tournament for the first time. Ukraine’s U-20 men’s soccer team scored a 3-1 come-from-behind victory over South Korea on June 15 at Lodz Stadium during the FIFA U-20 World Cup final in Poland. Two goals by Vladyslav Supriaha (34th + 52nd minutes) and an incredible run by Heorhiy Tsitaishvlii from his own side of midfield to the penalty area capped by a shot into the corner of the net (89th minute) accounted for Ukraine’s scoring. Ukraine’s goalkeeper Andriy Lunin, awarded the Golden Glove award of the tournament, kept the opposition to only one goal. This was the first time Ukraine ever progressed past the Round of 16 in this World Cup. Serhii Buletsa earned the Adidas Silver Ball award, and Danylo Sikan received the Silver Boot award. Dynamo Kyiv defeated Shakhtar Donetsk to win the Ukrainian Super Cup, 2-1, on July 28 in Odesa. Shakhtar was led by new coach Luis Castro. The Ukrainian Premier League will be expanding from 12 teams in 2019-2020 to 16 teams for the 2021-2022 season. Ukraine’s 2-1 defeat of Portugal on October 14 in Kyiv clinched a spot at Euro 2020 with a first-place overall finish in Group B. Goals by Roman Yaremchuk and Andriy Yarmolenko proved enough to offset Christiano Ronaldo’s 700th career goal. Andriy Shevchenko, Ukrainian soccer legend, was rated as No. 19 on the list of the 100 top players of the 21st century by the British publication The Independent. Yevhen Konoplyanka signed a three-year contract with Shakhtar Donetsk after playing for Germany’s Schalke 04 since 2016. Dynamo Kyiv’s new head coach is Oleksiy Mykhaylychenko, replacing Alyaksandr Khatsevich. Ukraine’s Parliament voted for a provisional commission to investigate Andriy Pavelko’s alleged corrupt dealings with construction of football pitches with artificial turf in Ukraine in 2017-2018. Pavelko is president of the Football Federation of Ukraine.

The TENNIS world saw Dayana Yastremska win the WTA Thailand Open on February 3, showcasing her disciplined and focused play. She defeated Ajla Tomljanvic 6-2, 2-6, 7-6 (3) in a tightly contested final. Yastremska won the Strasbourg International in France on May 25, her third title in eight months. The final match took 2 hours, 58 minutes to play. Seventeen-year-old Daria Snigur won the Wimbledon junior girls’ title in England on July 13, defeating American Alexa Noel 6-4, 6-4; it was a rematch from a week prior when Snigur bested Noel in the final of a tournament in Roehampton, England 6-1, 6-2. This was Snigur’s first major title and fourth overall singles title. She was the second Ukrainian junior champion at Wimbledon after Kateryna Bondarenko in 2004. Ukrainian player Helen Ploskina was fined $20,000 and given a lifetime ban after being found guilty of match-fixing. In a rare all-Ukrainian U.S. Open match-up, Elina Svitolina bested Yastremska 6-2, 6-0 on August 30. The number of emerging young Ukrainian women tennis stars is amazing when considering the political and economic upheaval in our homeland. The Bondarenko sisters, Kateryna and Alyona, and Yuliana Fedak yielded to Elina Svitolina, Lesia Tsurenko and Kateryna Kozlova, who welcomed Anhelina Kalinina, Katarina Zavatska and Dayana Yastremska only soon to be joined by Marta Kostyuk, Daria Snigur and Daria Lopatetska. Player development has evolved with the times, progressing from affluent businessmen providing funding to a government sponsored growing Ukrainian Tennis Federation, all based upon Ukraine’s strong tennis tradition originating from family dynasties. Fed Cup competition and improved infrastructure have paved the way recently with the ultimate goal being a national tennis center to nurture and maintain Ukrainian tennis talent.