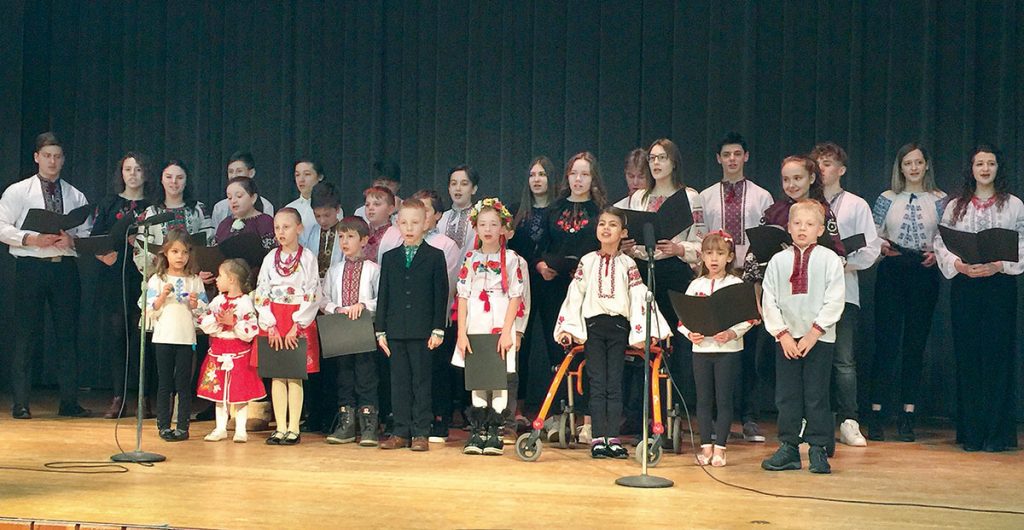 EDMONTON Alberta – The Board of Directors of the Ukrainian Youth Unity Complex in Edmonton, known as the “Domivka,” hosted their 47th annual “Shchedryi Vechir” dinner on January 18. About 300 community members braved bitterly cold temperatures and icy roads to enjoy a traditional community gathering that is one of the final feasts of the Ukrainian Christmas cycle. A true family event, Shchedryi Vechir unites young and old, children and grandparents, Canadian-born and recent immigrants to share a traditional meatless meal.

The evening’s program was opened by Vasyl Yavorsky and Ivanka Soletsky of the Edmonton branch of the Ukrainian Youth Association. The ceremonial “didukh” was presented by Ihor Krys on behalf of the board, who welcomed every one and very briefly highlighted the significance of the evening’s event.

Bishop David Motiuk, Ukrainian Catholic eparch of Edmonton and the newly appointed apostolic administrator of New Westminster, British Columbia, along with the Rev. Danylo Kuc, pastor of St. George Ukrainian Catholic Parish, led the opening prayer. Joining the prayer was the Verkhovyna Choir of the Ukrainian Youth Association under the baton of Orest Soltykevych.

Young members of the Edmonton branch of the Ukrainian Youth Association performed Ukrainian carols, accompanied by Ivan Soletsky on the accordion. Their joyful performance brought smiles to all.

Bishop David delivered a short but meaningful pastoral message in which he highlighted the divine gifts bestowed as part of the Feast of Epiphany. The singing of carols led by the Verkhovyna Choir followed.

Special guests for the evening included Consul General of Ukraine Oleksandr Danyleyko, who attended with his family. In his remarks, Mr. Danyleyko noted that when he and his family arrived in Edmonton about one year ago, Shchedryi Vechir was the very first official event they attended. Any apprehensions they may have had about moving to Edmonton, known for its bitterly cold winters, have been completely erased by the warm and welcoming community that has embraced them. He noted that the community comes together, and he and his own family appreciate feeling a part of this kind and warm family.

Kerry Diotte, member of Parliament for the riding of Edmonton-Griesbach, and his wife once again made time to attend Shchedryi Vechir. A frequent guest at the Domivka and at other events in Edmonton’s Ukrainian community, Mr. Diotte reminisced about how his own nomination meeting was held at that venue several years ago. Mr. Diotte said he is proud to have participated in the election observer mission during the last presidential election in Ukraine and noted that he did not observe or experience any problems with the voting process. He added that he was particularly impressed with the beauty of Ukraine and the warmth of the people, and that he looks forward to participating in future election observer missions to Ukraine.

A surprise guest, vocalist Ihor Bohdan, merited artist of Ukraine, performed two Ukrainian carols. In his inimitable style, he engaged all present to join him in singing. He concluded with heartfelt wishes and beautiful “vinshuvannia” (best wishes) and invited all to attend his upcoming farewell tour concert.

The evening’s program wound down with a few more carols sung by all present under the guidance of Mr. Soltykevych and vinshuvannia by Mr. Yavorsky. Bishop David led the closing prayer.

Lidia M. Wasylyn is a member of the League of Ukrainian Canadian Women, Edmonton branch.