Commemoration of Ukrainian Unity Day focuses on security and independence 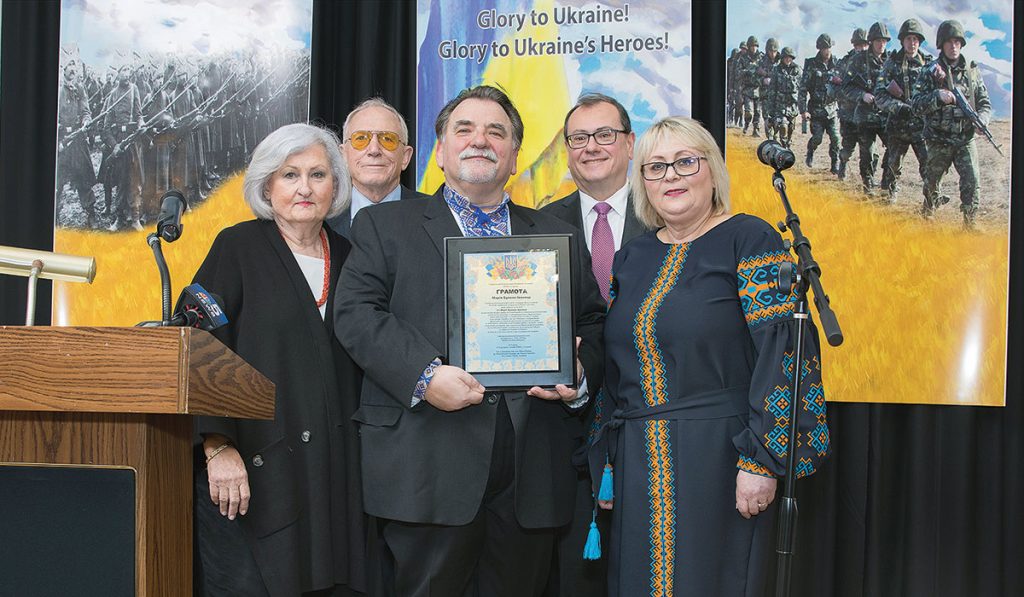 CHICAGO – The annual commemoration of “Unity Day,” marking Ukraine’s independence of January 22, 1918, and the unification of eastern and western Ukraine of January 22, 1919, was held at the Ukrainian Cultural Center of Ss. Volodymyr and Olha in Chicago on January 26. The event was organized by the Ukrainian Congress Committee of America–Illinois Division with a themed focus on “Security and Independence.”

The guests of honor were Lt. Gen. My­khailo Zabrodskyi, commander of Ukrainian Airmobile Forces, and Dr. Philip Karber, president of the Potomac Founda­tion. Also in attendance were Democratic Congressmen from Illinois Danny K. Davis, Michael B. Quigley (co-chair of the Cong­ress­ional Ukraine Caucus), Raja Krishna­moorthi and Sean Casten; Cook County Treasurer Maria Pappas; Commiss­ioner Dan Patlak of the Cook County Board of Review; and representatives of the Azerbai­jani, Hungarian, Lithuanian and Polish communities.

The commemoration began with the posting of colors by Ukrainian American Veterans Post 32, led by Commander Peter Bencak, and the singing of the American and Ukrainian national anthems by the choir of the American Ukrainian Youth Association–Mykola Pavlushkov Branch in Chicago, conducted by Volodymyr Popo­vych. The Armed Forces Medley (Salute) was performed to honor all who served.

Ihor Diaczun, president of the UCCA-Illinois, offered remarks on the theme of this year’s observance. He stated: “…security for Ukraine is the ability to protect itself from military threat and to overcome the multidimensional threats from Russia …independence for Ukraine is to be a resilient and self-sufficient nation with freedom from control or influence of others.”

Following these comments, attendees responded in unison by holding up “We Care About Ukraine” signs.

Bishop Venedykt Aleksiychuk of the Ukrainian Catholic Eparchy of St. Nicholas led the attendees in prayer and remarked that “…there is strength in unity…[which]must prevail in Ukraine in order for security and independence to be enjoyed by the Ukrainian nation.”

Ms. Buchwac-Iwanec, who received an award from the Ministry of Defense of Ukraine for her efforts in aiding the Donbas war effort, was recognized for her charitable work with assistance to Ukrainian orphanages and the elderly in Ukraine, as well as soliciting and organizing assistance to help the volunteer battalions that defended Ukraine during the Crimean invasion.

Mr. Wasiunec was recognized for more than 40 years of active participation, service and support of the American Ukrainian Youth Association – 19 of these years for serving as president of the AUYA Dmytro Vitovsky Branch in Palatine, Illinois.

The messages delivered by Congress­men Davis, Quigley, Krishna­moorthi and Casten reinforced their commitment to impart upon the administration and their colleagues in Congress the need for continued military assistance to Ukraine, so that Ukraine may defend itself from further Russian aggression. They stressed “that Ukraine must have the ability to secure its territory and to continue building a sovereign democratic state.” They emphasized that the threat from Russia is not only a concern for Ukrainian security and independence; it also poses a threat to Western security. All four Congressmen assured commitment for support of Ukraine with democratization efforts, market-oriented reforms and dissemination of information to their colleagues in Congress.

Consul General Larysa Gerasko is returning to Kyiv after serving a five-year term at the Consulate General of Ukraine in Chi­cago. Motria Melnyk, president of the Ukrainian Institute of Modern Art in Chicago and a UCCA-Illinois board member, elaborated on the accomplishments of Consul General Gerasko during her term in Chicago and presented an etched sculpture as a remembrance of gratitude from the UCCA-Illinois and the Ukrainian community.

Pavlo Bandriwsky, vice-president of UCCA-Illinois, introduced Dr. Karber (U.S. Marine Corps, ret.), who over the past six years as president of the Potomac Found­ation, a non-partisan, non-profit research organization focused on international security issues, has made 32 visits to Ukraine and spent 180 days in the combat zone of eastern Ukraine. An internationally recognized authority on defense and national security matters, he has testified before the U.S. Congress and the British Parliament on the need to support Ukraine. In 2014, Dr. Karber was invited by the interim government of Ukraine to assess the country’s deteriorating security situation. He was joined in this effort by the Potomac Foundation’s senior fellow, Gen. (ret) Wesley Clark, former NATO supreme allied commander Europe and 2004 Democratic presidential candidate.

Dr. Karber and Gen. Clark prepared reports to the U.S. Congress in support of U.S. military assistance for Ukraine, and they were the first to make the case for lethal aid – including Javelins, counter-battery radar, drones and advanced jam-proof communications – all of which were subsequently delivered to the Ukrainian Armed Forces. Dr. Karber lectured on Ukraine to American and European Military Com­mands and his report on “Lessons Learned from the Russo-Ukraine War” was commissioned by Gen. H.R. McMaster, who became national security advisor to the President. Dr. Karber and Gen. Clark were the first recipients of the UCCA Friends of Ukraine Award in 2017.

Dr. Karber’s presentation focused on strategic issues facing Ukraine at this critical juncture in history. Based on recent research by the Potomac Foundation, he provided data in charts and maps which demonstrated that the country is at a critical crossroads and its future involves recognizing and addressing three challenges:

The Russian threat is not just against Ukraine but is aimed at the United States and Europe.

The Ukrainian Army has been “refor­med” and the issue now is its modernization for sustained long-term competition with Russia as a hostile neighbor.

The U.S. and its European allies need Ukraine’s military contribution to Western security as much as Ukraine needs to be included in the West’s security alliance.

Dr. Karber noted that “as a strategic ally that could compliment U.S. defense needs, Ukraine’s military contribution would reduce the currently unfulfilled need for more American troops on the ground in Europe, provide a center of gravity to offset Russian dominance of the Black Sea, give Western air defenses a major improvement in early warning and contribute a significant deterrent to further Russian aggression against NATO.”

Dr. Karber concluded that “at a time of divisive partisan politics, the Ukrainian diaspora can play a critical role in making the case for Ukraine as a strategic ally and carrying that message to the American people.”

Maj. Bencak (U.S. Army, ret.), Chicago commander of UAV Post 32, introduced Lt. Gen. Zabrodskyi. In 2014, during the war in the Donbas, Lt. Gen. Zabrodskyi commanded the 95th Ukrainian Air Assault Forces on a combat mission, passing 470 kilometers from Sloviansk to Mariupol, then along the Russian-Ukrainian border and through Luhansk, 170 kilometers into Russian- and separatist-held territory to recover a significant area of that territory, and back to Sloviansk. According to Dr. Karber, this was the longest raid of armed formation in contemporary military history. In 2017, Lt. Gen. Zabrodskyi was appointed commander of the Anti-Terrorist Forces (ATO). In 2019, he was elected to the Verkhovna Rada on the party list of Petro Poroshenko’s European Solidarity Party.

Lt. Gen. Zabrodskyi offered a comprehensive overview of the Ukrainian military. “After the collapse of the Soviet Union, Ukraine had one of the largest armies in Europe and the third largest nuclear arsenal, after the United States and Russia. Ukraine was in an economic crisis and could not support a large military. Since armed conflict with Russia did not seem possible, Ukraine proceeded on the first reform effort in the 1990s, that resulted in the reduction of military personnel and military structures, and the significant reduction of nuclear weapons.”

He explained:  “the lack of funding to support and maintain the military left the Ukrainian defense forces in an abysmal state of existence. It was evident that there was a need for an Army capable of defending Ukrainian sovereignty and territorial integrity in the Donbas. New reforms began in 2014 to re-organize the military and train future officers. These reforms followed a more systemic approach and took place in the context of armed conflict, utilizing NATO standards and instructors in cooperation with Western partners. In 2015, the military budget was increased and this increased the number of military personnel and their combat-readiness. In 2017, the Army abandoned the draft and established a contract service model, which produced a professional military.”

“In the event of new hostilities in the Donbas, the Ukrainian Army will be more effective because of the combination of its own combat experience and the technologies and experience of the military from NATO countries,” he said.

Mr. Bencak gifted a coin from the Ukrainian American Veterans with their logo on the front and the UAV National Monument on the reverse in a presentation box with the lieutenant general’s name engraved on the plate. Mr. Diaczun presented Lt. Gen. Zabrodskyi and Dr. Karber the White House Historical Association 2019 Sikorsky Christmas Ornament. The ornament honors the legacy of Kyiv-born Ihor Sikorsky, whose helicopters were manufactured for civilian and military use.

To conclude the event, a video prepared by Maria Dziuma was streamed; it depicted the accomplishments of Lt. Gen. Zabrodskyi with background sounds of the anthem of the Organization of Ukrainian Nationalists (OUN).