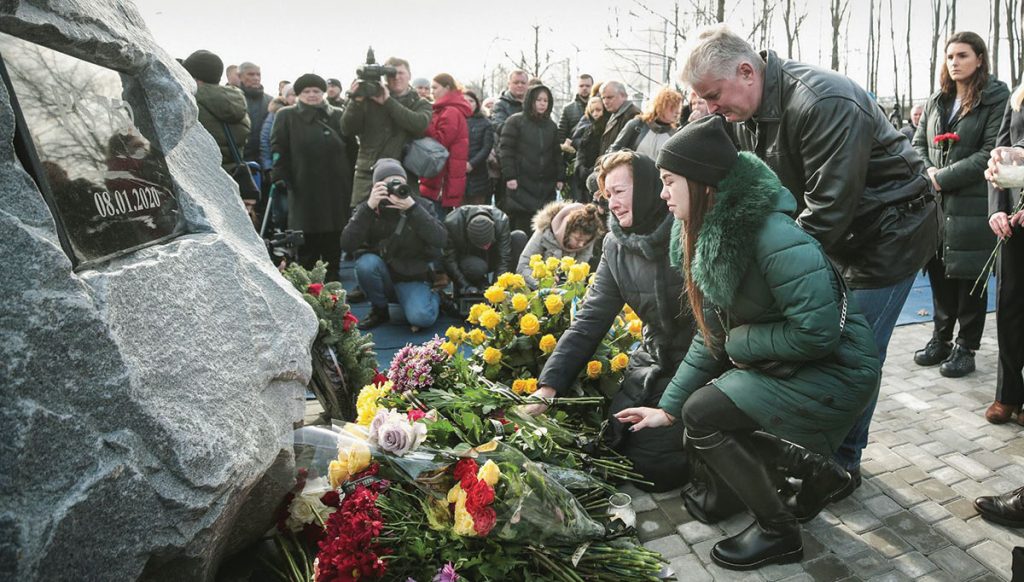 Serhii Nuzhnenko/RadioSvoboda.org
Mourners lay flowers at the new memorial at Kyiv Boryspil International Airport to the victims of the downing of Ukraine International Airlines Flight 752.

KYIV – Ukrainian officials opened a memorial at Kyiv Boryspil International Airport on February 17, marking the traditional 40th day of mourning after the tragedy of Ukraine International Airlines Flight 752 (PS752). The monument commemorates the 176 victims of the Ukrainian passenger jet that was shot down by Iran’s Islamic Revolutionary Guard Corps in Tehran on January 8.

The five-country investigation – involving Canada, Ukraine, Sweden, Afghanistan and the United Kingdom – of the shootdown is still in progress, with some difficulty regarding cooperation by Iran.

A stone with the inscription “PS752, 08.01.2020” was unveiled at Boryspil airport. Relatives of the victims, Ukraine’s Minister of Foreign Affairs Vadym Prystaiko, Secretary of the National Security and Defense Council of Ukraine Oleksiy Danilov and UIA President Yevhen Dyhne attended the ceremony. Represent­atives of Afghanistan, Britain, Canada, Germany, Iran and Sweden, which lost citizens in the downing, were also present.

“I want to bow my head in mourning for all those lost in this flight,” Minister Prystaiko said at the ceremony. “It should have never happened; it should not have occurred in a world where the law exists. We are actively working to restore justice and hold those responsible accountable. We will demand fair compensation for this tragedy. Our goal now is to get full access to the airplane’s black boxes. We have working contacts with interested partners who have relevant experience in investigating such crashes.”

While addressing the media, Mr. Prystaiko stressed that the investigation into the crash is still under way, and Ukraine is demanding all the truth about the PS752 crash.

One month before the memorial ceremony, on January 18, the head of the incident investigation department of the Organization of Civil Aviation of Iran, Hassan Rezaiefar, had said that the black boxes from the UIA airliner would be sent to Ukraine. According to the Iranian agency Tasnim, he also said that he had repeatedly met with the Ukraine’s panel of experts. Mr. Rezaiefar also noted that the information from the black boxes was not read in Iran and said the flight recorders would be analyzed in Kyiv, using the experience of France, Canada and the United States.

But the next day, Mr. Rezaiefar, in a comment to the Iranian news agency IRNA said that Iranian experts were trying to decipher the black boxes of the Ukrainian plane in Iran and had not made the decision to transfer them to other countries. Earlier, he had said that since the plane was a modern Boeing 737 and Iran has no technology to decipher its black boxes, they could be sent to France.

At present, the flight recorders are still in Iran.

Meanwhile, Iran offered families of the victims compensation of $80,000 per person. Foreign Affairs Minister Prystaiko said that Ukraine rejected this proposal because the compensation should be much higher. He pointed out that $80,000 is a standard compensation in Iranian legislation and said negotiations are continuing.

“What Ukraine will agree on will be paid to citizens of all countries, including Iran. This was our fundamental position, and we reached it,” said Mr. Prystaiko “I understand that nothing can pay for the lives of your relatives. The only thing we can do is demand fair compensation. I met with the foreign minister of Iran yesterday; during this meeting, we demanded a fair and honest investigation. We will not agree to identify some soldier who pushed the button. We demand to know the full truth of what happened to our flight, of what led to the death of our people.”

The most recent multilateral meeting on the topic of PS752 was held in Germany during the Munich Security Conference on February 15, according to Ukraine’s Ministry of Foreign Affairs. Ukraine, Canada, Sweden, Afghanistan and the United Kingdom, as participants of the International Coordination and Response Group for the Victims of PS752, held their second meeting to ensure progress in implementing their framework conditions for cooperation with Iran. These framework conditions were elaborated on January 16 in London during a first session of the group’s participants.

Ministers of the International Coordin­ation and Response Group planned to deliver a letter to Iranian Foreign Affairs Minister Mohammad Javad Zarif to reiterate the need to ensure the completion of the investigation, transparency and justice for the victims’ families.

In a conversation with Minister Zarif, the group’s ministers insisted that Iran must continue to take all steps necessary to address the many vital issues related to the airliner’s downing, including causes and liability. Ministers also demanded timely and equitable compensation commensurate with previous similar tragic cases. Finally, the ministers called on Iran to complete a thorough and transparent criminal investigation into the shootdown of PS752.

While Minister Prystaiko worked on the issue in Munich, on February 17, the secretary of Ukraine’s National Security and Defense Council, Mr. Danilov, visited Tehran and met with the secretary of the High National Security Council of Iran, Ali Shamhani. According to the council’s press service, Mr. Danilov stated that the Ukrainian side insists on the necessity of a top-priority study of the plane’s onboard flight recorders.

“Danilov particularly emphasized the urgent need to research the black boxes, saying that Ukraine has all the technical and scientific capabilities. The parties agreed to avoid the politicization of the issue of technical investigation as much as possible and agreed on the need to intensify the interaction of experts and specialists,” the statement said.

Mr. Danilov further stressed that a critical goal for Ukraine is to comprehensively and thoroughly investigate all the circumstances of the catastrophe and ensure compliance with international law.

In the meantime, Canadian lawyers, who previously successfully sued Iran, are seeking class-action status in a lawsuit on behalf of the victims aboard the flight, looking for at least $1.1 billion in compensation, according to Reuters. The lead plaintiff in the case is anonymous, referred to in legal documents as “John Doe” and described as immediate family of a victim called “Jack Doe.”

The filing says John Doe’s identity must be protected because of the risk that “his Iranian family would be put at risk of harm or death by the Iranian regime.” The suit alleges that the downing of the plane was “an intentional and deliberate act of terrorism.”

In the last news from Iran, as reported by the IRNA news service, the country’s defense minister, Amir Khatami, said on February 19 that a black box from the Ukrainian airliner had suffered severe damage. “The black box has been severely damaged, and the Defense Ministry has asked defense companies to restore it. The black box will be restored first and then decrypted,” the minister said. According to Mr. Khatami, work is under way to restore the box.

The Ukrainian commercial airliner crashed on January 8 soon after taking off from Iran’s capital, Tehran. The crash of UIA Flight 752 came just hours after Iran launched a ballistic-missile attack targeting two bases in Iraq that house U.S. forces in retaliation for the killing of Iranian Revolutionary Guard Corps commander Qasem Soleimani. The three-year-old aircraft was en route to Kyiv. Ukrainian authorities said the victims included 82 Iranians, 63 Canadians, 11 Ukrainians (including all nine crew), 10 Swedes, four Afghans, three Britons and three Germans. Iran at first denied responsibility for the shootdown, but later confirmed that two of its missiles were fired “unintentionally” at the Ukrainian plane.