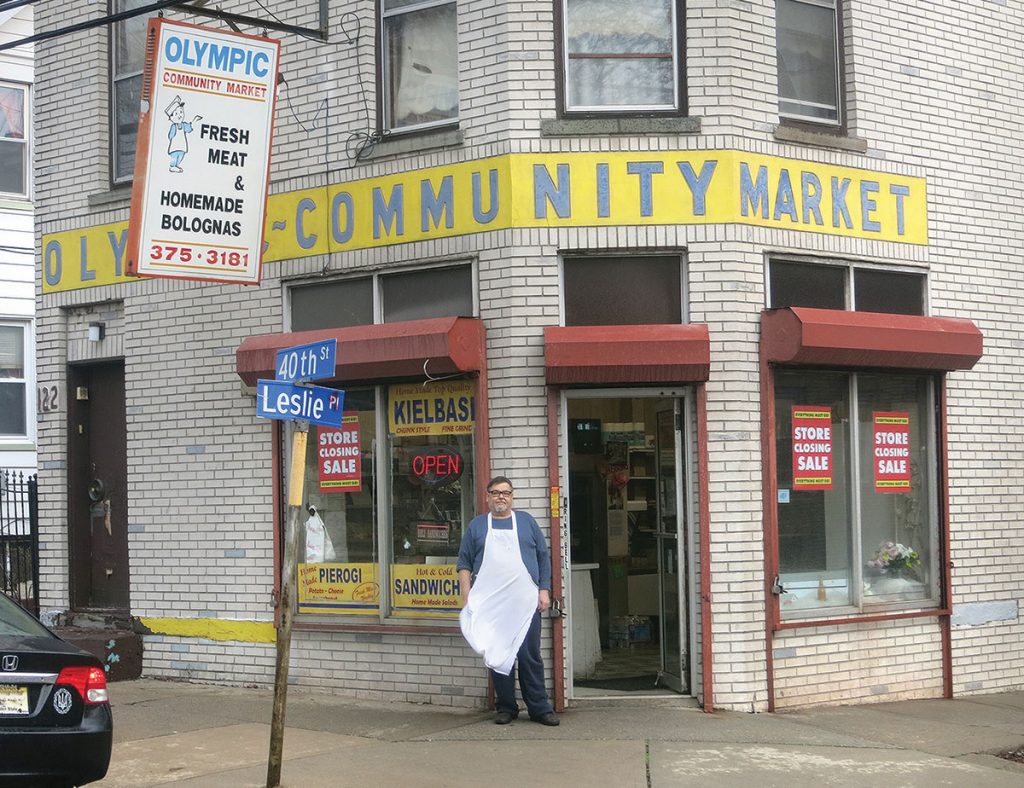 Matthew Dubas
Oleh Lazirko poses in front of Olympic Community Market, as his father had in front of B&L Meat Market.

IRVINGTON, N.J. – Among the sparsely stocked grocery shelves, the writing was on the wall – “You’ve had the rest, now try the best!” – as an end of an era was drawing nearer. On February 15 Olympic Community Market on 40th Street (on the corner of Leslie Place) closed its doors for good. An institution founded in 1952, known then as Bundziak and Lazirko Meat Market and located at 615 Springfield Ave. in Newark, Olympic Market, or simply “Lazirko’s,” the business has been run for two generations by the Lazirko family. Son Oleh Lazirko says it is a bittersweet moment leading to his retirement.

This writer was standing in line on Friday afternoon, February 7, as many of the regular customers were ordering lunch sandwiches, while others placed their last orders of homemade meat products – the familiar Ukrainian classics, including kovbasa, kabanos, liverwurst (“pashte­tivka”) and kyshka, as well as modern spins on deli favorites such as chorizo, Ukrainian pepperoni and garlic salami.

Victor Kurywczak, a Ukrainian American originally from Elizabeth, N.J., and now a resident of State College, Pa., said he heard about the market closing from his relatives and made the trek from over 100 miles away. Mr. Kurywczak explained that he’s been coming to the market since childhood, and recalled many memories of the place, the smell of smoked meats, and how you knew it was quality you can’t find everywhere even today.

“I wish the Lazirko family, especially Oleh, best of luck and thank you for making memories of keeping Ukrainian tradition through our food. Mnohaya lita,” he added.

He explained that he has ordered meats shipped from Olympic Community Market to his cousin in Kentucky, and had a shopping list from his mother, as well as items for his other relatives in New Jersey.

Ezekiel Simmons, a regular customer who lives around the corner on Chancellor Avenue and a family friend of the Lazirkos, shared his sadness about the market closing, “You’ll never be able to get it again. That’s the sad part.” Mr. Simmons said he has shared his love for the market with his co-workers and said the local regulars will miss this place when it finally closes.

A lot of people are stocking up for the upcoming Easter holidays, Mr. Lazirko said.

The market moved from its original location in Newark in 1963, as if sensing that racial tensions of the day were coming to a head. And they did come to a head in 1968 with the Newark riots that destroyed many properties near the market’s latest location in Irvington. Olympic Park was where the riots finally subsided, but the damage was done.

Olympic Market survived the riots, but it could not survive the Ukrainian community moving out of the urban centers it formerly called home.

Mr. Lazirko noted that he had worked for 42 years at the market, alongside his father, Antin, who died in 1978, and his mother, Natalia, who died in 2017 at the age of 96, having worked at the market for 54 years. A tribute to her and her life history was prominently displayed near the front register, where she would tally up customers’ orders.

He stated: “In the years that I’ve worked here, we’ve had some of the best customers, like family, not just coming to buy food. It has been a great relationship with these customers for 68 years. More recently, regular customers call in their orders to be shipped all over the country. Some in North Port, Fla., have been known to place orders to be shipped the same day, regardless of the cost. And we never add to the shipping, whatever it costs is what the customer pays. As I see it, we can’t compete against Amazon and other large businesses that are muscling us out with their buying power. In addition, the diaspora community has scattered from its former centers.”

Mr. Lazirko really showed his love for his craft, as customers waited patiently for the latest batch of kabanos to come out of the smoker and the business was catching up with the last rush of orders before it closes its doors. He even explained to customers how the freezing process of smoked meats (the cell structure is destroyed as the water expands in the meat) needed to be counteracted to “revive” the meat by warming it up, even in the microwave.

Olympic Community Market was located at 122 40th Street, Irvington, N.J. 07111, at the corner of Leslie Place. It continues to get messages on its Facebook page from customers wishing the business and family well, and sharing fond memories of the place.