Pompeo visits Kyiv in the middle of Trump impeachment inquiry 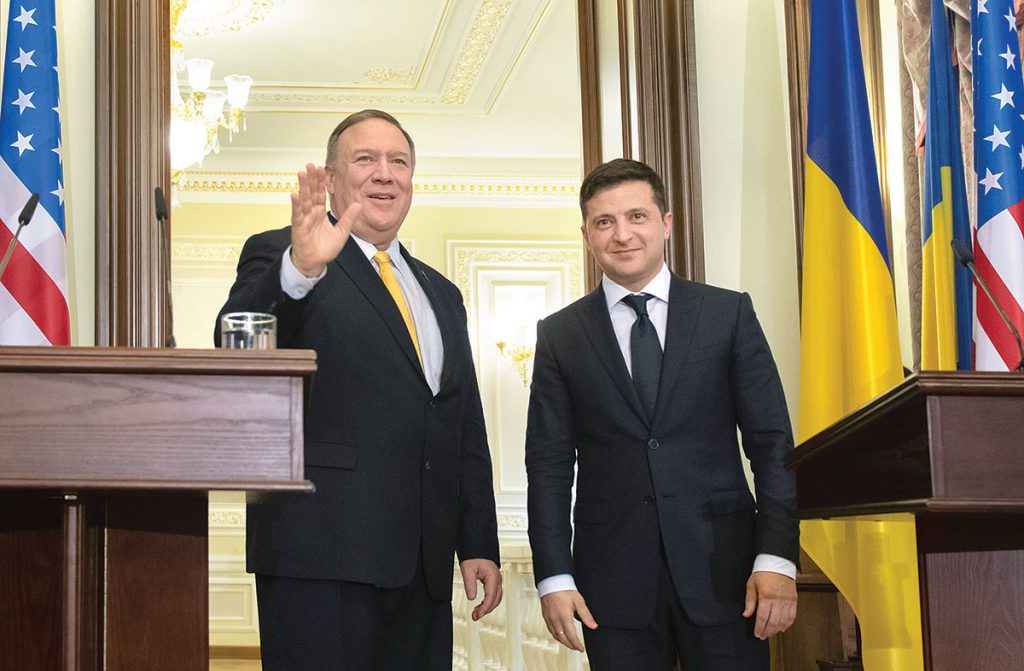 Presidential Office of Ukraine
U.S. Secretary of State Mike Pompeo and Ukrainian President Volodymyr Zelenskyy during their joint briefing in Kyiv on January 31.

During his visit, Mr. Pompeo met with President Volodymyr Zelenskyy, Foreign Affairs Minister Vadym Prystaiko and Defense Minister Andriy Zahorodnyuk to “underscore the United States’ strong support for Ukraine and the country’s Euro-Atlantic integration,” according to the Department of State. The secretary of state also met with Metropolitan Epifaniy of the Orthodox Church of Ukraine, civil society activists and business leaders, and participated in a wreath-laying ceremony to honor those who have fallen in the Russian-Ukrainian war in the Donbas region while defending their homeland.

“Ukrainians continue to fight this battle as they work to build a modern, democratic, Western state. They know that a free and well-governed nation is a hard-won victory, but it’s worth it. The United States supports those efforts and honors the achievements that you have made thus far,” Mr. Pompeo had said at the beginning of his service as secretary of state in 2018. Now, on his first visit to Ukraine, he was challenged to prove his earlier opinions on the country.

The background to the secretary of state’s visit included both the impeachment inquiry and the controversy that erupted after Mr. Pompeo attacked NPR anchor Mary Louise Kelly. “He asked me, ‘Do you think Americans care about Ukraine?’ ” Ms. Kelly reported. “He used the f-word in that sentence and many others. He asked if I could find Ukraine on a map. I said, yes; he called out for his aides to bring him a map of the world with no writing, no countries marked. I pointed to Ukraine; he put the map away.” Mr. Pompeo apparently did not want to be asked about Ukraine just a week before his visit to Kyiv, and he accused the journalist of lying. In speaking with reporters, Mr. Pompeo later said, “Of course, the American people care about the people of Ukraine.”

Mr. Pompeo started his day in Kyiv at a meeting with Ukrainian Foreign Minister Prystaiko. “Secretary Pompeo and Foreign Minister Prystaiko discussed the next steps to advance diplomatic efforts to end the Russia-instigated conflict in eastern Ukraine. The secretary reaffirmed the United States will continue to work with allies and partners to press Russia to implement its security commitments under the Minsk agreements,” the State Department’s spokesperson Morgan Ortagus relayed. “Secretary Pompeo and Foreign Minister Prystaiko discussed Ukraine’s progress on reforms critical to its Euro-Atlantic integration. The secretary underscored unwavering U.S. support for Ukraine’s sovereignty and territorial integrity,” she summed up. The U.S. side also emphasized the importance of maintaining dynamic and effective reforms in Ukraine.

Minister Prystaiko expressed his sincere gratitude to the Trump administration and Congress for systematic support and extension of practical assistance to Ukraine. He underlined that Ukraine is a partner of the United States in maintaining international security and is interested in attracting strategic U.S. investments in the military, technical, energy and other fields.

The next meeting on the secretary of state’s tight schedule was with the head of the Orthodox Church of Ukraine. It is interesting to note that one of the White House’s key officials has met with Metropolitan Epifaniy more often than with Ukraine’s president. Four months ago, Mr. Pompeo met with Metropolitan Epifaniy in Washington. Secretary Pompeo then tweeted that he was “Impressed by his [Epiphany’s] efforts to ensure the independent Orthodox Church of Ukraine is open to all believers. The U.S. will always champion the right of all people to worship freely.” Mr. Pompeo also congratulated the metropolitan on receiving the Athenagoras Human Rights Award.

In Kyiv, the secretary of state added: “I am very pleased that the Greek and Alexandrian Churches have recognized the Ukrainian Orthodox Church as autocephalous. Russia should never interfere with the protection of the fundamental rights of Ukrainians.”

Metropolitan Epifaniy wrote on Twitter: “We discussed the challenges faced by the Orthodox Church of Ukraine,” adding, “Among them is the shameful situation with freedom of religion in the occupied Donbas and the temporary annexed Crimea. I hope that Washington will continue to remain firm in its support of Ukraine’s sovereignty.”

The highlight of Secretary Pompeo’s visit was his meeting with President Zelenskyy. “I would like to thank the United States of America, President Trump’s administration, you personally and the entire people of the United States for the continuous support of Ukraine, our sovereignty and territorial integrity. It is very important for us,” the president said.

Mr. Zelenskyy also thanked the United States for helping Ukraine investigate the downing of the Ukraine International Airlines aircraft in Iran, and he underscored Ukraine’s interest in active cooperation with the United States in various spheres. Messrs. Zelenskyy and Pompeo discussed the development of infrastructure in Ukraine, and the Donbas in particular, according to the Presidential Office of the President. “We have great plans concerning the roads. Our first step is 25,000 kilometers of roads. We invite American businessmen to invest in Ukrainian infrastructure,” Mr. Zelenskyy said.

Messrs. Zelenskyy and Pompeo also discussed the progress of reforms in Ukraine and trade relations between the two countries. The secretary of state expressed support for Ukraine’s cooperation with the International Monetary Fund.

As the United States is one of Ukraine’s main partners in the realm of security, while in Kyiv Secretary of State Pompeo also met with Ukrainian Defense Minister Andriy Zahorodnyuk. “Secretary Pompeo and Defense Minister Zahorodnyuk discussed U.S. support for Ukraine’s efforts to strengthen its resilience against Russia’s aggression and to implement important defense sector reforms. The secretary reiterated that U.S. support for Ukraine’s sovereignty and territorial integrity is unwavering,” the State Department spokesperson reported.

On January 31, Ukraine’s leaders also spoke with Mr. Pompeo about several other important matters including 25 percent taxes on steel products introduced by the Trump administration, the appointment of a U.S. ambassador to Ukraine, as well as a State Department special representative for Ukraine to replace Kurt Volker, who had resigned.

During his day in Kyiv, Mr. Pompeo had no significant new announcements. Still, his public remarks following his meeting with President Zelenskyy underlined that his official position remains the same place as it was at the beginning of his White House service – a very positive signal for Ukraine.

“The United States sees that the Ukrainian struggle for freedom, democracy and prosperity is a valiant one. Our commitment to support it will not waver… We have maintained support for Ukraine’s efforts to join NATO and move closer to the European Union,” Secretary of State Pompeo said during a joint press conference with President Zelenskyy.

“In July of 2018, we released the Crimea Declaration, which clearly stated that Crimea is part of Ukraine and the United States will never recognize Russia’s attempts to annex it. We will never accept anything less than the full restoration of Ukraine’s control over its sovereign territory,” Secretary Pompeo underlined, giving Ukraine reasons for optimism.