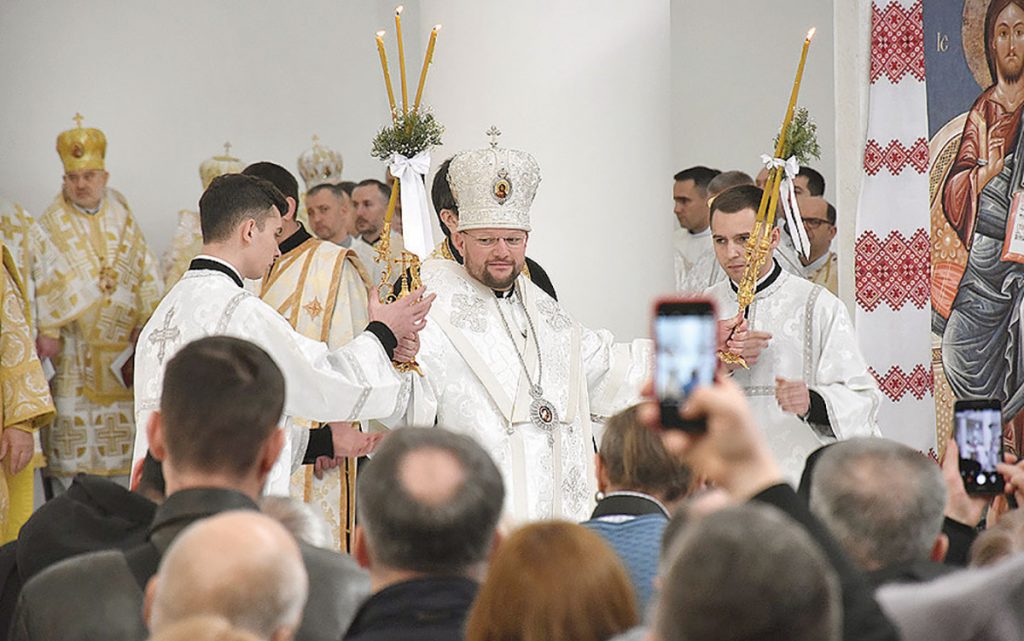 Staff | The Ukrainian Weekly | Subscription
Newly consecrated Bishop Stepan Sus during the liturgy in Kyiv’s Cathedral of the Resurrection of Christ on January 12.

KYIV – The world’s youngest Catholic bishop was consecrated in Ukraine.

Father Stepan Sus, 38, was consecrated a bishop in Kyiv’s Cathedral of the Resurrection of Christ on January 12.

The Synod of Bishops of the Ukrainian Greek-Catholic Church canonically elected Father Sus to be a curial bishop of the Major Archeparchy of Kyiv-Halych. Pope Francis confirmed his selection on November 15, 2019.

The new bishop said he found out about his appointment two days after running a 10K in the Marines Marathon in Washington with wounded Ukrainian veterans.

“When our muscles were still sore, I found out that I had a new marathon in the life of the Church,” Bishop Stepan said after his episcopal consecration, according to the Lviv Portal.

After his priestly ordination for the Ukrainian Archeparchy of Lviv in 2006, Father Sus served as a military chaplain. From 2012 to 2019, he was parish priest of the Garrison Church of Ss. Peter and Paul and served as an advisor to the Lviv Archeparchy.

While young for a bishop, Bishop Stepan is not unexposed to human suffering, having conducted at least 76 funerals for Ukrainians killed in the Donbas region since 2014 amid a war with pro-Russian separatists.

Bishop Stepan said that, when accepting his position, he thought of the martyrs in the Ukrainian Greek-Catholic Church “who became priests and bishops at a time when there were no solemn liturgies” and ended their lives exiled in labor camps. He said that he prayed for the martyrs’ intercession to make him worthy of the ministry of a bishop in the Ukrainian Greek-Catholic Church.

“Last year, we commemorated the 30th anniversary of … the complete escape from the underground of our Church. Many of you were part of that remnant of Israel, the Ukrainian underground Church, which God preserved in the face of severe persecution. Because of that small bunch of people, because of that remnant, the whole Church has been resurrected,” Patriarch Sviatoslav said in his homily at the divine liturgy.

“The ancient roots of the Church of Kyiv here, on the shores of the gray Dnipro, produce a new sprout. We have been killed and crucified many times, but our roots are alive,” he said.

Bishop Stepan said he does not know what the future will bring, but has placed it in the hands of God, who has called him to this ministry.

“No matter how scary the word ‘curia’ might be, I know that with God all difficulties can be overcome,” the newly consecrated bishop said.