Yermak replaces Bohdan as the head of Presidential Office 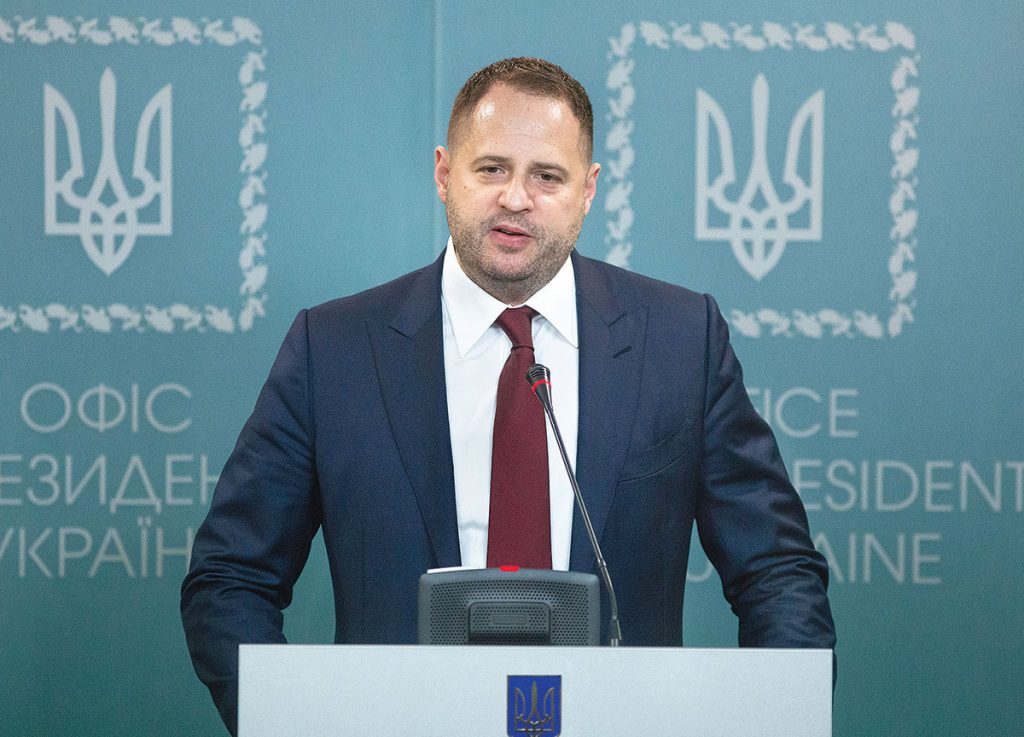 KYIV – President Volodymyr Zelenskyy dismissed the head of the Presidential Office of Ukraine, Andriy Bohdan, and appointed presidential aide Andriy Yermak in his place on February 11.

Mr. Bohdan served as chief of staff and Mr. Yermak worked as an aide to President Zelenskyy beginning on May 21, 2019. On February 10, according to Presidential Office insiders quoted by the news media, the president and Mr. Bohdan had a tough conversation, which allegedly ended with Mr. Bohdan offering to write a letter of resignation, to which Mr. Zelenskyy replied, “Go ahead and write it.” By that evening, sources in the Presidential Office shared the information that Mr. Bohdan was resigning. The next morning, an official statement was released confirming this information.

On February 12, Mr. Yermak held his first briefing in his new role as chief of staff in the Presidential Office. He said that achieving peace in the Donbas on Ukraine’s terms, foreign policy, cooperation with Ukraine’s regions and attracting investment will be the main areas of his work at the Presidential Office. “Of course, for the president of Ukraine, for the Office of the President, one of the priorities will be to end the war in the Donbas in the interests of Ukraine. This vector remains a priority,” Mr. Yermak noted.

“I believe that today Ukraine is the top spot of the world’s attention, and we cannot lose this chance. We must do our utmost to ensure that the attention and interest we have and feel during the international visits of the president of Ukraine give us concrete results,” the head of the Presidential Office said.

“We will work even more effectively with regional state administration heads. Their team has almost been formed. These are young, ambitious, professional people with specific tasks. Today our task as the Office of the President is to ensure that every citizen of Ukraine feels the results of the reforms, the results of the president’s initiatives,” Mr. Yermak emphasized.

In addition, he said, the focus will be on attracting investment “to make Ukraine an investment Mecca.” He explained: “We have specific programs, specific steps on how to do it. Today, we gave this task to our heads of regional state administrations, and this is the concern of the government, as well as all those involved in the work on improving the investment climate in Ukraine.”

Who is Andriy Yermak? The president’s new chief of staff was born in 1971 in Kyiv. He graduated from Kyiv’s Institute of International Relations with a master’s degree in international private law. In 1997 Mr. Yermak founded the legal entity called International Law Firm; he was engaged in the field of intellectual property and commercial law. Between 2006 and 2014, he aided Party of Regions National Deputy Elbrus Tedeyev.

Mr. Yermak became acquainted with Mr. Zelenskyy in 2011, when the future president was the general producer of the TV channel Inter. The two became friends, and in May 2019, newly elected President Zelenskyy appointed Mr. Yermak as presidential aide for foreign policy issues. In that role, he negotiated major prisoner exchanges with Russia as part of efforts to end the war in the Donbas.

Commenting on the change of leadership at the Presidential Office, Volodymyr Fesenko, the head of the Penta Center for Applied Political Studies, told Interfax: “This situation has been repeated many times under previous presidents: under [Leonid] Kuchma and [Viktor] Yushchenko, and in other forms under [Viktor] Yanukovych. A crisis within the team happens sooner or later, and often it occurs already in the first year of the presidency because of intensifying competition to gain access to the president. Figuratively speaking, there are games and wars around the throne. Most often, it is about personal conflicts and the struggle for influence over the president. It is a fairly natural situation.”

Mr. Bohdan had wanted to resign even earlier – after an incident with Mr. Yermak, who was responsible for resolving issues related to the downing of a Ukrainian International Airlines plane in Iran. According to various media reports, Mr. Bohdan did not come to Boryspil International Airport for a ceremony honoring those killed in the plane crash due to a conflict with Mr. Yermak. Mr. Bohdan allegedly placed Mr. Yermak in the second row at the service, which followed diplomatic protocol. Still, Mr. Yermak, who had expended great effort to resolve the Iranian crisis, thought Mr. Bohdan was mistreating him and told Mr. Zelenskyy about the situation. The president stood up for Mr. Yermak, and Mr. Bohdan allegedly said, “Then I will not come.” And he did not show up at the official ceremony.

The tipping point for Mr. Bohdan was President Zelenskyy’s visit to Italy, where he met the pope. The president was accompanied by Mr. Yermak and Minister of Internal Affairs Arsen Avakov, who also has a bad relationship with Mr. Bohdan. Sources say that Mr. Bohdan took this as a personal insult, because he is a Greek-Catholic from Lviv and yet was not taken on a trip to the Vatican, which is important for him.

According to Mr. Fesenko, Mr. Yermak was chosen for chief of staff at the Presidential Office because of his efficient work in the international arena.

“Why Yermak instead of Bohdan? This also is the answer regarding Bohdan’s resignation. Zelenskyy, first of all, values efficiency and effectiveness in his team members, so in the first months Bohdan was the main man around him. Not only because he was the head of the Presidential Office, but he also made a ‘blitzkrieg’ with early parliamentary elections. He actually created and launched the Office of the President and then was demonstrating effectiveness. In recent months, especially in the Russian direction, the negotiations on the [prisoner]exchange, gas transit, Andriy Yermak was the one who demonstrated effectiveness,” Mr. Fesenko pointed out.

Another reason for Mr. Bohdan’s resignation appears to be his fierce personality. According to Mr. Fesenko, “Bohdan has an unsympathetic character, somewhat conflicted, not politically correct in dealing with various people. On the contrary, Yermak, like [Prime Minister Oleksiy] Honcharuk, demonstrated the qualities of the perfect doer. Yermak even said in one of the interviews: ‘The president will say to build a bridge – I will build a bridge.’ And second, no less important, he is a team player. Unlike Bohdan, who is a bit detached from the team, Yermak, as I understand it, has built good constructive relationships with most of Zelenskyy’s team members, especially those who have a history with Zelenskyy since show business times.”

The political scientist added that there won’t necessarily be a sharp change in the policy of the Presidential Office. “I have already heard jokes from members of Zelenskyy’s team saying: the policy will not change from the change of Andriys. The president determines the strategy. The office’s style of work, its organizational and personnel moments may change. There will be no fundamental changes in the nature of the policy, as Zelenskyy determines it.”

Global affairs analyst Michael Bociurkiw commented on the topic for the Atlantic Council. “Shortly after Volodymyr Zelenskyy delivered his inauguration speech last May, the BBC’s Philippa Thomas asked me if the TV comedian-turned-politician ‘is his own man.’ That was a difficult question to address at the time, as oligarch Ihor Kolomoisky had just returned to Ukraine after years in exile, presumably to exert influence over the president,” Mr. Bociurkiw said. “Shortly afterwards, acting against advice to appoint a Western technocrat as his chief of staff, Zelenskyy selected Kolomoisky’s former lawyer, Andriy Bohdan.” It is, therefore, good news that Bohdan is now out.

The analyst said Mr. Bohdan’s ouster “will be celebrated by Ukraine’s lenders and especially by journalists, whom Bohdan treated derisively” and added that “Mr. Yermak, seems skilled at dealing with important interlocutors, ranging from Russian negotiators to shady characters associated with U.S. President Donald Trump. While Yermak may have some questionable connections with Russian business, he is much more suitable than Bohdan.”

Mr. Bociurkiw also noted: “The Zelenskyy administration needs to up its game when it comes to countering negative publicity from the U.S. impeachment proceedings, and Yermak could very well be the right man at the right time to accomplish this.”

Ukraine’s international partners also reacted to the latest events. “We thank Andriy Bohdan for his partnership and commend his efforts to support the recent historic pace of reforms in Ukraine. We look forward to continuing our strong partnership on reform with Andriy Yermak,”, the United States Embassy in Kyiv said in a statement.

Speaking at this first official briefing, Mr. Yermak summed up: “I believe that the Presidential Office should become an expert office of the head of state, where the best, most professional staff will be concentrated, helping the president fulfill his function and achieve results in all directions of his activity.”