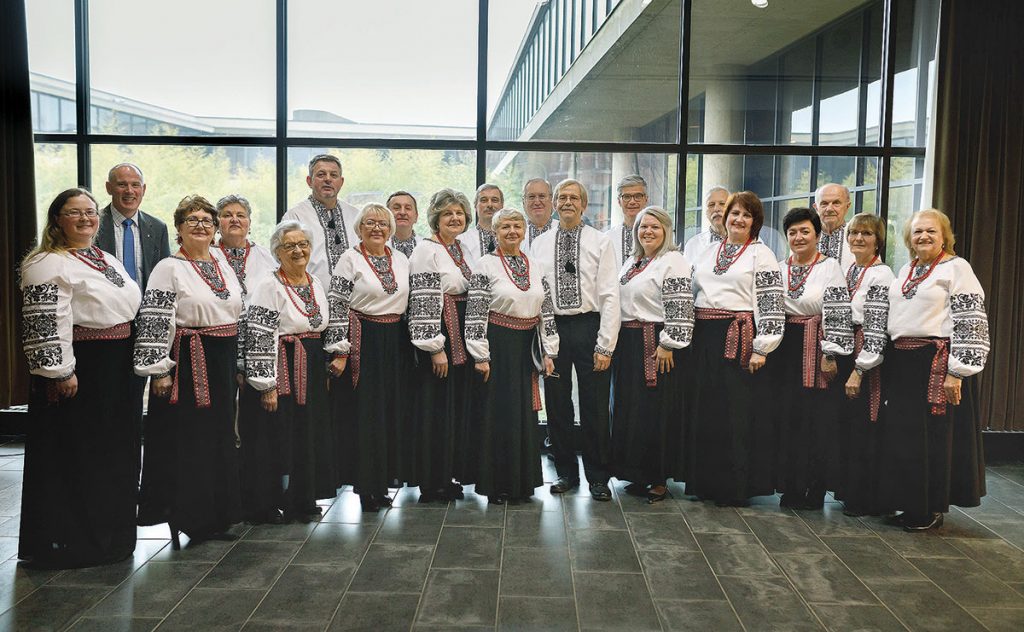 NEW HAVEN, Conn. – The Hartford-based Yevshan Ukrainian Vocal Ensemble under the direction of Alexander Kuzma performed a concert of Ukrainian Christmas and New Year’s carols in the main hall of the Knights of Columbus Museum in downtown New Haven, Conn., on Saturday, January 25. Despite rainy and blustery weather, the afternoon concert drew a large and enthusiastic crowd from across southern Connecticut, and from as far away as Stamford, Conn., Boston and Rhode Island.

The ensemble sang a diverse array of seasonal favorites including Stanislav Liudkevych’s charming arrangement of “Vo Vyfleyemi” and a rousing suite of carols by Kyrylo Stetsenko beginning with “Dnes Poyushche” (“Today we sing of our Newborn King”), as well as several rarely heard works including Leontovych’s “Oi Hordopyshnyi Pan Hospodariu” (“Oh, proud master of this house”).

To give the audience a flavor of the caroling tradition in Ukraine, several members of the ensemble interspersed the songs with “vinshuvannia” and “shchedruvannia”– poetic blessings in both Ukrainian and English. The announcers included Oksana Shuter, Christina Kowinko, Mykhailo Balaban, Michael Romaniw and Ted Jastrzebski.

Recently, Yevshan celebrated its 20th anniversary with a full-length concert at St. Patrick’s/St. Anthony’s Roman Catholic Church in downtown Hartford, Conn. The ensemble comprises singers from eight different parishes in Connecticut. Its mission has been to reach audiences beyond the Ukrainian community. In keeping with that mission, the choir has collaborated with other ensembles, including Chorale Connecticut, the Yale Slavic and Yale Russian Chorus, the Commonwealth Lyric Theater of Boston and the Kobzar Ukrainian Choir of Los Angeles. Yevshan has also staged a number of performances commemorating the Holodomor and an ecumenical prayer service for peace in Ukraine that drew over 1,000 people to the Polish Sacred Heart Cathedral in New Britain, Conn., in April of 2014.

Anyone interested in joining Yevshan is urged to schedule an audition by calling Christina Kowinko at 203-394-1996.