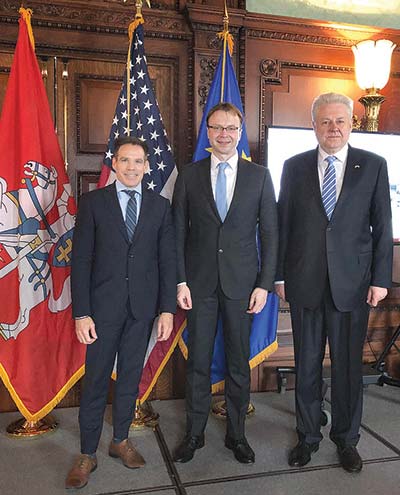 WASHINGTON – At a reception held at the Library of Congress on March 11 to commemorate the 30th anniversary of Lithuania’s restored independence, Volodymyr Yelchenko (right), Ukraine’s ambassador to the United States, and Michael Sawkiw Jr. (left), executive vice-president of the Ukrainian Congress Committee of America, are seen with Rolandas Kriščiūnas, Lithuania’s ambassador to the United States. At the event, Ambassador Kriščiūnas presented a gift to Rep. John Shimkus (R-Ill.), co-chair of the House Baltic Caucus, and Anthea M. Hartig, the director of the National Museum of American History, of a nanocopy of the U.S. Capitol building, which is 600,000 times smaller than its actual size. A nanocopy of the Statue of Freedom, the crowning feature of the Dome of the Capitol, is 10 times smaller than a human cell. The nanocopy of the U.S. Capitol was created by Femtika, a Lithuanian company that is a spin-off from the Vilnius University Laser Research Center.