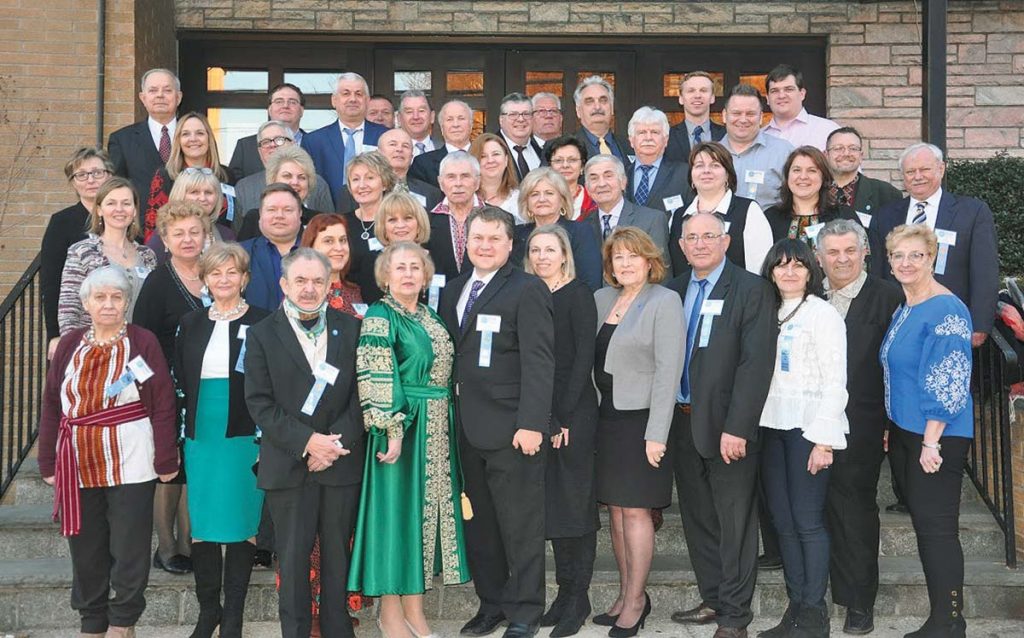 YONKERS, N.Y. – “Lemkivshchyna may have been destroyed as a geographic entity and others may have tried to stamp out the fire of the Lemkos, but what ended up happening was that sparks from that fire flew everywhere, so that Lemkos are now spread across the world and are stronger than ever,” said Mark Howansky after being elected unanimously to his third term as president of the Organization for the Defense of Lemkivshchyna (known by the Ukrainian-based acronym OOL) on March 7 at its 31st National Convention in Yonkers, N.Y.

During the plenary session of the day-long convention, which takes place every three years, Mr. Howansky summarized the organization’s cultural, educational and humanitarian work over the past term. With the 50 delegates of the plenary session, he discussed: OOL’s annual Lemko Vatra festival with distinct Lemko performances by the band Demaj and folk singer Julia Doszna from Poland; providing materials and conducting lectures for young members of the Ukrainian American Youth Organization about the 70th anniversary of the Akcja Wisła forced relocation campaign; developing an electronic library to house all issues of Lemkivshchyna magazine; helping to set up the Yurij Kowalczyk Memorial Fund and direct charitable donations towards the restoration of Lemko churches in Poland and Ukraine; organizing Lemko Easter egg-decorating workshops and social gatherings to preserve the Lemko vernacular; and securing a sizeable donation for the creation of a Lemko scholarly fund, among other things.

“We have honest, passionate people and I thank you for your persistent work and support,” Mr. Howansky said, recognizing and paying tribute to all of OOL’s members. Those he thanked included, but was not limited to, Vasyl Harhaj for organizing the Lemko Vatra for the past 19 years; Zenko and Olena Halkowycz, Lena Howansky, Peter and Julia Kosciolek, and Toma Pyz for promoting knowledge of Akcja Wisła; Stefan Malyniak for his fund-raising efforts; and Marie Duplak for her external affairs representation. The delegates also honored deceased OOL National Board Members Petro Rusynko and Petro Lukaczyn with a moment of silence at the start of the plenary session.

While discussing OOL’s growth, Mr. Howansky said, “I am pleased to say that we now have resurrected branches in Syracuse, N.Y., and Philadelphia, Pa., as well as created a new branch in New Britain (Connecticut).” OOL currently has 10 active branches and has agreed to modify the organization’s by-laws to accept individual virtual members-at-large who might not live near an existing branch.

Mr. Howansky introduced the new heads of the Syracuse branch, John Hvozda Jr. (whose father was OOL president in 1969-1973 and founder of the World Federation of Lemko Ukrainian Associations); the Philadelphia branch – Anna Jaworska; and the New Britain branch – Mark Melnyk. All of them represent a new generation of Lemkos in the United States who have become active in OOL.

Mr. Hvozda noted how he was touched when Mr. Howansky and OOL Second Vice-President Mykhaylo Chomyk came to his father’s funeral bearing the organization’s flag to pay respect to his father’s years of work, and how this sense of unity within the Lemko community eventually led him to agree to take on the new leadership of the Syracuse branch.

Expressing gratitude to his own deceased father who had been active in and introduced him to OOL, as well as to his mother and wife, Mr. Howansky ended his comments at the 31st National Convention by saying that he was proud of being Ukrainian and proud of being Lemko, and that he wished to pass on that pride to his own children. He said he felt happy that OOL’s plenary session had concluded with the election of a strong and united Executive Board (see list below).

He added that he looks forward to working with OOL’s members on future actions they had discussed during the plenary session, ranging from transforming Lemkiv­shchyna magazine into a modern electronic format and reinvigorating the Lemko Ukrainian Museum, to working with lawyers on a class action lawsuit and pushing the Polish Sejm to recognize Akcja Wisła, to cultivating young members and inviting them to take part in events like the next conference of the World Federation of Lemko Ukrainian Associations (known by the acronym SFULO) – of which OOL is a member organization – in 2022 in eastern Europe.

The current president of SFULO, Yaroslava Halyk, who resides in Yaremche, Ukraine, was invited as an honored guest and banquet keynote speaker at the OOL’s convention. Following a moment of silence at the plenary session to remember Stefan Hładek – the recently-departed leader of Zjednoczenie Łemków (Lemko Union) in Poland, also a SFULO member organization – Ms. Halyk thanked OOL for its support of Lemkos around the world, particularly in Ukraine.

Current projects in Ukraine that Ms. Halyk felt SFULO and OOL could partner on include: the development of a museum and skansen on 17 hectares of land that the Ukrainian government has granted for the Lemko Vatra in Monastyrsk; the promotion of a Center of Lemko Studies, led by Volodymyr Kytsak from Ternopil, Ukraine; and the compilation of archival books in Poland by Eugeniusz Misiło listing the names and villages of all those who were forcibly relocated during Akcja Wisła – similar to the three volumes of the “Memory Book of Lemkivshchyna, 1944-1946, Volumes I-III” that Ms. Halyk compiled with funding by the Lemko Research Foundation, listing deportees from the Lemko region to Ukraine.

“Now, no one can tell us that we weren’t there!” Ms. Halyk said when she returned to the topic of the “Memory Book of Lemkivshchyna” and the need to document Lemko history, during her keynote address at the convention banquet.

Opening the banquet were: Oksana Tomaszewsky, who served as MC; Bishop Paul P. Chomnycky OSBM of the Ukrainian Catholic Eparchy of Stamford, Conn., who led the 180 attendees in a prayer; opera singer Stefan Szkafarowsky, who sang the American and Ukrainian national anthems; and Petro Kosciolek, who served as head of the convention presidium and publicly announced the newly elected OOL Executive Board.

“I don’t have anyone preceding me except for Lemkos,” Ms. Halyk told the attendees who filled the banquet hall. Her own family was deported from the Lemko villages of Krzyzówka and Rostok Wielka to Ukraine during the 1944-1946 period. As she shared memories of her mother, who had constantly talked about life in the Lemko region after deportation, Ms. Halyk transitioned smoothly into speaking Lemko to the banquet audience. Using various synonyms in Lemko for the verb “to speak,” she joked how some Lemkos “khvaryly” and some “beshiduvaly,” while her family “gadaly.”

Ms. Halyk emphasized the two goals of preserving the Lemko culture and supporting those who had been removed from the Lemko region. She asked OOL and the larger Ukrainian American community for assistance in promoting a law that recognizes the forced deportation of Lemkos to Ukraine from 1944-1946, which is to be considered by the Ukrainian government. Although it might not be possible to create the compact region of Lemkivshchyna again, Ms. Halyk said, she believes that Lemkos, an organized people, can still carry on the culture of Lemkivshchyna for the future.

The concert that closed the 31st OOL National Convention is perhaps the best proof that Ms. Halyk’s belief is correct. Home-grown U.S.-based groups, such as the folk singing ensemble Na Lemkowyni from the metro New York area and the dance troupe Tsvitka from Sloatsburg, N.Y., performed traditional Lemko songs and dances for the banquet audience. And members of the Moloda Lemkivshchyna youth group from Lviv, Nataliia Kukhar, and Bohdan and Andriana Syvanych, invited the audience to sing Lemko songs with them. Inspired by the popular “Carpool Karaoke” videos in the United States, these young Lemkos often conduct such spontaneous sing-alongs, called “Lemko Spivy,” and then post them on the Internet for others to view. This may be an unconventional way of sharing Lemko culture, but it certainly is a modern way of expanding it beyond the Carpathian Mountains, where the Lemkos once lived, and across the whole world.

Elected to three-year terms in the Organization for the Defense of Lemkiv­shchyna were: