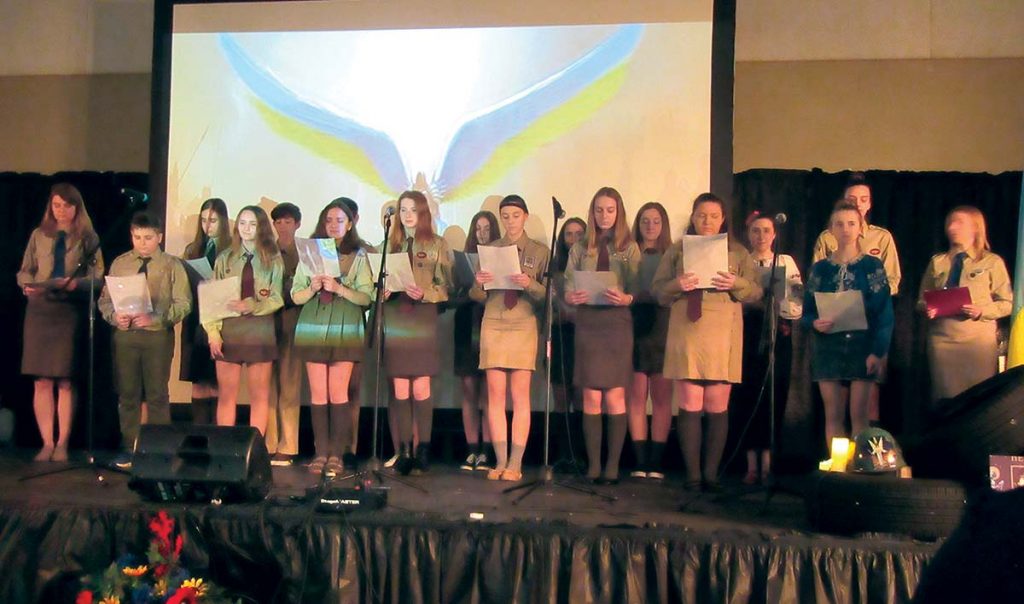 Yevhen Pavlyk
The choir of the American Ukrainian Youth Association of Palatine, Ill.

PALATINE, Ill. – The Ukrainian community of Chicago and Illinois suburbs gathered at the Ukrainian Cultural Center in Palatine on February 8 to commemorate the “Heavenly Hundred” (“Nebesna Sotnia”) heroes that perished at the onset of the Euro-Maidan Revolution or Revolution of Dignity in Ukraine in 2014.

Ukrainian American Veterans Post 32, under the direction of Commander Maj. Peter Bencak, posted colors. Representa­tives of the Ukrainian Congress Committee of America–Illinois Division, Suburban Council of Ukrainian Voters, St. Joseph the Betrothed Ukrainian Catholic Church, Genocide Famine Foundation-U.S.A. Inc., St. Andrew Ukrainian Orthodox Cathedral, Immaculate Conception Ukrainian Catholic Church, and Branch 8 of the Organization for Defense of Four Freedoms for Ukraine honored the defenders of Ukraine with their attendance at this important solemn observance. In addition, Oleh Ivakhniuk, former member of a volunteer battalion in the Donbas, was acknowledged for his service. He is being sponsored by St. Joseph the Betrothed Ukrainian Catholic Church for his 29th surgery and rehabilitation under the auspices of Revived Soldiers Ukraine.

Bishop Venedykt, in his brief remarks, stated: “These hundred were not military trained individuals, these were regular Ukrainian civilians from the many walks of life, joined by Georgians and Belarusians, who made a decision that this was the time not to back away in fear, but, rather to move forward against the force of Russian domination of Ukraine and toward an independent, sovereign and democratic society… They were martyrs for Ukraine and all Ukrainians… He who dies in battle, forever lives in our hearts.”

Congressman Sean Casten’s (D-Ill.) letter of support expressed the spirit of the evening: “Today, we honor those who stood courageously to defend freedom, democracy and human rights. We pay tribute to those who lost their lives during the Revolution of Dignity, as well as during Russia’s invasion and occupation of Crimea and the Donbas. It is important for all of us in the United States and the rest of the world to remember the suffering, sacrifice and courage of Ukrainians who died simply because they were seeking a brighter future for their country. The best way to honor them is to continue to seek a free, fair, united and democratic Ukraine.”

Program participants in this very emotional evening were students of the School of Ukrainian Studies, children’s choirs, choreographic and vocal groups (Iskra and Elehia), the vocal ensemble of St. Joseph the Betrothed Ukrainian Catholic Church and the Panchyshyn sisters vocal duo. Music coordinators were Olha Dopilko, Maria Kyrychenko, Kalyna Wasiunec, Svitlana and Vita Polyak. Lyuba Halatyma and Rostyslav Saciuk were masters of ceremonies for the event.

The Organization for Defense of Four Freedoms for Ukraine was formed on October 27, 1946, at a conference of Ukrainian Americans in New York City under the leadership of Yevhen Liakovych, to support the struggle for a free and independent Ukraine. The name and ideology of ODFFU are based on President Franklin D. Roosevelt’s “Four Freedoms” address before the U.S. Congress on January 25, 1941, in which he spoke of freedom of speech, freedom of worship, freedom from want and freedom from fear.