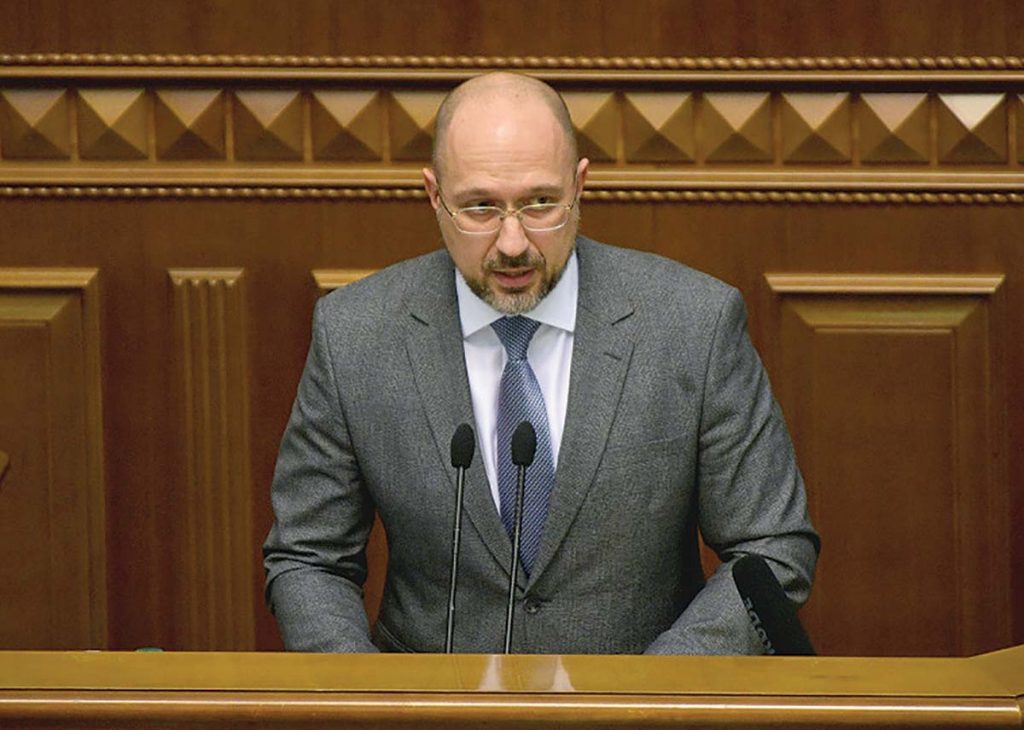 Cabinet of Ministers of Ukraine
Denys Shmyhal speaks for the first time as the new prime minister of Ukraine on March 4 in the Verkhovna Rada.

The youngest leader of a Ukrainian government in modern history, 35-year-old Mr. Honcharuk was appointed on August 29, 2019. Because Mr. Honcharuk’s team had a year of immunity dating from the appointment, the Parliament could not dismiss the government without their acquiescence. That is why the prime minister wrote a letter of resignation.

Prior to the votes, President Zelenskyy addressed the Verkhovna Rada. “This [Hon­cha­ruk’s] government has achievements. Those are reduction of inflation, the fight against shadow markets, including gambling and illegal gas stations. These are the beginning of the privatization of state-owned enterprises that have been looted all these years. These are loans to small and medium businesses, reducing the role of the state in the economy of our country. But the truth is that’s not enough for Ukrainians today,” the head of state stressed.

Mr. Zelenskyy noted that the government of Prime Minister Honcharuk did not have corruption at the top, but added that not stealing is not enough.

“This government knows what to do, but it is not enough to know. And we must not fear the truth, we must admit mistakes. Because on the day we dive into the warm bath of illusions, the whole country will sink,” the president said. According to Mr. Zelenskyy, the government did not provide tools to stimulate domestic production and new production capacity. “Ukraine’s industrial glory is gradually becoming a memory. We risk speaking about our industrial potential people will soon say: ‘That was a long time ago, and that was not true,’” the president said.

“Almost every day, we have protests in various medical institutions. People are afraid of closing hospitals. Doctors are afraid of dismissals. Local authorities are sometimes not ready to take power. There is not enough funding. There are big questions about tariffs, medical equipment, and a huge question about staffing,” Mr. Zelenskyy said. “So, the main question is: Why are we in a hurry? Where are we flying? Doesn’t it seem that with this approach, reform is flying into the wall?”

The president thanked Ukraine’s international partners for their support and assured them: “Our course remains unchanged, and our priorities are the same. We all want and do everything every day to end the war in the Donbas and return all our territories. Because this is our country, and we will continue to move through reforms in all spheres. The course of Ukraine is not a mistake. But some mistakes were made during the course.”

He noted that he was not ashamed of Prime Minister Honcharuk’s government, but would like to have a Cabinet of Ministers of which he could be proud and that is why the current Cabinet should resign.

Ukraine’s new prime minister also addressed the Rada, underscoring that he will continue all the undertakings and reforms of the previous government. However, Mr. Shmyhal noted that many fields of government policy require strengthening. He said it is necessary to enhance the economic bloc in the government to prevent a financial and budget crisis. “We need to review the 2020 budget, especially concerning social payments and pensions of ordinary Ukrainians, there are expenditures that need to be reduced – this concerns salaries and bonuses of officials, including ministers of the new government, members of several supervisory boards and other officials,” Mr. Shmyhal explained.

The newly appointed prime minister also stressed the importance of the fight against the coronavirus outbreak. “The government must work in two directions. The first is medical support for the detection and treatment of the virus. Much has already been done for this purpose: in each region, there are defined medical institutions that are ready for admission of potential patients; family doctors and others have been briefed; there are 12,000 beds in infectious hospitals and 2,500 isolation rooms. But this is not enough. There should be a comprehensive program designed to react to the spread of the coronavirus, and it will become the first brick in building a system to protect the population from biological, climatic and human-made threats. The second is to raise awareness of the people, not only about what to do in case of illness, but also about what the state does for the safety of its citizens. Ukrainians need to know and see that the state is protecting them.”

Summing up, Mr. Shmyhal said that there are simple things to understand that do not require a Ph.D. in economics: that is the simple desire of Ukrainians to have a decent and well-off life. He underlined that “expectations are high, patience is wearing thin, and the deadline for reforms was yesterday.”

The prime minister then submitted the composition of the new Cabinet of Minis­ters, and the deputies of the Verkhovna Rada of Ukraine backed his proposal, as well as the president’s nominations of the ministers of defense and foreign affairs. The following were approved as members of the Shmyhal government:

The Cabinet of Ministers of Ukraine is still incomplete, and Mr. Shmyhal is searching for ministers of education, energy, culture and the agro-industrial complex. The new position of the deputy prime minister of the economy also is vacant.