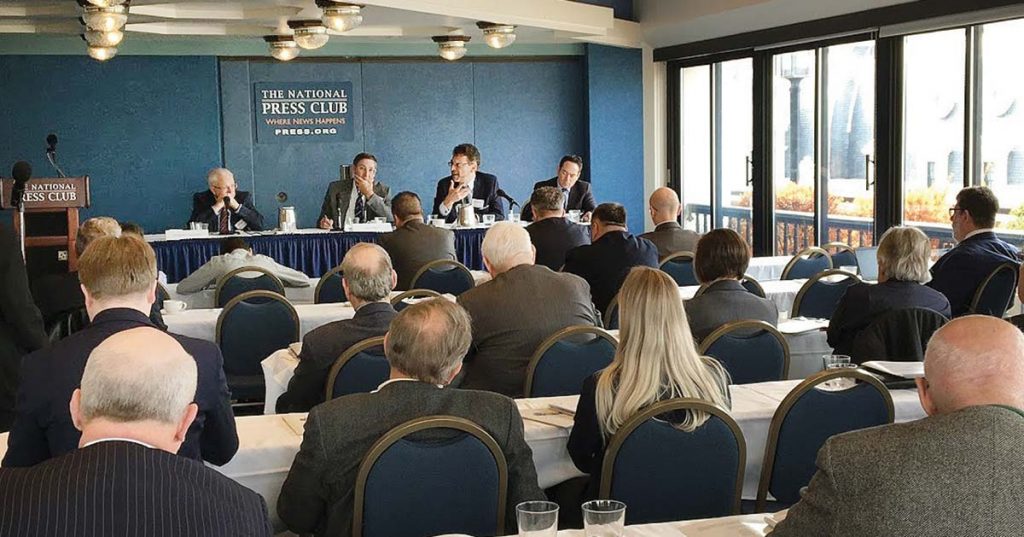 WASHINGTON – The 11th U.S.-Ukraine Security Dialogue took place in Washington on Thursday, March 5. The full-day conference was presented at the National Press Club as a collaborative effort of the Center for U.S.-Ukrainian Relations (CUSUR), the American Foreign Policy Council, the U.S.-Ukraine Foundation and the Ukrainian Congress Committee of America.

Prof. Walter Zaryckyj of CUSUR introduced Ambassador Yelchenko, who then highlighted potential points of discussion regarding Ukraine’s National Security Strategy before departing for a full day of meetings and events. Ambassador Kyslytsya, visiting for the day from New York City, who was able to remain at the National Press Club for the entire day of discussion, participated by questioning various presenters and then offered the closing words of the conference, drawing on his previous position as Ukaine’s deputy minister of foreign affairs.

Joining Ambassador Kyslytsya to close the event was Andriy Futey, president of the Ukrainian Congress Committee of America (UCCA). Having recently returned from Ukraine, Mr. Futey pointed out the sudden change of Ukraine’s Cabinet of Ministers that had preceded this conference by less than 24 hours. Moreover, that major change in government had taken place only a few hours after more than a third of all delegates for the Democratic National Convention had been assigned, with 14 state primaries and one caucus eliciting nearly a fifth of all Democratic primary voters in a single day.

In response to Russian armed forces violating the ceasefire in the Joint Forces Operation (JFO) area in eastern Ukraine 11 times on March 1, and the 22 violations on February 18, Mr. Futey urged the prioritization of NATO’s Enhanced Opportunities Partners program for Ukraine, and the renewed possibility of Major Non-NATO Ally (MNNA) status for Ukraine. Mr. Futey repeated the UCCA’s recent call to get involved in this year’s presidential and congressional elections, encouraging Ukrainian Americans to volunteer for campaigns and to engage with candidates on the campaign trail.

The co-chair of the Congressional Ukraine Caucus (CUC), Rep. Andy Harris (R-Md.), joined Ambassador Yelchenko at the start of the day in welcoming the conference attendees and assembled presenters. In his remarks, Rep. Harris highlighted the “pressures being brought on Russia” by the United States, including lethal aid being provided to Ukraine’s security forces and economic sanctions. Leading this support for Ukraine is the understanding by members of Congress that “Ukraine shares the ideals of liberty and freedom with the United States,” and while the United States realizes that Ukraine is an “important ally,” Ukraine’s leadership has also made clear to them that “the U.S. is their best ally in the entire world,” Rep. Harris noted.

Reflecting the bipartisan support of Ukraine in Congress, Luke Coffey of the conservative Heritage Foundation chaired a morning panel that featured remarks by a foreign policy advisor to former vice -president and current presidential candidate Joe Biden. The senior director of the Penn Biden Center for Diplomacy and Global Engagement, Mr. Carpenter began his presentation by referencing the very recent change in Ukraine’s Cabinet of Ministers – a development that forced him to scrap most of his prepared remarks.

In discussing Ukraine’s progress in reforming its Defense-Industrial Complex, Mr. Carpenter highlighted President Zelenskyy’s November 2019 appointment of Aivaras Abromavičius as director general of Ukroboronprom as a recent positive development.  Overseeing some 130 companies and employing 80,000 employees who make products from tanks to planes to missiles, Mr. Abromavičius is “leading a series of really deep and lasting reforms,” Mr. Carpenter commented. Some of factories on which Ukraine relies to build military vehicles and supply them with armaments unfortunately are remnants from the Soviet era, with the associated deterioration that comes from age. The poor quality of such facilities isn’t a good enough return on investment for Ukraine’s state funding, and the new management team at Ukroboronprom faces the daunting task of making sure that’s Ukraine’s defense industry cuts down on economic losses such as these, the speaker added.

Viktor Yahun, from Ukraine’s Agency for the Reform of the Security Sector, also participated in this panel, which further touched on Ukraine’s NATO prospects during the question and discussion period.

Additional panels were chaired by Herman Pirchner, the founding president of the American Foreign Policy Council (AFPC); Stephen Blank, of the Foreign Policy Research Institute; Jonathan Katz of The German Marshall Fund of the United States; and Robert McConnell of the U.S.-Ukraine Foundation.

Attendees were able to attend the daylong conference free of charge due to the generous contributions of the Self Reliance New York Federal Credit Union, the Heritage Foundation of the First Security Federal Savings Bank, the SUMA Yonkers Federal Credit Union and the Toronto-based Buduchnist Credit Union.