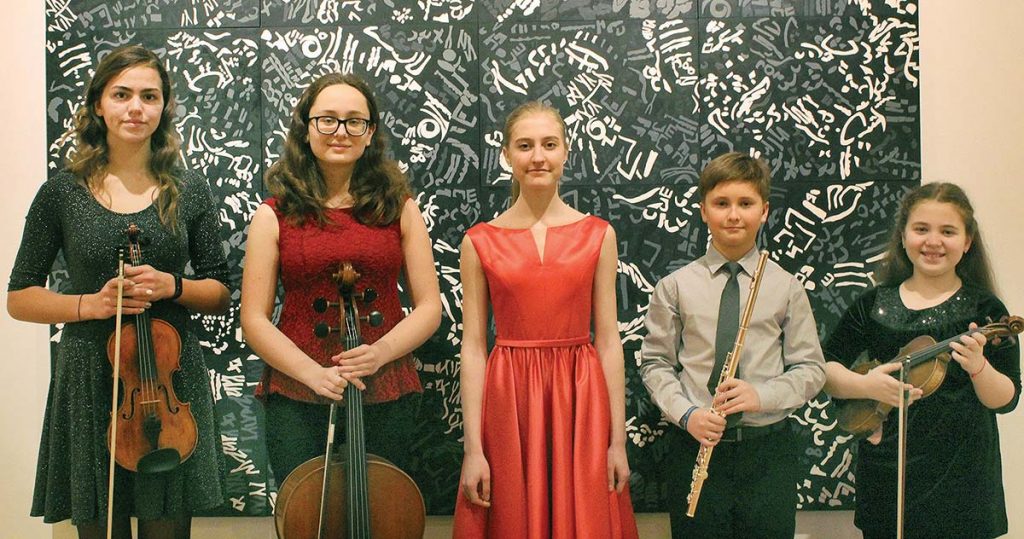 Ulyana Dmytriv
At the Ukrainian Institute of Modern Art (from left) are: Olga Salamakha, Iryna Petryk, Evanhelina But, Christian Tsikhun and Julia Perekhozhuk.

CHICAGO – On a sunny and warm Sunday, February 16, attendees at the Ukrainian Institute of Modern Art basked in the warmth of the beautiful sounds emanating from overachieving minors, each blessed with copious musical talent.  To say they were thrilled by the performance of the six very gifted young Ukrainian musicians would be an understatement.

In a program developed by Michael Holian, chair of the Music Committee at the Institute, and Andriy Chuiko, six outstanding young musicians, ranging in age from 10 to 17, were selected. Each of the performers is known in the Ukrainian community from previous performances on special holidays and commemorative events. All of them have also demonstrated their hard work and ambition by winning either first- or second-place honors in regional, national or international competitions.

Opening the program was Kyiv-born pianist Myroslav Mykhailenko, 15, one of the more mature musicians, who won first place at the French Concours International de Piano Ville do Gagny, among others. For his impressive performance of Johannes Brahms “Variations on a Hungarian Theme,” Mikhail Glinka’s “The Lark” and Lev Revutsky’s “Song,” Op. 17, he was showered with extended applause.  Violinist Julia Perekhozhuk, at age 10 the youngest performer, was equally impressive, playing Franz Joseph Haydn’s Violin Concerto in G Major accompanied by her mother, Oksana Pidruchna, a known music professional in Chicago. The audience was so taken by her playing that applause persisted even after she left the stage.

In a change from the usual piano and string players, 11-year old Christian Tsikhun performed on a flute, and in a seemingly effortless way delivered Georg Philipp Telemann’s Sonata for Flute and Piano accompanied by Maryana Lahanyak. The audience loved it, just as they did another Baroque piece by the great Johann Sebastian Bach, his Prelude from Cello Suite No. 2, played by 16-year-old Iryna Petryk, a student of Oksana Danylyk, with focused concentration, knowledgeable interpretation and impressive, near-perfect intonation.

Fifth on the program was violinist Olga Sofia Salamakha, who chose the well-known one-movement concerto by Jean-Baptiste Accolay. This work is very often given students to perform when they reach a certain level of musical maturity and can handle the technical requirements. Fifteen-year-old Ms. Salamakha, accompanied by Ms. Pidruchna, was up to the challenge.

The last to perform was pianist Evanhelina But, at 17 the oldest and, having played piano from age 3, the most mature musician.  In 2014 she entered the Kyiv Specialized Secondary Music School named after Mykola Lysenko. She is also the winner of numerous international competitions in Ukraine, Russia and Estonia.  Among her successes are: first prize in Pervotsvit debut in Kherson (2011); Nova Kakhovka, first and third prizes (2013) and first and second prizes in 2016; the Yevhen Stankovych Kyiv, second prize (2015) and Grand Prix (2019); and second prize at the Horowitz Competition in Kyiv in 2016.  Ms. But has performed solo concerts in Kyiv as well as two in the U. S.  Her performance of Frédéric Chopin’s Ballade No. 2 and Myroslav Skoryk’s “Burleska” left no doubt in anyone’s mind that this young performer will continue to garner recognition in her musical pursuits.

This concert of young talents shows the Ukrainian community in Chicago has much to be proud of because it has nurtured its young generation to achieve greatness.  We, as a community, need to always support these young musicians with our presence at their performances and with our applause.