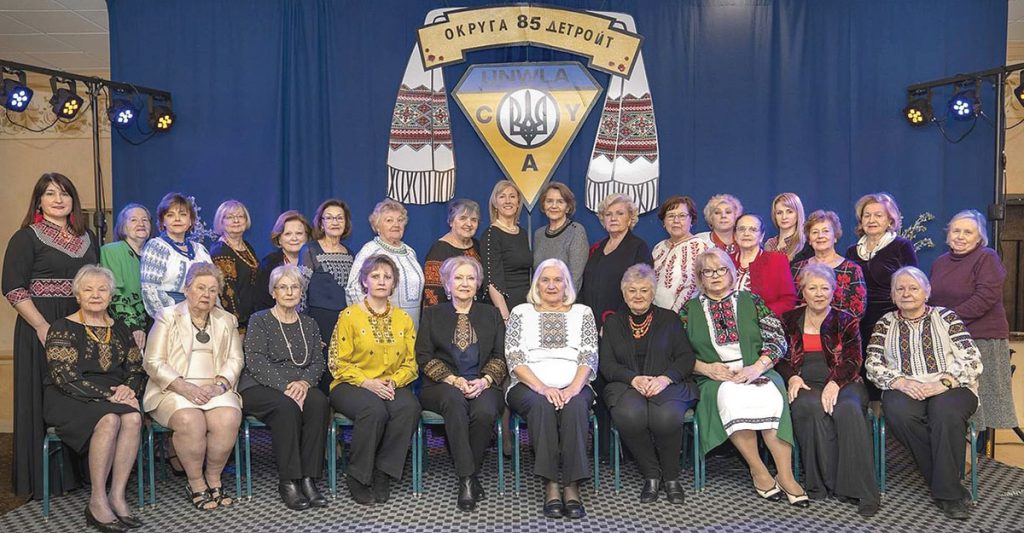 Mykhailo Boryslavskyi
“Soyuzianky” gathered on the 85th anniversary of the Detroit Regional Council of UNWLA.

WARREN, Mich. – The Ukrainian Cultural Center of Detroit on February 23 held a full-capacity public event on the occasion of “Soyuzianka Day” (a Soyuzianka is a member of the Ukrainian National Women’s League of America [UNWLA]). This year the UNWLA Detroit Regional Council celebrates its 85th anniversary.

Emphasis this year was given to the celebration and presentation of several awards to a prominent public figure in the metropolitan Detroit area, Vera Andruskiw.

Ms. Andrushkiw – an educator and active member of the Ukrainian American community – led Detroit’s Committee in Defense of Human Rights in Ukraine in the years 1972-1976. In 1974-1979 and 1981-1888 she taught Ukrainian language, literature, culture and history at Immaculate Conception Ukrainian Catholic High School in Hamtramck, Mich., where she began the tradition of staging Ukrainian-language plays with her colleagues.

As a social activist, Ms. Andrushkiw has also been actively involved in commemorating and informing the American public about the tragedy of the Holodomor. Last year she participated in a conference in Lansing, capital of Michigan, and Hope College that introduced participants to the Ukrainian Famine-Genocide of 1932-1933. Along with Doris Duzey, Dr. Olena Danylyuk and Marie Zarycky-Cherviovskiy, she prepared proposed educational materials – lesson plans on the genocidal Famine in Ukraine so that teachers in Michigan could use them to teach the Holodomor alongside other topics of genocide in U.S. schools.

Since the re-establishment of Ukraine’s independence, Ms. Andrushkiw has been actively involved in the development of business education in Ukraine. In 1991-1999 she organized and coordinated internships for students from Lviv Institute of Management (LIM) to the School of Business at Wayne State University (WSU). In addition, she received a grant from the U.S. Information Agency to exchange faculty of Lviv State University, Lviv Polytechnic University and LIM with WSU, so that the visiting professors from Ukraine could have the opportunity to work on new courses and new materials and on the translation of economic textbooks for their students in Ukraine.

Ms. Andrushkiw was the visiting lecturer on Ukraine during the summers of 1997 and 1998 at the University of Iowa as part of the U.S. Department of Defense National Security Education Program to internationalize the curriculum and increase study abroad programs at Historically Black and Hispanic Colleges and Universities. She also organized scholarships for five students at WSU School of Business Administration through the Russian and Eurasian Awards Program of NAFSA, the association of international educators.

Later she led the Detroit Regional Council of the UNWLA. When the war in eastern Ukraine began, she, along with the Ukrainian community and the Detroit Regional Council, was instrumental in helping to send clothing and provisions to Ukrainian soldiers and to internally displaced persons in Ukraine. She helped organize and participated in roundtable discussions on the Revolution of Dignity at Wayne State University.

Thanks to UNWLA funding, the Ukrainian Catholic University (UCU) was able to open the Center for Psychological Counseling “Prostir Nadiyi” (Space of Hope) in which all who are affected by war can receive free professional psychological/psychotherapeutic assistance under existing international protocols.

Through the auspices of Ukraine’s Honorary Consul Bohdan Fedorak, Ms. Andrushkiw received a certificate of honor from the ambassador of Ukraine to the United States, Volodymyr Yelchenko, “For personal contribution in strengthening a positive image of Ukraine, the development of Ukrainian education, promoting the preservation of Ukrainian cultural and historical heritage in the territory of the United States, and many years of active public work.”

She also received a certificate of appreciation from the Very Rev. Volodymyr Petriv, the dean of the Detroit Parishes in “grateful appreciation and recognition for many years of dedication, diligence and valuable contributions to the Parish Communities of the Ukrainian Catholic Church of the Detroit Deanery, Michigan.”

The most important and the most moving moment at the event was the awarding of an honorary doctorate to Ms. Andrushkiw from the Ukrainian Catholic University of Lviv (UCU) by Vice-Rector Natalia Klymovska. Ms. Klymovska spoke eloquently about her experience at Wayne State University School of Business (1995 internship) and what she learned from Ms. Andrushkiw that served her well in her position as public relations director and vice-rector at UCU.

The next day, Metropolitan-Archbishop Borys Gudziak, president of UCU, called from Rome to congratulate Ms. Andrushkiw on the honorary doctorate.

All this took place in the presence of many distinguished guests, among them, the national president of the UNWLA, Marianna Zajac; retired U.S. Congressman Sander Levin, a good friend to Ukrainian Americans; U.S.-Ukraine Foundation founders Nadia and Robert McConnell; Prof. emeritus Assya Humesky, the honoree’s mentor from the University of Michigan; Ms. Andrushkiw’s colleagues from Wayne State University, former Dean of the SBA Dr. William H. Volz, Dr. Ahmad Ezzeddine, Prof. Alina Klin, Prof. Dickran Toumajan and his wife, Anahit, Dr. Marta Dmytrenko-Ahrabian and MBA graduates; Ukrainian clergy of Detroit; honored guests from Ukraine and several different U.S. states many; many Detroit Soyuzianky; Ms. Andrushkiw’s family and friends from near and far; her aquaerobic friends, and neighbors and guests from the metropolitan Detroit community.

On the occasion of the 85th anniversary of the establishment of the Detroit Regional Council, its president, Ms. Glinska, received a letter of commendation from UNWLA President Zajac.

After the awards and luncheon, Honored Artist of Ukraine Iryna Lonchyna performed an excellent rendition of her well-known songs that added to the festive mood of all present. In addition, the local ladies’ ensemble, Vyshyvanka (UNWLA Branch 76) sang a lovely medley of Ukrainian songs.

Oksana Malanchuk is the press officer (English) of the Detroit Regional Council of the Ukrainian National Women’s League of America.