Ukrainians in the U.S. and the November 2020 elections

Recent events in the United States have propelled Ukraine and Ukrainians to unimaginable levels of notoriety. The consequences of this notoriety can be considered, in the best of cases, a mixed blessing.  Be that as it may, this experience has underscored the importance of active participation in the political process. The upcoming November 2020 elections present opportunities and challenges for our community.

We present here data developed by the Center for Demographic and Socio-economic Research of Ukrainians in the U.S. (center for short) at the Shevchenko Scientific Society in New York (society for short) that may be useful during the primary process and the November elections.

The comprehensive database on Ukrainians in the U.S. developed by the center allows one to analyze different aspects of the Ukrainian-American ethnic group. A large amount of information generated from the database is posted on the center’s website (http://www.inform-decisions.com/stat), with interactive indicators, tables and maps.  The website is consulted daily by many persons and institutions from the U.S., Canada, Ukraine and other countries from all over the world.  An important characteristic of this information is that it is reliable and objective, as it is based on official U.S. data.

Another product of the center is the recently published “Atlas of Ukrainians in the U.S.,” the first of its kind for any ethnic group in the U.S., which is available on Amazon and the society’s website (http://shevchenko.org/books/).  Besides providing a comprehensive data-based description of Ukrainians in the U.S., the Atlas provides background information that can be useful when examining the voting data presented here and on the center’s website.

To be useful, data has to be updated on a regular basis.  For many years, census data on ethnic groups in the U.S. was updated every 10 years. Since 2005, the data collected by the census every 10 years is now collected yearly by the American Community Survey (ACS).  The data becomes available about a year after it is collected and the center can process it within a year.  Thus, we can have updated data on Ukrainian Americans with a lag of two years.  This is important for applications that require timely data.

Two years ago we posted on the center’s website, in time for the midterm 2018 elections, detailed 2016 data on potential voters of Ukrainian ancestry, and a summary of the data was published in this newspaper.  Here we present similar data from the 2018 ACS that can be useful for the November 2020 elections.  No data is available for Ukrainians (or any ethnic group) on party membership or voting behavior, but we have data that allows us to estimate how many persons of Ukrainian ancestry meet the legal requirements for voting, i.e., U.S. citizen and age 18 years or older.  We call them potential Ukrainian voters.

According to the 2018 ACS, there were 708,273 potential Ukrainian American  voters, equivalent to 0.32 percent of all potential voters in the country.   An important fact is that 19 percent of these 708,000 are Fourth Wave immigrants. This means that these new immigrants are becoming U.S. citizens at a fast pace and increasing the pool of potential Ukrainian American voters.  This presents new challenges for encouraging active political participation among members of our community, especially in Metropolitan areas (MAs) where they make up more than half of potential Ukrainian voters like Sacramento, Calif., and Seattle, Wash.

Ukrainian American potential voters have a somewhat older age structure than all potential U.S voters.  The median age of U.S. voters is 47.5 years and 51.1 years for Ukrainian Americans (median age means half are younger and half are older than the median age).  As shown in Figure 1, the percentage of Ukrainian potential voters age 18-24 at 8 percent is lower than that of total U.S. voters (11 percent) and the percentage age 65 years or more is higher than that of all U.S. voters (29 and 21 percent, respectively).  The older age structure is an advantage for voting purposes, as older persons have a substantially higher voter turnout than younger persons, and this can be pointed out when talking with political candidates about Ukrainian American voters.

Besides classifications by age and by Fourth Wave immigrant status, potential voters can be disaggregated by other characteristics, such as sex, marital status, level of education, etc.  Geographical disaggregation by state, metropolitan area and selected counties make the data useful for elections at different levels: president, senators and congressmen at federal and State levels; governors, mayors and other officials at state, metropolitan area and county levels.

Table 1 presents the numbers of Ukrainian American potential voters for the 18 states with 10,000 or more voters in 2018.  The data is disaggregated by age group and includes the percentage of Ukrainian voters as part of the total U.S. voters in each state. New York State has by far the largest number of potential Ukrainian voters with 103,000, followed by Pennsylvania with 88,000, California with 69,000 and New Jersey with 53,000.  As expected, Florida has the highest percentage of older voters (41 percent are age 65 or older), while Washington State and Oregon have the highest percentages of younger voters (18 percent each in the 18-24 year age group). This is due to the fact that these states have the highest percentages of Fourth Wave immigrants. 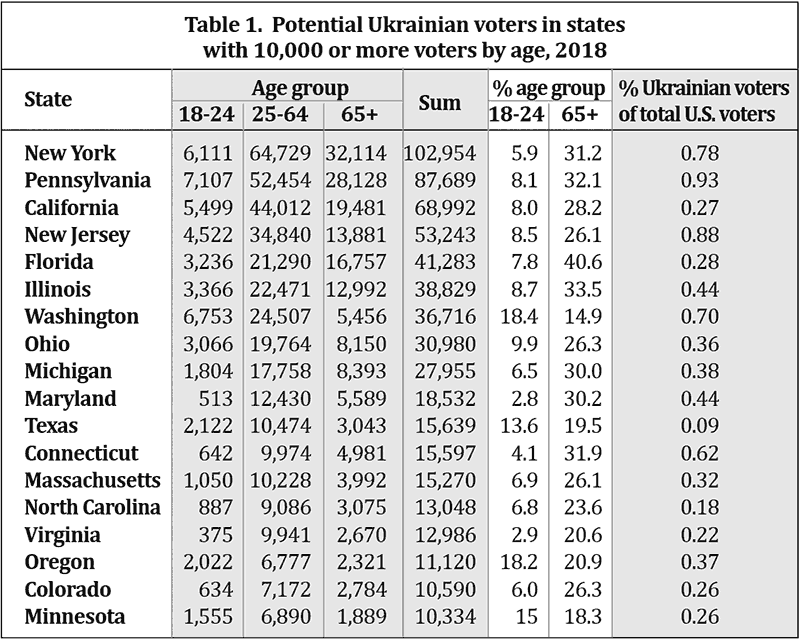 The number of Ukrainian voters in these states makes up less than 1 percent of the total of U.S. potential voters.  Ukrainians have the highest percentages in Pennsyl­vania with 0.93 percent, New Jersey with 0.88, New York with 0.78, Washington State with 0.70 and Connecticut with 0.62 percent.  The only other state with a high relative percentage of Ukrainian voters is North Dakota with 0.77, but it has only 4,200 potential voters. The full list of states with this information is posted at the center’s website.

If we consider all 50 states, the relative number of potential Ukrainian votes is quite low in most states.  Their percentage is under 0.1 in 10 states, and between 0.1 and 0.2 percent in 15 states. However, in six states (listed above)  and the District of Columbia, the percentage of Ukrainian voters is 0.5 or more.  Although Ukrainians in these states have, in theory, more political power, this does not mean that Ukrainians in states with lower proportions of voters can be less influential.  For example, the relative percentage in California is only 0.22, but the number of potential Ukrainian voters is 73,500, and Illinois and Ohio have 35,700 and 33,700 potential voters, respectively. These numbers can be decisive when very small numbers of votes often decide elections.

The ACS gathers data from a representable sample of approximately 2.5 percent of the U.S. population. This means that not all counties are captured in the sample and there is no data for some counties.  As an example, we show in Table 3 data on potential Ukrainian voters for counties in New Jersey. Data for all available counties by state are posted on the center’s website. 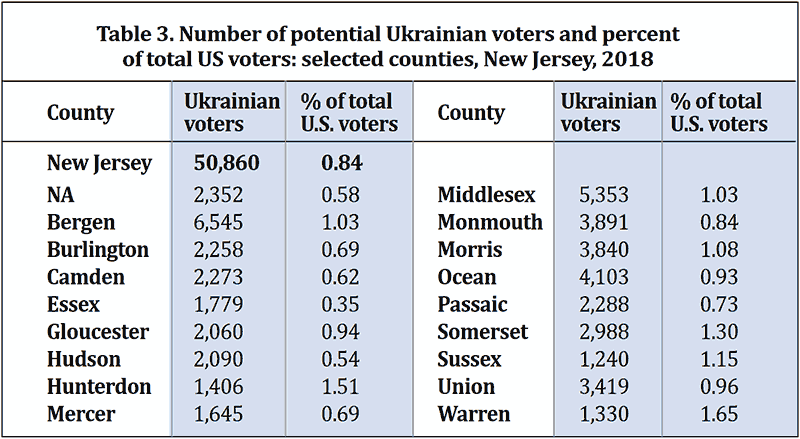 There were 50,860 potential Ukrainian voters in New Jersey in 2018, and they represent 0.84 percent of all potential voters in the state. There is data available for 17 of the 21 counties in New Jersey; data for the missing counties are reported in the row NA.  Bergen and Middlesex counties have the largest numbers of potential Ukrainian voters, 6,500 and 5,300, respectively. Warren County has the highest relative percentage of Ukrainian voters with 1.65, followed by Hunterdon with 1.51, Somerset with 1.30, Sussex with 1.15, Morris with 1.08, and Bergen and Middlesex with 1.03 each.

Although these data are not ideal, they serve several purposes. First, they provide a detailed picture of the voting potential of Ukrainian Americans across the country by state and MA, and in many cases at the county level.  Second, they can be used in contacts with political candidates and party officials to: a) inform them about the voting potential of Ukrainians for their candidates; b) find out about and/or influence their position about foreign policies that may affect Ukraine.