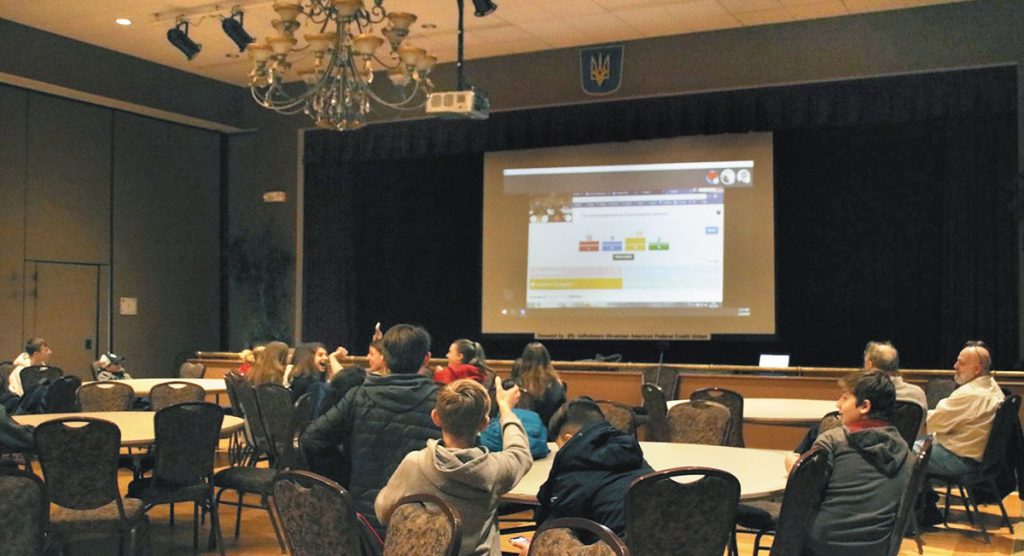 WHIPPANY, N.J. – Never did I expect that a historical event would make history a second time 102 years later.

On Saturday, February 29, our Saturday School of Ukrainian Studies (Ridna Shkola) in Whippany, N.J., and the Plast Ukrainian Scouting Organization branch of Newark, N.J., which is based in Whippany, gave Plast scouts the opportunity to once again learn about the Battle of Kruty.

With the help of Plast senior counselor Roman Shyprykevych and in conjunction with Ridna Shkola, a Skype meeting was arranged for us to learn more about this significant battle in Ukrainian history. The Skype meeting took place in the main hall at the Ukrainian American Cultural Center of New Jersey in Whippany where we Plast scouts attend Ridna Shkola.

The history lesson presenters were a group of “yunaky” (Plast scouts) from Kyiv, whose scout troop is named in honor of the Battle of Kruty. These Plast members learn not only about scouting but also about the history of Ukraine. In fact, they live this history. This particular troop makes an annual trip on the Battle of Kruty anniversary to commemorate the event. Also worth noting is that a significant number of the troop’s scouts have made their Plast Pledge on the site of this historical battle.

The Battle of Kruty, which took place on January 29, 1918, was significant in many ways. The town of Kruty, located 130 kilometers northeast of the capital of Ukraine, was a significant railroad hub for military transport. There, a group of about 400 young men, consisting mostly of university students from the Kyiv Cadet School and students from the Legion of Ukrainian Sich Riflemen, were able to halt the advance of Russian troops towards Kyiv, the capital of Ukraine. The group of 400 was hugely outnumbered by the Russian force of close to 3,000 soldiers.

Nonetheless, they were able to slow the advance of the invading Russian army, a feat that was key in giving the Ukrainian delegation time to sign the Peace Treaty of Brest-Litovsk that recognized the Ukrainian National Republic. Unfortunately, the Ukrainians at Kruty suffered many losses during the battle. While many of the young soldiers were able to return from the battle, the last group farthest from the escape train was unable to make it fast enough and its members were captured and killed by the enemy.

What intrigued me most and really helped bring this history lesson into focus was that the young men who fought in the Battle of Kruty 102 years ago to defend Ukraine’s freedom were largely the same age as the young men (the yunaky) on the Skype call in Ukraine on this Saturday. These Plast scouts were well organized, and they gave us a brief introductory lesson about that day in Ukraine’s history. They had pictures and even battle diagrams showing how the group of young men impacted and influenced Ukrainian history. To reinforce the information that was shared with us, the scouts from Ukraine prepared an interactive online game during which we answered event-related trivia.

The call ended with a question and answer session with the Plast scouts from Kyiv and Whippany discussing Plast life: how many members each group has, what camps are like (how long they are, what kind of food is served, etc.). It was a bunch of kids talking to a bunch of kids.

In the end, the historical events of Ukraine in 1918 were overtaken by the historical nature of this day in February 2020 – an intercontinental lesson via the Internet and the beginnings of new friendships. Both groups exchanged Instagram information with the intention of staying in touch.

We expressed thanks to Mr. Shypryke­vych for arranging this online meeting and setting up the technical requirements of the call, and to Ridna Shkola’s Director Yuriy Kosachevich for allowing us to try this distance learning experience. But most of all we thanked the yunaky of Troop No. 75 named in honor of the Battle of Kruty for presenting this history lesson to us in such a novel way.

Pavlo Pencak is a 12th grade student of the Lesia Ukrainka School of Ukrainian Studies in Whippany, N.J., a senior at Morris Knolls Regional High School in Denville, N.J., and a member of Troop No. 5 of Plast Ukrainian Scouting Organization’s Newark branch.