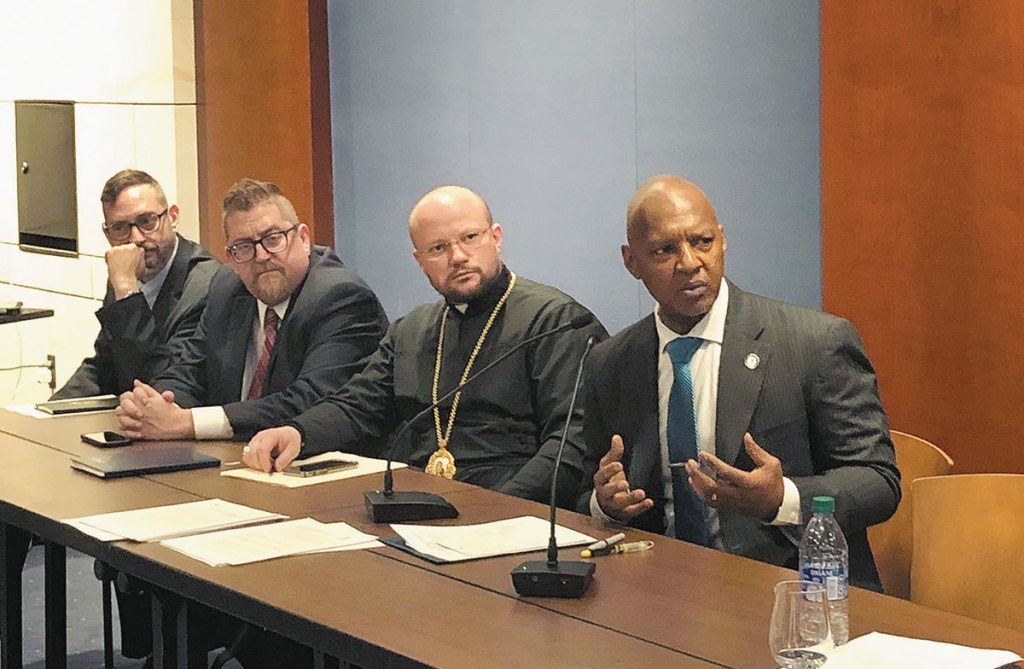 WASHINGTON – In mid-March, the United States Congress witnessed a unique briefing dedicated to the plight of Ukrainian veterans who served on the frontlines in defending Ukraine against Russia’s aggression.

In his opening remarks, Mr. Sawkiw spoke of the significance of being a veteran of the current war in Ukraine: “This war, a war of Russian aggression, came about not by the will of the Ukrainian people. But the might and strong will of the Ukrainian people have stood fervently in defense of their country from Russia’s 2014 illegal annexation of the Crimean peninsula and [Vladimir] Putin’s invasion of eastern Ukraine.”

Quoting the South African human rights activist Archbishop Desmond Tutu – “If you are neutral in situations of injustice, you have chosen the side of the oppressor” – Mr. Sawkiw related that the purpose behind the congressional briefing was to prevent complacency about the Russian aggression against Ukraine that has occurred since February 2014 and continues to this day.

Rep. Marcy Kaptur (D-Ohio), co-chair of the Congressional Ukraine Caucus, reiterated that the war in Ukraine is not just a “Ukrainian war, but a war against democracy in Europe and worldwide.” She emphasized that the war for Ukraine’s veterans does not end once they return from the frontline, as many veterans experience symptoms of PTSD, and challenges of social re-integration, obtaining proper veterans’ services, searching for jobs and the like.

Ukraine’s ambassador to the United States, Volodymyr Yelchenko, thanked the sponsors for organizing the event to bring attention to the needs and plight of Ukrainian veterans. The ambassador related the stark reality of a “hot war” in Europe, with all its “ceasefires,” has brutally taken the lives of over 14,000 individuals and internally displaced millions more throughout the country. Ambassador Yelchenko said he is grateful for the assistance provided to Ukraine by the United States, and he underlined the strong strategic partnership between the two countries.

The highlight of the congressional briefing was presentations by two Ukrainian veterans who sustained severe injuries in service to their country. Member of Parliament Yana Zinkevych and Deputy Minister for Veterans, Occupied Territories and IDPs Oleksandr Tereshchenko appeared at the briefing in their military uniforms – the former in a wheelchair, the latter with two upper body prosthetics. Both spoke of their experiences on the frontlines and their active community lives after receiving the necessary medical treatment and rehabilitation.

As the founder and commander of the Hospitaliers Battalion, a tactical medicine battalion providing medical care at the frontline, Ms. Zinkevych spoke of the NGO’s work in treating those injured in the war. The NGO receives donations from private entities and functions independently of the Ukrainian government. Most notably, Ms. Zinkevych stated that the war in eastern Ukraine is between “good and evil” forces and warned that others may be in the path of future Russian aggressive measures.

Deputy Minister Tereshchenko’s mission at the ministry is to honor the memory of veterans and develop a positive image of veterans within society. The challenges facing a returning veteran include: low availability of social services, rejection of psychological rehabilitation, retention of employment and unfair treatment by society. He said veterans primarily receive support (both psychological and welfare) from like-minded veterans. He was passionate in his presentation that the Ukrainian government’s major role in the rehabilitation of Ukrainian veterans is to reintegrate them into society so that they can become “assets” and not a liability for society.

While in the military, Mr. Tereshchenko had defended the Donetsk airport in October 2014 and suffered major injuries in a mine explosion. He was presented the Order of Courage Award – Third Degree for his heroism on the battlefield.

Of particular interest were presentations by two Ukrainian military chaplains – Bishop Stepan Sus of the Ukrainian Greek-Catholic Church and the Rev. Sviatoslav Yurkiv of the Orthodox Church of Ukraine. Both religious leaders spoke of ministering to soldiers on the frontlines, as well as to the returning veterans and their families.

Bishop Stepan, who was consecrated a bishop in January, was pastor of the Garrison Church of Ss. Peter and Paul in Lviv . He has conducted over 75 funerals for Ukrainians killed in the Donbas region.

The Rev. Yurkiv recalled that before coming to Washington he had asked “newly returning defenders of our country” what they needed. “They are dedicated, humble souls. One of them [veterans]said after a long pause ‘We need to be remembered, not abandoned,’ ” he related.

Both the IREX and UAV representatives spoke of their efforts to assist in programs for Ukrainian veterans. IREX has received a $5 million grant from the United States Agency for International Development (USAID) for veterans’ programs in Ukraine. The UAV has been instrumental in bringing wounded Ukrainian soldiers to the United States to receive urgent medical care otherwise unavailable in Ukraine. Since the 2014, the UAV has furthered collaborative partnerships with Ukrainian and diaspora organizations to address the needs of Ukrainian veterans.

Henry Huntley, senior advisor to the executive director at the U.S. Department of Veterans Affairs, spoke of the VA’s programs in the United States and how to extend capacity-building with partnering countries such as Ukraine. “The experience we have in the United States can dramatically assist the programs in Ukraine as they offer services to their veterans.”

In concluding the program, Mr. Sawkiw reminded all in attendance to contact their elected officials to inform them about the ongoing war in Ukraine and the plight of Ukrainian veterans. “Reach out to thank them [elected officials]for their tremendous support in the past,” stated Mr. Sawkiw, “while advocating for greater assistance from the United States in the future.”

The briefing concluded with a reception to meet the panel presenters and promote collaborative efforts to assist the Ukrainian veterans.

Later that evening, OliaFilm opened a multimedia display, “Heroes of Liberty,” at the Embassy of Ukraine. The installation was dedicated to Ukrainian veterans and the fallen who have defended liberty in Ukraine against Russia’s aggression.