34 years after Chornobyl disaster, the Exclusion Zone is burning 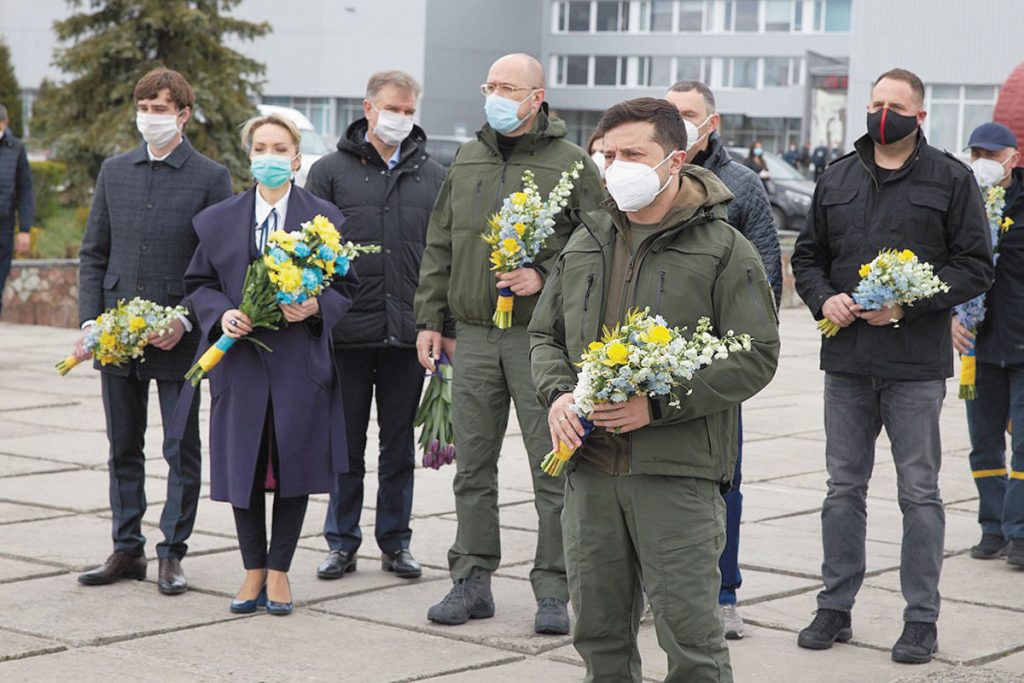 Presidential Office of Ukraine
President Volodymyr Zelenskyy and his entourage lay flowers at the monument to Chornobyl Heroes located on the territory of the Chornobyl Nuclear Power Plant.

KYIV – April 26 is a black day on Ukraine’s calendar. On that day in 1986, the worst nuclear disaster in history occurred at the Chornobyl power plant near the city of Prypiat in Kyiv Oblast. It has been approximated that 400 times more radioactive substances were released into the atmosphere after the Chornobyl accident than after the nuclear bomb was dropped on the Japanese city of Hiroshima.

This year, there were no official public commemorations due to the coronavirus quarantine restrictions. However, President Volodymyr Zelenskyy and his delegation visited the site of the nuclear accident and surrounding areas.

During the weeks leading up to the 34th anniversary of the tragedy, wildfires ravaged areas of the Chornobyl Exclusion Zone, posing a potential risk to the defunct power plant.

“Despite the quarantine, but in compliance with all requirements of personal safety, workers of the Chornobyl Nuclear Power Plant (NPP) honored the memory of the heroes of Chornobyl,” the Chornobyl NPP administration reported on its website. “On the eve of the sad anniversary, city authorities appealed to the residents of Slavutych to observe the quarantine and to remember the fallen heroes of Chornobyl not with the traditional laying of flowers, but with a candle in the window. Inhabitants of the city, including many CNPP employees, agreed, and lit candles in many windows on the evening of April 25,” the plant’s administration wrote, referring to the city built for the stricken nuclear station’s evacuated personnel.

In addition, the nuclear plant’s operational staff paid tribute to Valery Khodem­chuk, the only person who died on the night of the Chornobyl disaster and whose body remains forever buried in the rubble of the central hall. As they do every year, workers brought flowers to the commemorative plaque installed in his honor.

On April 26, President Zelenskyy, together with Prime Minister Denys Shmyhal, paid tribute to the Chornobyl liquidators. Mr. Zelenskyy laid flowers at the monument to the Chornobyl Heroes located near the power plant unit that exploded in 1986.

“The Chornobyl disaster is, without exaggeration, of a planetary scale. It has become not only a bitter lesson from the recent past but also a warning for the future. Planet Earth is a cradle and a home for all humanity. Therefore, its preservation is the responsibility of every human being and a shared duty of all nations of the world,” Mr. Zelenskyy said. The attendees honored the memory of the rescuers with a moment of silence.

The visit to Chornobyl was a part of the president’s working trip to the Kyiv region, during which Mr. Zelenskyy met with employees of the State Service for Emergency Situations. They continue to be involved in extinguishing a large-scale forest fire in the Chornobyl Exclusion Zone. He presented state awards to 22 rescuers.

Before that, the president flew via helicopter over the area damaged by the fire.

“We are grateful for your great work. Now, from the altitude of a helicopter, we have seen the true result of your work. You are heroes for us,” Mr. Zelenskyy told the emergency workers. He noted that the fire had destroyed a large area of forest – more than 11,000 hectares. “Only there, from that height, can one understand how difficult your profession is. I am grateful to you for the result on behalf of all the Ukrainian people,” the president said.

Prime Minister Denys Shmyhal also thanked the rescuers for their feat. “Addres­sing you, we extend our gratitude to all those people – today, over 1,000 people are working to eliminate the fire – to everyone who is standing with you shoulder to shoulder and doing this work,” Mr. Shmyhal said.

According to the April 26 morning report of the State Service for Emergency Situations, workers are still battling fires in the Chornobyl Exclusion Zone. On April 4, a fire had broken out; it was extinguished by Ukrainian firefighters on April 14, when rainfall helped to prevent its further spread. More than 400 people and about 100 pieces of equipment fought the fire. Three planes and three helicopters made hundreds of passes and dumped more than 460 tons of water.

A few days later, on April 18, combustion by-products several times higher than the norm, including formaldehyde, sulfur and nitrogen dioxide, were found in the air of Kyiv.

On April 22, according to the chairman of the Association of Chornobyl Tour Operators, Yaroslav Yemelyanenko, peatlands continued to burn near the Chorno­byl NPP, and three villages were burned down. Also, more than 30 percent of tourist sites have been completely lost and cannot be restored. Among them are Soviet recreation centers and villages. Mr. Yemelya­nenko predicted that the destroyed objects might be reconstructed in augmented reality (AR) mode in the future. However, the central tourist locations were not affected: the cities of Chornobyl and Chornobyl-2, as well as Prypiat.

“The main thing we can do is detect early fires with thermal imagers,” said Serhiy Kalashnyk, the head of the State Agency on Exclusion Zone Management. “We use drones here, as well as constantly organize duty shifts to respond more quickly. Equipment must be available, and water must be prepared. We need to carry out proper work in the forest, clear the wood clutter, create fire safety spacing,” Mr. Kalashnyk explained.

He spoke also about the development of the tourism potential of the Exclusion Zone and stressed that he plans to create an attractive international image of the venue. Mr. Kalashnyk noted that infrastructure needs to be improved in the Chornobyl zone to attract tourists once the quarantine is over.

Latvian Foreign Affairs Minister Edgars Rinkēvičs called the 34th anniversary of the Chornobyl disaster a reminder of the consequences of hiding the truth. “We mark the 34th anniversary of #Chernobyl [Radioactive sign] power plant disaster so well told by #ChernobylHBO, a reminder why this catastrophe happened and of consequences of not revealing the truth. Very important today as we fight another disaster. With gratitude to those who saved the world,” he wrote on Twitter.

Public awareness of the 1986 Chornobyl disaster was raised thanks to the five-episode “Chernobyl” series, created by HBO and Sky, which received three Emmy awards and was recognized as the best mini-series of 2019. Director Johan Renck and executive producer/writer Craig Mazin won awards for best director and best screenplay for a mini-series. “Chernobyl” took first place in popularity ratings on the International Movie Data Base, overtaking the well-known series “Game of Thrones.” The series was filmed in Ukraine and Lithuania.

According to the official figures, 31 people died within the first three months after the Chornobyl catastrophe in 1986. Its direct casualties include another 19 deaths that occurred from 1987 to 2004. As many as 134 Chornobyl clean-up workers suffered from acute radiation syndrome of differing severity. Official reports indicate that high levels of exposure resulted in another 4,000 deaths. According to experts, these figures are significantly lower than the actual number of victims.

An area of 160,000 square kilometers was contaminated. About 400,000 people were evacuated from the Exclusion Zone, among them 47,500 inhabitants of the town of Prypiat. Today, according to various sources, 140 settlers (known in Ukrainian as “samosely”) returned to live in the zone. Ukraine officially registers 1.9 million people as victims of the Chornobyl disaster.

On December 8, 2016, the United Nations General Assembly issued Resolution 71/125 on the persistent legacy of the Chornobyl disaster to designate April 26 as Inter­national Chornobyl Disaster Remem­brance Day. In the resolution, adopted three deca­des after the Chornobyl disaster, the General Assembly recognizes “the still-persistent serious long-term consequences thereof, as well as the continuing related needs of the affected communities and territories.”