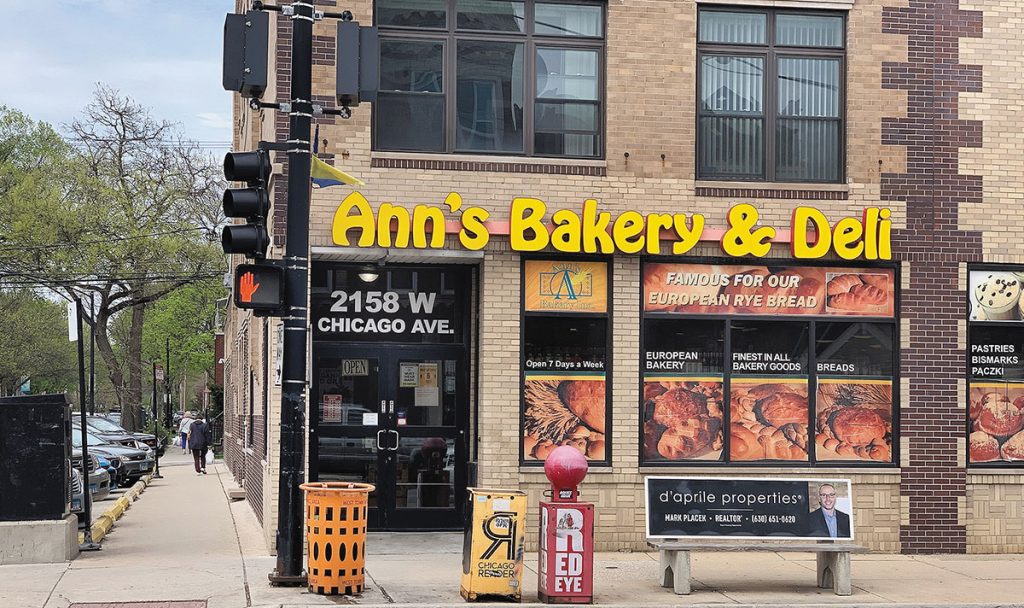 Mark Raczkiewycz
Ann’s Bakery, established more than 70 years ago, is still open and serving the Ukrainian community in Chicago’s Ukrainian Village neighborhood amid the coronavirus outbreak.

CHICAGO – Usually during this time of year, as spring gradually replaces winter, customers would be seen sipping coffee and savoring Ukrainian-inspired delectables outside the Tryzub restaurant in the Ukrainian Village neighborhood of Chicago. Offering what its owner, Myron Lewyckyj, calls “elevated Ukrainian cuisine” made from fresh ingredients brought in daily, the restaurant would by now be taking orders to host christenings and school graduation parties.

Instead, it has been closed and its 20 mostly Ukrainian employees have been laid off due to economic hardships caused by the coronavirus outbreak and related government measures.

After Illinois Gov. J.B. Pritzker imposed “stay-at-home” orders for all non-essential businesses on March 21, Mr. Lewyckyj switched to accepting take-out orders, but shuttered after one week, citing the impracticability of maintaining standards for them.

“We were barely profitable if at full capacity… it simply didn’t make economic sense because our food is handmade and too complicated to accept carry-out orders like what pizzerias do,” Mr. Lewyckyj explained, adding that the restaurant temporarily reopened and successfully sold “all-inclusive Easter baskets” over two weekends in April.

This week, Gov. Pritzker announced a five-phase plan to gradually reopen the state to alleviate the adverse economic impact the disease-related directives have had on businesses like Mr. Lewyckyj’s in the Chicagoland Ukrainian community. According to the latest available census data, more than 60,000 people in the Chicago area reported Ukrainian ancestry.

The two postal zip codes that mostly encompass the Ukrainian Village neighborhood in Chicago have 794 confirmed coronavirus cases as of May 6, according to data tracked by the CBS Chicago news channel.

Overall, Illinois has nearly 70,000 confirmed cases and more than 2,800 deaths related to COVID-19 – the pneumonic disease caused by the virus.

Infection rates and deaths have begun to flatten, so on May 5, Gov. Pritzker said the state was entering a second phase in which non-essential retail stores would reopen for curb-side pick-up and delivery in certain counties, while golf courses are allowed to open, and boating and fishing are allowed if physical distancing is practiced.

Yet, the overall stay-at-home orders remain in place until the end of the month and Illinoisans are directed to wear face coverings when outside the home.

The final phase – when large events and conventions will be allowed – won’t start until “a vaccine or highly effective treatment is available,” the governor stated at his daily briefing the same day.

Until then, churches will continue broadcasting prayer services online.

And local youth groups like Plast Ukrainian Scouting Organization and the American Ukrainian Youth Association (AUYA), both of which already cancelled organized summer camps to the disappointment of their core youth, have begun to adapt as well.

A leader of Plast in Chicago, Ms. Verschoor normally would teach classes outside her home at a park district studio, while serving private clients and helping disabled veterans and athletes gratis with methods that include meditation and breath work.

Her loss of income is compensated by the satisfaction she receives from offering online classes free.

“A yoga teacher is inherently a giver and caretaker,” she said. “I never charge [anyway]for the disabled and also have taught up to 50 people through Plast… It’s an organization that has helped me, helped me raise my children, so I wouldn’t want to charge and prefer to give back and meditate together. It’s a community.”

Currently up to 100 people attend her online classes and she gets yoga enthusiasts from as far away as Seattle and California.

As the quarantine measures get extended, Ms. Verschoor admitted “it’s getting difficult” to cope. Still, she said, “I appreciate everybody who has joined the yoga classes… it brings me as much joy as they tell me it brings them.”

Absorbed more in the complexities of the situation is Dr. Maria Dmytriv, a physician and trained public health administrator at the local Midwest Health Center outpatient clinic.

A native of Ternopil Oblast, she voiced frustration with the “confused messages I’ve received… on what to do and not to do” from government health regulators and specialists.

From “using masks or not using masks and the lack of clear guidance has created confusion and mistrust” both among health workers and community members, Dr. Dmytriv added.

The reason is that many adult Ukrainians “have a hard time trusting doctors” because of their previous experience with Ukraine’s poor health-care system. They “seek alternative treatments and advice,” especially since the White House has promoted “scientifically unproven methods” like a drug used to treat malaria called hydroxychloroquine for which Dr. Dmytriv received prescription requests.

This has compounded the problem, and Dr. Dmytriv sees “conspiracy theories” within the Ukrainian community spreading.

She voiced concern about “Russian disinformation,” citing examples of messages she has received from patients and friends who send her videos “of potential snake oil cures sourced from Russian media, all of which is untrue.”

Dr. Dmytriv said this not only causes panic, but also constitutes “fear-mongering.”

Speaking as a medical professional, she said both the local and federal government haven’t been helpful by neglecting “contact tracing and more vigorous testing” strategies, while not ensuring enough medical equipment for health-care workers.

“We have had to be creative and inventive,” Dr. Dmytriv said. “My colleagues converted a plant in Philadelphia that started to make hand sanitizers… so we’ve had to go through personal connections,” which included efforts to procure personal protective equipment (PPE).

Plast and the AUYA are also adapting.

The rotating head of the Plast’s Chicago chapter, Danylo Melnyk, said the group would normally be organizing field trips, planning summer camps and a yearly picnic in suburban Round Lake during this period. Instead, instructive courses are given online as members earn merit badges for knowledge attained and skills achieved.

The kids “want to venture outside into the wilderness, and camps are the main event for Plast – you prepare for it and it’s a culmination of scouts getting to spend time with others from other states,” Mr. Melnyk said. “Many people will be saddened about camps being cancelled… but we don’t want to endanger anyone.”

In the same situation is the AUYA, which has taken similar approaches given the fluid situation.

Some 130 kids will be deprived of camp activities at its site in Wisconsin and have participated online in the spring, making traditional Easter eggs, engaging in sports and yoga, and fund-raising for the Easter luncheon that is usually held every year.

“We’ve been trying to engage them [AUYA members] positively and are shooting for a mini-camp in August [if possible]…and having a virtual bonfire online,” said the local chapter’s president, Lilia Zaparaniuk. Virtual choir practice is planned as well.

A silver lining is that, with the closure of camps, authorized personnel will be able to do long-term repairs at the sprawling campsite, something that is usually made complicated when visitors are on site, she said.

“Not having people there allows us to work on big projects… We also have a lot of trees that have died that need to be cut down, to repair the empty hotel rooms and for minor kitchen renovations,” Ms. Zaparaniuk said.

At Plast, Mr. Melnyk said the group is also hoping for the “opportunity to hold smaller camps at the end of summer at Round Lake, depending on guidance from the governor and the Centers for Disease Control and Prevention.”

The main thing, he said, is “the well-being of neighbors, friends, and for the community to work together.” He continued: “If anybody needs anything, they should count on each other, and we work as a team.”

The same philosophy is practiced by local churches, which had garnered more than 4,000 views on YouTube during Easter, among them Ss. Volodymyr and Olha Ukrainian Catholic Church.

The pastor there, the Rev. Oleh Kryvokulsky, said, “the health and happiness of our parishioners is our main concern” as local government rules are followed along with the ones set in place by Patriarch Sviatoslav.

Funerals are conducted under strict guidelines involving 10 people at most, while other services, like baptisms and weddings, have been postponed. Confession and consultations are given over the phone and personal visits are exceptions made on a case-by-case basis, Father Kryvokulsky said.

Even essential businesses have had to scale back or adjust.

Ann’s Bakery, the go-to destination for Eastern European-style bread in the neighborhood, has imposed six-foot physical distancing at check-out, and its employees wear masks.

The Meest-Karpaty shipping service, upon which many rely to send items to relatives in Ukraine, has one person serving clients and is operating with reduced hours.

Selfreliance Federal Credit Union (SFCU), a pillar of the community that is based in Chicago and has nine other locations throughout the country, remains open – via walk-up windows, drive-throughs, its app, e-mails and phone. Thus, it continues to provide a vital service while making it safer for both employees and members.

Marketing manager Walter Tun said he has seen a spike in the credit union’s mobile application and “more than half a million Facebook users in the last two months.”

Selfreliance is a participating member of the federal government’s Payment Protection Program (PPP) related to the virus outbreak, which is providing $349 billion in forgivable government-guaranteed loans to small businesses to cover costs related to payroll and utilities, as well as mortgage and rent payments.

An article written by economists from the Federal Reserve Bank of New York reports that 25-33 percent of small businesses in Illinois are receiving PPP loans.

The credit union has about “$120 million in reserves” to absorb “any losses on loan delinquencies or abonnement on credit,” Mr. Tun said. He added that the financial institution “is stable and is no danger of any kind of quandary.”

Despite the restrictions and absence of normalcy in the business world, SFCU still has access to more than $1 million for community outreach and sponsorships, and “we’re still talking to various groups and organizations,” Mr. Tun related. “Together we could survive and flourish… we must take an active part, otherwise the community loses out.”

Meanwhile, one of the local schools of Ukrainian studies, Ridna Shkola, won’t physically hold its graduation ceremonies for the first time in the 70 years of its existence. Among Ukrainian schools, it enjoys special status because its graduating degree can be used toward college credits in social studies and knowledge of a second language, according to the Illinois Board of Education.

The school’s principal, Natalia Ponomaryova, noted that on the weekend of May 2 the school’s graduating class took its final exams online, using a two-step process whereby images associated with Ukraine were offered as the students chose random questions to answer for the final exams.

Postponing the exams as well as graduation ceremonies until September was pondered, but “by that time after the summer, they [the students]will most likely have forgotten much information,” Ms. Ponomaryova said.

The UIMA has received praise for its dynamic and relevant shows, including ones that involve non-Ukrainian artists, from local cultural and arts publications. The Third Coast Review and Chicago Cultural Alliance have in recent months recognized the UIMA for its continued devotion to the arts.

“This is great,” that the museums “are sharing their work online,” said Marta Farion, vice-president of the local chapter of the Ukrainian Congress Committee of America (UCCA). “We have organizations that have not given up on their work, the team there at UIMA have built, and created, and shared [work]on social media, which is a service to the community.”