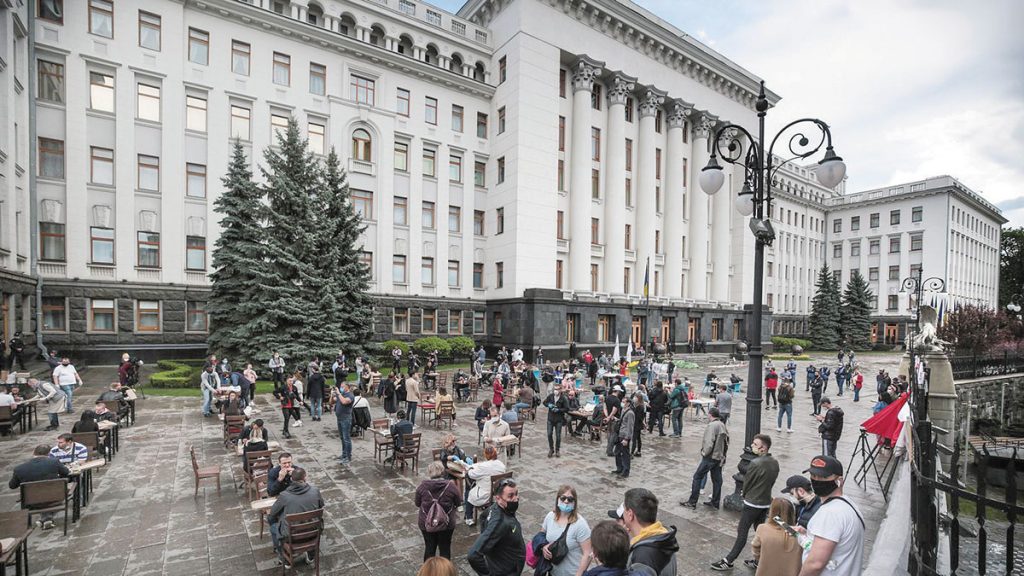 Serhii Nuzhnenko, RFE/RL
Restaurant owners created an improvised café near the Presidential Office to make their case for a reopening of their businesses.

KYIV – A series of protests against the government’s quarantine restrictions occurred in Kyiv in the first days of May. Local authorities of some Ukrainian cities also publicly confronted the central government and its decisions, while easing some restrictive measures on their own territories in contravention of Kyiv’s plan.

These developments occurred against the backdrop of tensions in society that are rising due to the substantial economic losses of small and medium businesses, which are fighting for survival and receive little help from the authorities. Meanwhile, the news media reported that the government gave preferential treatment to some large companies and a representative of the president’s team operated his restaurant in violation of quarantine restrictions.

On April 29, owners of small businesses protested outside the Cabinet of Ministers building, demanding the lifting of restrictions that prevent them from resuming economic activity. They also asked for support for small and medium businesses, and equal application of the rules for small and big companies alike.

Their protest gained even more media coverage after police officers attacked Hromadske journalists Bohdan Kutiepov and Nikita Mekenzin, who were reporting from the scene. The U.S. Embassy condemned the police’s actions, and the National Police began an internal investigation.

On May 2, some 100 owners of restaurants and small businesses gathered outside the Presidential Office and created an improvised café. They set up chairs and tables, antiseptic, plastic cutlery and meals. Tables were only for two, and there was a 1.5-meter distance between everyone. Waiters were in masks and gloves. The event was staged to demonstrate how restaurants could operate under quarantine, and organizers invited President Zelenskyy to the café. Protesters demanded that the government allow them to open up outdoor terraces for dining.

The protesters unfurled a poster calling for a “review of the velour quarantine,” thereby mentioning the recent story of the restaurant named Velour, which belongs to Mykola Tyshchenko, a national deputy from the presidential party Servant of the People. Despite the government’s ban, the restaurant served customers; however, entrance to Velour was private. Investigators from the TV program “Nashi Hroshi” (Our Money) saw National Deputy Anton Yatsenko, who is a business partner of oligarch Ihor Kolomoisky; the first deputy head of Presidential Office, Serhii Trofimov; and others entering the restaurant. When first asked, Mr. Tyshchenko said it is not his restaurant; he later announced that he is ready to pay a fine if police prove that Velour was operating.

Anatoliy Bondarenko, the mayor of Cherkasy, a city in central Ukraine, at the end of April allowed various shops to renew activity, restaurant terraces to accept clients and food markets to operate. President Zelenskyy was noticeably unhappy and promised “juridical consequences” for Mr. Bondarenko. “This will apply to all local governments’ representatives that confuse decentralization with autonomy. Do not engage in self-initiated activities that endanger the safety of people,” the president said in his video address on May 1. The same day Mayor Bondarenko was interrogated by the police.

“I would like for Ukraine to have the same laws for everyone,” Mr. Bondarenko said on May 2 in a telephone interview with Hromadske. “I do not see any difference between Epicenter [a big chain of home and gardening stores]and a small store. How is the Velour restaurant different from a small cafe? People don’t understand why they can visit supermarkets, but not markets and open-air areas that stick to hygiene standards,” added the mayor.

Mr. Bondarenko later recorded a video address to Mr. Zelenskyy. “Mr. President, I thought that, when you win, there will be laws for everyone in the country. And you know, we are ready to respond, but only after your party members,” he said in the video.

“I support the city of Cherkasy and the citizens who live there because the mayor voices the position of citizens and the opinion of citizens,” commented Andriy Sadovyi, Lviv’s mayor. “I think what came out between Cherkasy and the central authorities is bad. Somewhere miscommunication happened because, on the one hand, you can’t break the rules that exist in the country. On the other hand, it is necessary to have good communication with citizens,” stressed Mr. Sadovyi in defense of his Cherkasy counterpart.

“Very often, the mayor is on the frontline, because people come to him with all their claims, and the central government does not always hear them. When there is a pandemic in the country, everyone has to work together, because it is not possible to defeat the coronavirus in a single city,” Mr. Sadovyi added.

The Lviv mayor also spoke about policymaking at a time of quarantine in his city. “It suits us, and we are now developing regulations. We allow the operation of summer terraces from May 12. And today, together, restaurateurs are working on rules for how this will work. And then they will follow them because they decided for themselves. The same is true, for example, with hairdressers. They will work out the rules together, and then they will follow them. Only in that case will it work”, Mr. Sadovyi said of his approach.

Speaking at the Cabinet meeting on May 4, Prime Minister Shmyhal emphasized the responsibilities of local authorities. “We understand the importance of synergy with local authorities, but do not disregard the rules that apply to everyone. No quarantine exit decision can be made on a whim,” he stressed.

It has been reported that, at the time of the quarantine, 30,000 restaurants and cafes were closed and 160,000 workers were left without work. Some 12,000 of these establishments – 40 percent of the total – are now liquidated.

In recent weeks, the State Employment Service of Ukraine has been registering 5,000 to 7,000 unemployed people daily. The country now has nearly 400,000 unemployed.