Ukraine shifts towards the West in commemorating World War II 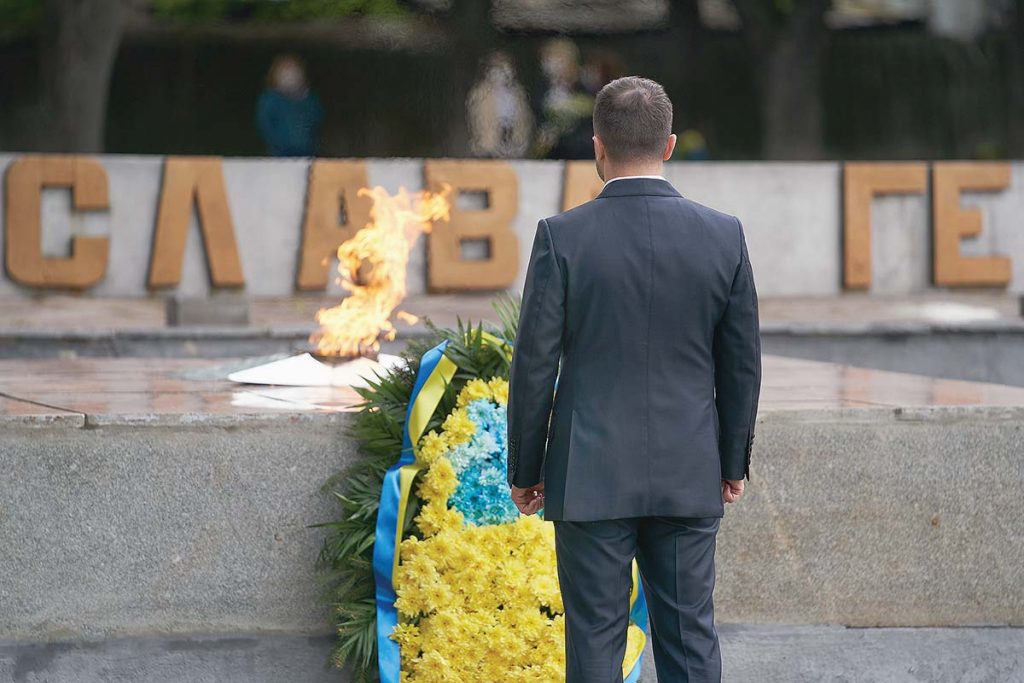 Presidential Office of Ukraine
President Volodymyr Zelenskyy lays flowers at the memorial complex “Ukraine to the Liberators,” which is located in Milove, Luhansk Oblast.

KYIV – May 9 is one of the most controversial dates in Ukraine’s modern history. For decades, Ukrainians were obliged to celebrate the Soviet holiday of Victory Day. During the first 20 years after Ukraine regained its independence, the country was an information battlefield: Russia continued spreading myths about the Red Army’s glorious victory in World War II without mentioning the secret protocols of the Molotov-Ribbentrop Pact and downplaying the roles of all Soviet republics, except Russia.

Creating a celebration on an occasion when the rest of the world mourned and remembered was powerful propaganda that polarized Ukrainians no less than the issues of language or religious denomination. The difference in approaches to World War II can be compared by looking at the mottos used in the West on May 8 and in Moscow on May 9: “Never again” as opposed to “We can do it again.”

After the Revolution of Dignity and the beginning of the Russian invasion of Crimea and the Donbas, Ukraine began confidently leaning toward the European approach to history, and May 8 became a National Day of Remembrance and Reconciliation.

Still, some people celebrate May 9 even after the traditional attributes of this day – the hammer-and-sickle emblem of the USSR, the Red Army Star, the St. George Ribbon – were officially forbidden in Ukraine as Soviet symbols. Every year, people gathered at memorials are fined for wearing the outlawed symbols.

The transition from celebrating to remembering has not yet been completed. President Volodymyr Zelenskyy addressed the nation on both days.

On May 8, Mr. Zelenskyy went on a working trip to the Luhansk region. He visited the settlement of Milove, which is divided by the border between Ukraine and Russia, where he visited the memorial complex named “Ukraine to the Liberators.”

Mr. Zelenskyy honored the memory of those killed in World War II and laid flowers near the Eternal Flame. He presented the “Never again” message at a place where “again” happened six years ago.

“On this day, Ukraine, together with the whole civilized world, says: Never again. Today these are the two most important words for the history of mankind and its future. And they can’t just become a formality,” he said in his address in Milove.

During his working trip to Luhansk Oblast, Mr. Zelenskyy also visited Zolote in the Popasna district. The president spoke there with families of internally displaced persons.

“Here, in December 1942, the expulsion of Hitler’s invaders from the Ukrainian land began,” said Mr. Zelenskyy in his address (an English translation of which was posted on the official website of Ukraine’s president). “It was still a long way to the end of the war. But our grandparents from every corner of the country fought against Nazism, defended their homeland, died for the homeland and won for us. Today, our courageous boys and girls defend the Ukrainian state, our sovereignty and territorial integrity. For the sake of peace we so desperately need. For the sake of prosperity of independent Ukraine. For the sake of future generations. …And in this place, we will soon restore the symbol of our remembrance,” President Zelenskyy stated.

Commemoration at the United Nations

The United Nations Security Council, chaired by Estonia, held a meeting on May 8 to mark the 75th anniversary of the end of World War II in Europe. The goal was to remember the tragic pages of the past and make sure that such a tragedy does not ever happen again. The format of the meeting allowed not only members of the Security Council but representatives of other U.N. member states to take part in the discussion. In total, about 70 participants took part, including 50 foreign affairs ministers – a large number considering the quarantine in effect around the globe. Due to COVID-19, the Security Council meeting was moved to Tallinn via the Hybridity virtual platform.

Both 75 years ago and today, Ukraine experienced the consequences of aggression by a foreign invader – a salient fact that was pointed out by Ukraine’s foreign affairs minister, Dmytro Kuleba.

“Ukraine is one of the countries that suffered the most during the greatest tragedy of the 20th century – World War II – which brought unspeakable human suffering and horrors of the Holocaust to Europe,” Minister Kuleba said during the U.N. meeting. “Even conservative estimates put the number of my perished compatriots at 8.5 million. Over 7 million Ukrainians fought against Nazism in seven armies – in the Red Army, in the Ukrainian Insurgent Army, in the Polish, French, British, Canadian and U.S. armed forces.”

“Alas, for some, including one of the U.N. Security Council’s permanent members, this commitment does not mean very much,” Mr. Kuleba continued. “The Russian aggression against Ukraine, which led to the illegal occupation of Crimea and parts of the Donbas, has already lasted longer than the Second World War. It resulted in over 13,000 people killed and more than 27,000 wounded in the very heart of Europe.”

“This week [May 4-10], 17 Ukrainian soldiers were wounded in action at the frontline of the ongoing Russian aggression in the Donbas. Luckily, no one was killed in action this week. In these days, when we commemorate the tragedy of World War II, let us not forget the ongoing war in Europe,” Mr. Kuleba wrote on Twitter.

According to Ukraine’s National Police, various events took place on May 9 in Kyiv without significant violations of law and order.

“During events in the Park of Eternal Glory at specially established checkpoints, police officers conducted a cursory inspection to identify prohibited items in [the possession of]persons who came to lay flowers at the memorial,” stated the press service of the Ministry of Internal Affairs.

The head of the National Police reported that 495 events took place throughout the country on May 9 with the participation of almost 9,000 people. Police received more than 90 reports of possible violations; four criminal proceedings were opened and 20 administrative protocols were drawn up.

“In order to prevent the spread of the coronavirus, the capital’s rescuers carried out disinfection every hour on the Alley of Heroes of Kruty and in the Park of Eternal Glory,” a release from the Internal Affairs Ministry noted. “However, despite numerous warnings, some citizens still violated current decommunization legislation and established quarantine rules.”

In other cities, people refrained from holding mass gatherings. For example, in Kharkiv, instead of mass events on May 8, a festive online concert called “Memory in Our Hearts” was held. Earlier, Kharkiv Mayor Hennadiy Kernes had called on the city’s residents to join the action “Immortal Victory Regiment” (a Russian propaganda campaign) without leaving home. “I urge you on May 9, at exactly noon, to go out on your balconies with photos of your grandfathers and great-grandfathers and hold a citywide minute of silence, memory and gratitude for their heroic act,” Mr. Kernes said.

In the city of Dnipro, the situation was similar. Mayor Borys Filatov said the May 9 holiday would be celebrated online. Furthermore, he urged Dnipro citizens to take part in a flash mob similar to the one in Kharkiv. Mr. Filatov himself posted on his Facebook page a few days before May 9 that he was walking between blocks of flats and shouting congratulations toward the windows of World War II veterans.

On May 9, President Zelenskyy visited the Hill of Glory memorial complex in the Zakarpattia region, where the graves of soldiers who died in the battles for the liberation of Ukraine from the Nazi invaders are located.

“In Zakarpattia, the expulsion of the invaders ended. We will never forget the terrible price of this victory. The main thing to honor the feat of everyone who brought this victory closer is not loudness, but sincerity. And our victory is in everyone’s heart,” Mr. Zelenskyy said.

The president announced a memorial project that will install four bells in four corners of Ukraine as symbols of remembrance, victory, peace and unity.

“We defeated Nazism 75 years ago. It took another 46 years for us to gain an independent Ukrainian state. And today, for the sixth year in a row, we are defending it. These are all pages of our history that unite and make us stronger. Today, with faith in our goal, I am announcing a project of memorial symbols. We want to install four bells in Ukraine,” the president stated in his address.

The president said: “We believe and will do our best to make sure that the day comes when two more bells are placed: the Peace Bell in Donetsk and the Unity Bell in Symferopol. And at the moment when peace comes in Ukraine – and we return our people and our land – four bells will simultaneously announce this significant event in the history of Ukraine. And each of them will engrave in our mind: ‘Let us remember that unity is the key to our peace and our victory.’”