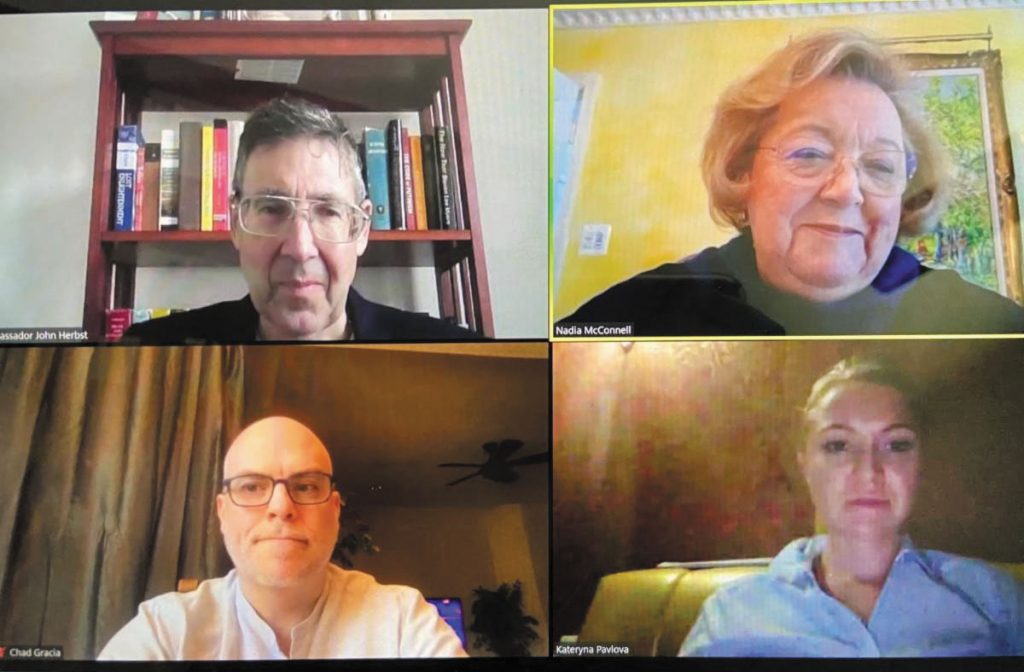 USUF
Participants of the U.S.-Ukraine Foundation’s discussion about the film “The Russian Woodpecker” and the Chornobyl nuclear disaster of 1986 (clockwise from top left): Ambassador John Herbst, Nadia McConnell, Kateryna Pavlova and Chad Gracia.

WASHINGTON – The U.S.-Ukraine Found­ation (USUF) on April 24 hosted an online streaming event featuring the film “The Russian Woodpecker.” The panelists for the webinar were Chad Gracia (the film’s author, producer and director), Nadia K. McConnell (president of the U.S.-Ukraine Foundation), Ambassador John Herbst (director of the Atlantic Council’s Eurasia’s Center), and Kateryna Pavlova (head of the Department for International and Public Relations at the State Agency of Ukraine for Management of the Chornobyl Exclusion Zone).

They discussed the significance and relevance of the film vis-à-vis today’s realities, including the Soviet government’s reaction to the Chornobyl nuclear disaster of 1986 and the consequences Ukrainians and people all over the world faced as a result of the tragedy. They also drew parallels between the lack of transparency on the part of the Soviet government regarding the Chornobyl catastrophe and the situation with the Coronavirus pandemic that is taking so many lives today.

“The Russian Woodpecker” won the World Cinema Documentary Grand Jury Prize at the 2015 Sundance Film Festival  and the Best Cinematography Award at the 31st International Documentary Associa­tion Awards Presentation of 2015. The film depicts the life of Ukrainian artist Fedor, who was a child at the time of the Chornobyl explosion 34 years ago. This tragic accident changed millions of people’s lives, including Fedor’s. He was traumatized by the ordeal and as an adult decided to conduct his own investigation of the Chornobyl nuclear power station’s explosion.

The film casts light on the overall environment and daily routine of citizens who lived at that time, showing how the government failed to protect them from the radiation and subsequently hid almost all data from the archives. The main character encourages Ukrainians to seek the truth and to abandon the ghosts of the past in order to make Ukraine a dignified place to live.

The webinar began with remarks from Ms. McConnell regarding the 34th anniversary of the Chornobyl catastrophe. She stressed that it was crucial to remember, because many people in Ukraine are still facing the consequences of the disaster. Ms. McConnell noted that “The Russian Woodpecker” is a story of how that event changed and impacted the main character and his family, rather than just another documentary about Chornobyl.

Following the showing of the film, Mr. Gracia, the film’s author, producer and director, explained that his meeting Fedor was one of the luckiest encounters of his life. Mr. Garcia was in Kyiv, working on a theater production when he met Fedor, who was burning with passion to reveal to the world a theory about the cause of the Chornobyl explosion. Eventually, Mr. Gracia agreed to spend a weekend in Chornobyl with a camera to let Fedor present his conspiracy theory.

But the main focus for Mr. Gracia was not the conspiracy theory. Instead, he wanted to capture why Fedor was passionate about this disaster and what it meant to him, his family and people in Ukraine. That is how the “The Russian Woodpecker” was created. The film started with Fedor’s Chornobyl conspiracy theory and finished with the events of the Euro-Maidan Revolution of Dignity, before the main acts of violence began. It exposes how generations of Ukrainians have lived in fear under Soviet Russian rule.

Mr. Gracia added that he could see so many nuances and reflections in the current coronavirus situation: people in gas masks, invisible enemies, viruses, and so on.

Recently, there were wildfires in the Chornobyl area, which alarmed not only Ukrainians but people all over the world. Ms. Pavlova shared that, unfortunately, Ukraine was unprepared to react quickly and proactively to solve this problem, since there was no national plan to deal with it. She said it might have been triggered by global warming, a fire-susceptible environment in the zone, or authorities slacking off on prevention measures. Ms. Pavlova added that the fire came from the neighboring territories, not from inside the Chornobyl zone.

Ms. Pavlova also said that it was emotionally hard for her to watch “The Russian Woodpecker,” because she considers herself a devoted patriot and took everything close to heart. She added that she would like HBO to expand on its award-winning mini-series “Chernobyl” in order to share more details about the disaster and more stories about the victims.

Regarding the Soviet government’s reaction, lack of transparency and disinformation after the Chornobyl catastrophe, Ambassador Herbst said that children and youths were allowed to participate in the May Day parade right after the explosion of the nuclear reactor. Nowadays, at least the Russian authorities are more open about the coronavirus pandemic, he said. Vladimir Putin admitted how dangerous this crisis is, Ambassador Herbst noted, even though the Russian authorities still spread misinformation, trying to find a scapegoat and distort facts.

Besides the deadly incompetence of Soviet leaders’ response to Chornobyl, Ms. McConnell noted that international donors that pledged help did not meet their goals. Ms. Pavlova mentioned that there were still many international funds that provide much-needed financial assistance to manage the Exclusion Zone. She also pointed out that Chornobyl today is also a popular spot for foreign tourists. During the last four years, the State Agency of Ukraine for Management of the Exclusion Zone revamped its website and created a Facebook page with daily announcements; it sustains a large natural reserve for wild animals.

Mr. Gracia also shared his experience regarding the premier of “The Russian Woodpecker” before Russian audiences in Moscow and St. Petersburg in 2015-2016, noting that the film had a very positive response from viewers there as well. He emphasized that the movie was not meant to be anti-Russian but, rather, a critique of the Soviet system. People from Ukraine, Russia and Belarus suffered from Chornobyl’s radiation.

Ms. McConnell summarized that there should be more films like “The Russian Woodpecker,” depicting Ukraine as an independent and united nation, showcasing its rich history and culture, and people who never cease to seek truth and peace.