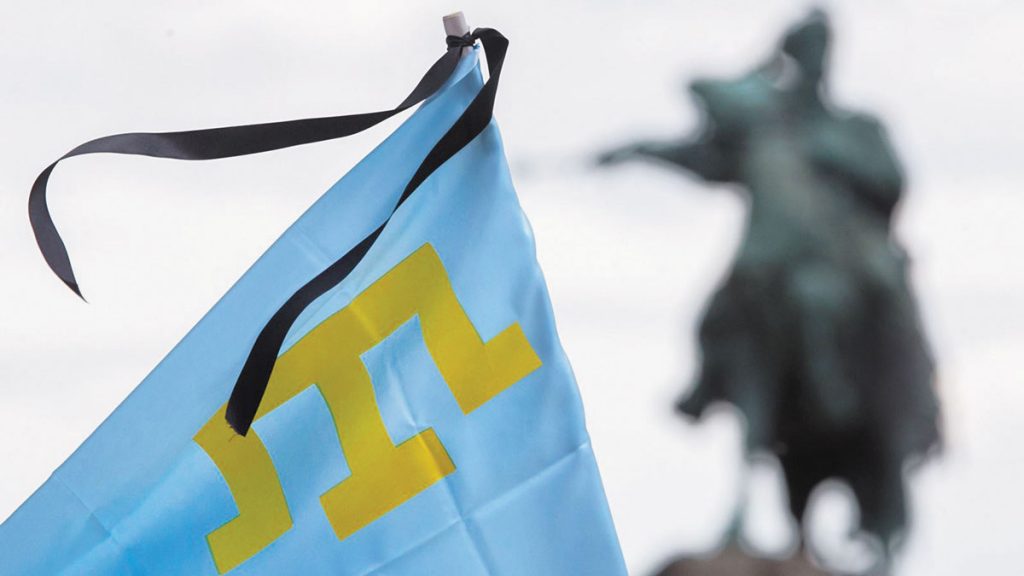 Presidential Office
The Crimean Tatar flag with a black mourning ribbon is displayed in Kyiv.

KYIV – On May 18, Ukraine remembered the victims of Joseph Stalin’s genocidal deportation of the Crimean Tatar people from Crimea. On that day in 1944, the first trainloads of Crimean Tatars were forcibly resettled from the peninsula to Central Asia and Siberia. In total, about 200,000 people were deported via cattle cars by the Stalin regime. Thousands died en route, and tens of thousands more died due to the harsh conditions of exile.

In 2015, the Verkhovna Rada of Ukraine had declared May 18 as the annual Day of Remembrance of the Victims of the Crimean Tatar Genocide.

The Mejlis, the highest executive-representative body of the Crimean Tatars, called for raising the Crimean Tatar flag with a mourning ribbon and urged the public to light candles in their windows on the night of May 17-18.

President Volodymyr Zelenskyy addressed the nation on May 18. “We believe that the day will surely come when Crimea will return to Ukraine,” he said. “Crimean Tatars and Ukrainians will return to their native homes, gather at the same table to say together: “Bizim ve siziñ azatlığıñız içün! For your and our freedom!”

On the night of May 17-18, a light projection of Crimean Tatar and Ukrainian flags was placed on the Presidential Office building, symbolizing the solidarity between the Ukrainian and Crimean Tatar peoples.

The president noted that Ukrainian children must know about this tragic page of history. That is why the educational project Nationwide School Online broadcasts lessons on the deportation of the Crimean Tatars. “We want to build a state in which everyone feels like a citizen of Ukraine. I want everyone to feel like a full-fledged citizen – not forgetting their people’s history and traditions. We want to support you not only in words but also in actions at the legislative level,” Mr. Zelenskyy told the Crimean Tatar representatives.

Mr. Zelenskyy said that, in the coming days, he plans to sign a decree declaring the Muslim celebrations of Eid al-Adha and Eid al-Fitr as state religious holidays. He also noted that the Crimean Tatar people should be represented at the highest diplomatic level, therefore, he approved Emine Dzhaparova for the post of first deputy minister of foreign affairs.

To resolve the Crimean Tatar people’s problematic issues, Mr. Zelenskyy initiated the creation of a working group in the Presidential Office that will include Crimean Tatars. Also, a large new mosque is planned in Kyiv. The president explained that he is waiting for this mosque’s project from the Crimean Tatars and is ready to support it.

A large hub will also be built on the border of the Kherson region and the Autonomous Republic of Crimea to make crossing the checkpoint between the two regions more comfortable for those entering Ukrainian-controlled territory. “So that those people, who live in the temporarily occupied territory of Crimea, can see how we treat the Crimean people, the Crimean Tatars. For them to come and see a different look, a showcase of our country,” Mr. Zelenskyy explained.

“We are very grateful that today the 76th anniversary is celebrated at such a level; installations with the Crimean Tatar flag will be seen on the premises of the Cabinet of Ministers and on the building of the Presidential Office,” said the leader of the Crimean Tatar people Mustafa Dzhemilev.

“We hope that the topic of Crimea, the topic of returning to Ukraine and restoring the territorial integrity of Ukraine will never disappear from the agenda of the leadership of our state,” Mr. Dzhemilev underscored.

On the 76th anniversary of the Crimean Tatars’ deportation, the foreign affairs ministers of Ukraine, Estonia, Georgia, Latvia, Lithuania and Poland published a joint statement.

“Just in the first years of exile, almost half of all deported Crimean Tatars died. The period of the ban on return to the homeland, to Crimea, lasted until 1989 and was accompanied by purposeful linguistic and cultural assimilation,” the statement reads. “The tragedy of the Crimean Tatar people repeated in 2014 when the Russian Federation seized and illegally attempted to annex Crimea, an integral part of Ukraine. It is no coincidence that Russia, which glorifies Stalin’s totalitarian regime, continues its criminal policy in the 21st century in the temporarily occupied Crimea: ban [on]the Mejlis of the Crimean Tatar People, systemic repressions, persecution and violations of the rights of Crimean Tatars, who opposed Russia’s armed aggression against the territorial integrity of Ukraine. It forced thousands of Crimean Tatars, indigenous people of Crimea, to leave their homes and move to mainland Ukraine.”

The six countries condemned Russia’s aggressive policy towards Ukraine and new repressions against the Crimean Tatar people. Their statement demanded that Russia stop violating fundamental principles of international law, fully implement United Nations General Assembly resolutions, and comply with the calls of the international community regarding the de-occupation of the Autonomous Republic of Crimea and the city of Sevastopol.

“Whatever attempts Russia undertakes to legitimize its occupation of the peninsula, the fact remains undisputed: Crimea is Ukraine,” the foreign Affairs ministers emphasized.

The European Union also has called on the Russian Federation to stop human rights violations in Crimea. “Today we remember the Soviet deportation of Crimean Tatars from their homeland. We remember all who suffered. The EU calls on Russia to put an end to the human rights violations in Crimea and does not recognize the illegal annexation of the peninsula by Russia,” reads the statement released by the Delegation of the European Union to Ukraine.

According to the Deputy Prosecutor General of Ukraine Gunduz Mammadov, since 2014 the persecution of the Crimean Tatar people on religious grounds, as well as in connection with opposition to the peninsula’s annexation, has resumed in Crimea. “Intolerable living conditions, numerous illegal searches, detentions, imprisonment are forcing the indigenous people of the peninsula to leave Crimea,” he said.

Canada calls on Russia to cancel its ban on activities of the Mejlis of the Crimean Tatar people, said Minister of Foreign Affairs Francois-Philippe Champagne. He added that Canada will always stand up for Ukraine’s sovereignty and territorial integrity.

“Canada stands with the Crimean Tatar people in honoring the memory of those killed and all who suffered. Canada continues to be concerned by the ongoing human rights violations committed against Crimean Tatars in the Crimean peninsula under Russian occupation, including the banning of the Mejlis – the self-governing body of the Crimean Tatars. We call on Russia to reverse this decision. Canada will always stand up for Ukraine’s sovereignty and territorial integrity,” he said in a statement.

“Canada does not forget this tragedy and the suffering endured by the hundreds of thousands of children, women and men forcibly deported from their ancestral homeland,” he said.

Singer Jamala, who is of Crimean Tatar origin, wrote on Facebook: “On the morning of May 18, my great-grandmother Nazilkhan and her five young children were put in freight cars and sent to Central Asia. They drove in terrible conditions for almost two weeks. The youngest child, a daughter, unfortunately, died on the way. The girl was not allowed to be buried. Soviet soldiers took her from her mother.”

A few days before that, on May 14, marked the fourth anniversary of Ukraine’s victory at the Eurovision song contest, where Jamala performed the song “1944” in memory of the Crimean Tatar genocide.

“I was lucky, I knew my great-grandmother, I talked to her as a child,” Jamala noted on Facebook. “Although I was too young to ask more. But I remember my grandparents telling me the story that day. So that my sister and I can know and remember. The least we can do is remember.”