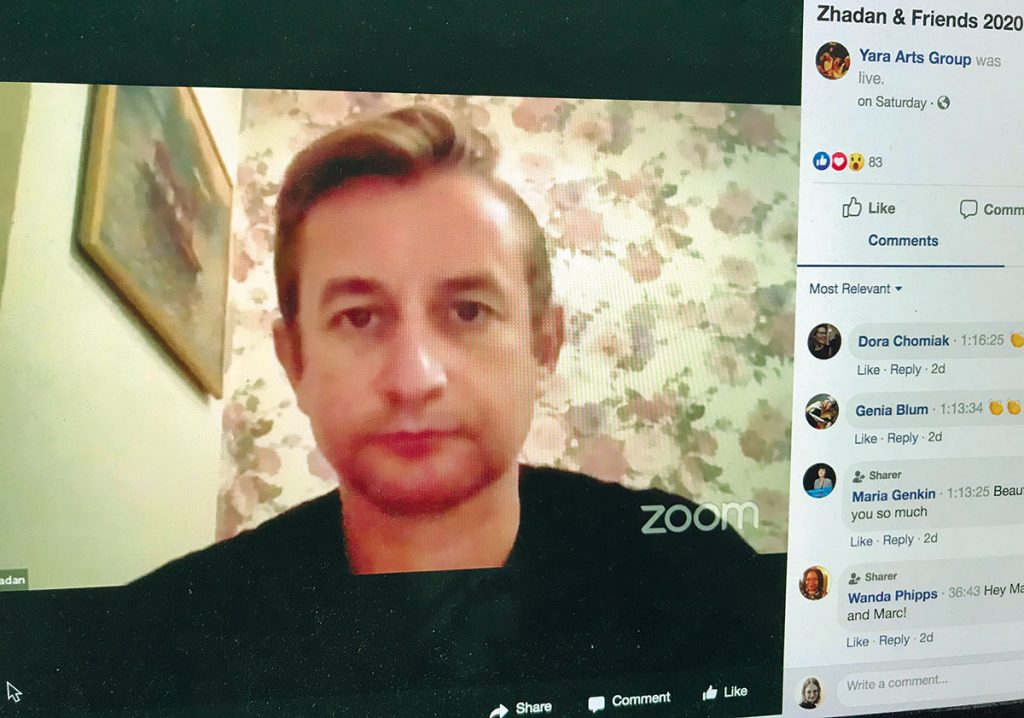 NEW YORK – Like many arts organizations, Yara Arts Group is going virtual during the pandemic, taking the opportunity to involve artists in other parts of the world. On April 24 and 25, Yara had its first virtual events with well-known Ukrainian poet Serhiy Zhadan, live from outside of Kharkiv. The events were hosted by Virlana Tkacz with technical assistance by Darien Fiorino.

The first event, “Zhadan and Friends: Poetry,” featured poets responding to Mr. Zhadan’s work with their own poetry and Julian Kytasty responding on the bandura. The poets were Dzvinia Orlowsky, Isaac Stackhouse Wheeler, Wanda Phipps and this writer. Yara Arts succeeded in drawing a virtual crowd. The event on Zoom by invitation and on Facebook live had over 1,000 views.

In 2019, Virlana Tkacz and Wanda Phipps released their book of selected translations of Mr. Zhadan’s poems, “What We Live For, What We Die For” (Yale University Press.) That year, Yara events were based on the book.

For these virtual events, Ms. Tkacz and Ms. Phipps translated a new body of poems. They started their new translations with poems from the collections “Antenna” and “List of Ships,” the latter of which was published just last week in Ukraine.

The jazz event began with a reading by Mr. Holman of an essay written by Mr. Zhadan called “Phonebook of the Dead,” which serves as an introduction to his poems. From this essay, we learn that Mr. Zhadan’s father has recently died causing the writer to take a journey through the landscape of memory. He writes about diary entries and bad photos; both help him to remember. He finds his father was someone he didn’t know; he “wrote about all of us in his odd handwriting, the handwriting of somebody we didn’t know.” Later, Mr. Zhadan calls to the places in his landscape that evoke memory, “book of trees,” “book of stones,” and “book of trampled soccer fields.”

He also sets a tone for us to consider what writing is, comparing it to nature: “Writing is like a river. Wading into the water, not everyone looks at ease.” Jazz musician Mr. Coleman emphasized these lines with his piano playing, which perfectly complemented Mr. Holman’s reading.

Actors Sean Eden, Chris Ignacio, Maria Pleshkevich, Darien Fiorino and Maksym Lozynsky read from New York’s East Village to San Francisco. They all did justice to Mr. Zhadan’s work, but Mr. Zhadan most carefully recited the words that are close to his heart. Mr. Coleman continued to play through their readings. Mr. Zhadan’s laid-back nature created a sense of comfort, like the piano playing.

In one of the favorite poems, “I Imagine How a Bird Sees This,” read by Mr. Fiorino in English translation and Mr. Zhadan in the Ukrainian original, Mr. Zhadan writes about the “discarded pages on the streets” making another comment about writing, what is given away and becomes part of nature. Later in the show, we learn about the sun like scripture, a beautiful combination of nature and writing.

Mr. Zhadan read from his most recent poems called “Psalm of Aviation.” This is another instance in which he speaks of writing in the poem: “There were words.” “There were words I said about people and their stories.”

The end of the event was a special treat in that Mr. Zhadan read from another book, the most recent, in progress with the accompaniment of Ms. Chupakhin on piano.

This event was a homage to the words used to express death and other emotions. The event will linger in my memory, perfect in a time when the pandemic might occupy most of our thoughts. Yara Arts, as always, is doing a great job creating a diverse community, even during a time of social distancing.

The recorded events can be accessed on Yara’s website: yaraartsgroup.net.