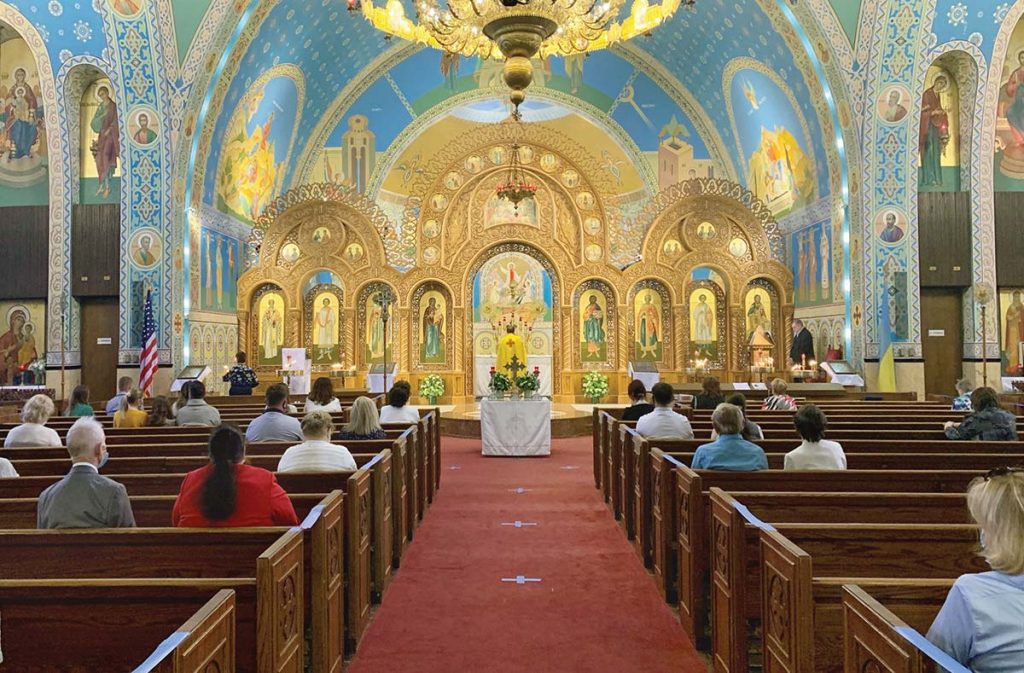 Mark Raczkiewicz
A maximum of 50 people were allowed to attend two morning liturgies at Ss. Volodymyr and Olha Ukrainian Catholic Church on June 14 as per city and state guidelines.

CHICAGO – Tears began running down the faces of parishioners at the Saints Volodymyr and Olha Ukrainian Catholic Church’s early morning liturgy on June 14.

They hadn’t had the chance to pray as a congregation for more than two months, including on Easter, and were limited to attending services virtually amid a coronavirus pandemic that has disrupted the economy and social routines of the country’s third most populous city.

The usual second or mid-morning Sunday service wasn’t held to allow for all surfaces of the church to be disinfected and what would’ve been the third liturgy of the day took place at the customary time, close to noon.

Two bottles of hand sanitizer stood on a table in the foyer. The enclosed, soundproof children’s room was closed and the service took place without a choir. Confession was administered on stairwells to allow for physical distancing, and the centrally placed icon and cross in between the columns of pews were removed to prevent church-goers from kissing common surfaces.

“This was our first day of reopening, so we’re in trial mode,” said parishioner Olga Bozio. “Even the after-mass coffee and sandwiches in the church basement won’t be offered, and all the exits will be opened for people to leave without having to bunch up together.”

As per the city’s third of five phases for emerging from the nearly three-month lockdown, 50 church-goers were allowed inside, although places of worship are allowed to be filled at 25-percent capacity, which would’ve allowed for up to 125 people to attend at Ss. Volodymyr and Olha.

Holy communion was administered with what appeared to be a common golden spoon. The chalice’s contents were being deposited in a contactless manner without touching lips or mouths. If contact was made, there were extra spoons nearby and disinfectant for any used spoons.

The coronavirus, according to the CDC, is known to spread through droplets that are expelled through mouths and nasal passageways, among other ways of transmission.

The pastor wasn’t wearing a mask, like his counterparts in Ukraine do, and he didn’t opt for disposable wooden spoons that were later burned as was done, for example, at a counterpart parish, St. Joseph the Betrothed Ukrainian Catholic Church on the northwest side of Chicago, or in some churches in Canada.

“It’s good to see everyone in person and not virtually,” said Pastor Oleh Kryvokulsky, adding that daily prayer services would resume on June 15. “Your safety is our number one priority.”

As prayers blared from outdoor speakers for those who couldn’t enter, Ms. Bozio said that, given the tight-knit nature of Chicago’s Ukrainian community, it was “exciting to be back at church… not only to pray but to get together and socialize.”

Chicago’s gradual reopening is based on rules set by the state government that follow guidelines from the Centers for Disease Control and Prevention (CDC).

Accordingly, certain non-essential businesses were allowed to reopen on May 30, including hair salons and food establishments – now able to offer outdoor dining in addition to delivery and curb-side pickup. Yet, area commerce didn’t reopen until earlier this month due to unclear guidelines from the municipal government.

“Social distancing ambassadors” were deployed “to manage the flow of patrons,” according to the municipal body’s June 8 statement.

On a visit four days later, The Ukrainian Weekly saw children on swings, people playing softball and tennis, as well as others relaxing on the expansive lawn.

Chicago has nearly 50,000 confirmed cases and 2,427 deaths related to COVID-19, the disease caused by the novel coronavirus, the city government said on June 17.

The two zip codes that mostly encompass the Ukrainian Village neighborhood had 1,200 confirmed cases as of June 17, according to the local TV affiliate of CBS.

Hair salon owner Tetiana Patryshevska, whose business on Chicago Avenue was shuttered for 75 days, said she sees customers “come in one after the other.”

Typical of a small business owner, she told The Weekly that, since emigrating from Ukraine 26 years ago, she has not more than 10 vacation days in any given year and wasn’t accustomed to not working.

Now, Ms. Patryshevska said, with so much work, my knees hurt and I’m exhausted when I get home.”

During the lockdown, she said her routine was “[opening]the refrigerator and watching television… and when it got warmer I finally went for walks.” She added that if the shelter-in-place orders had lasted longer, “I would’ve died of hunger… the $1,200 [federal]aid check wasn’t enough.”

Similarly, at Celebrity Lashes, which offers haircuts, facials, eyebrow and eyelash services, owner Valentyna Parashchak said she was glad to reopen her business.

A mother of two children, she said she could have deferred her lease payments until July 1 but managed to pay during the quarantine, adding that “we prepared ahead of time, bought masks… and remained closed from March 21 until June 3.”

Because disinfecting the salon is time-consuming, Ms. Parashchak said business hours have been reduced. A backlog of one month exists for eyelash treatment and there is a one-week waiting list for haircuts.

“I expect to make the money I lost [during the lockdown]in two to three months… I now value working more than ever,” she said.

Before the lockdown in mid-March, Ms. Fedus, an immigrant from Ternopil, said “all was going well in terms of planning and my family… then the pandemic hit.”

First, there was a fear “for my family’s health and the future of the business,” which relies on catering events as its main cash cow rather than indoor dining inside the café’s small premises. But, “I overcame the fear,” she said, adding, “I stopped living in the future and started to live in the present.”

“We survived,” she said, while mentioning that orders are picking up and that she was trying to be “responsible as much as possible to not make any sanitation mistakes” for the outdoor patio she opened on June 13 because she doesn’t want to “risk the lives of customers and employees.”

Dr. Allison Arwady, head of the Chicago Department of Public Health, said last week that Chicago could move to phase four as early as July 1 if coronavirus figures stay low or continue declining.

This would see gyms, museums and indoor dining return, and people would be able to gather in groups of up to 50.

Bars that serve food opened on June 17 for indoor seating, and the City Council approved a measure on the same day to allow purveyors of alcohol to sell cocktails to go.

The Ukrainian restaurant Tryzub has restarted food delivery after the looting that also hit the community earlier this month following the killing of a Black suspect, George Floyd, by a white police officer in Minneapolis.

Owner Myron Lewyckyj said he has plans to open his patio next week with a “reconfigured menu with an emphasis on seasonal ingredients but not as expansive” as before.

Even for essential businesses that were allowed to stay open, like the Amish & Healthy Food grocery, times were tough and still are.

Owner Oleksandr Firov, originally from rural Zhytomyr Oblast in Ukraine, said his client base is only slowly coming back.

When the pandemic struck the city, he closed for three days “out of fear,” but then reopened to witness “panic buying.”

He even had trouble placing orders with his suppliers at Amish farms in neighboring Indiana and further in Michigan, where he goes once a week for pick-ups, because local residents there “were panic buying” as well.

Even during his latest run on June 16, Mr. Firov said he had planned to buy 12 crates of strawberries only to purchase two.

In addition, he noticed that “customers have temporarily moved away either to shelter elsewhere in less populated areas or to their summer homes.”