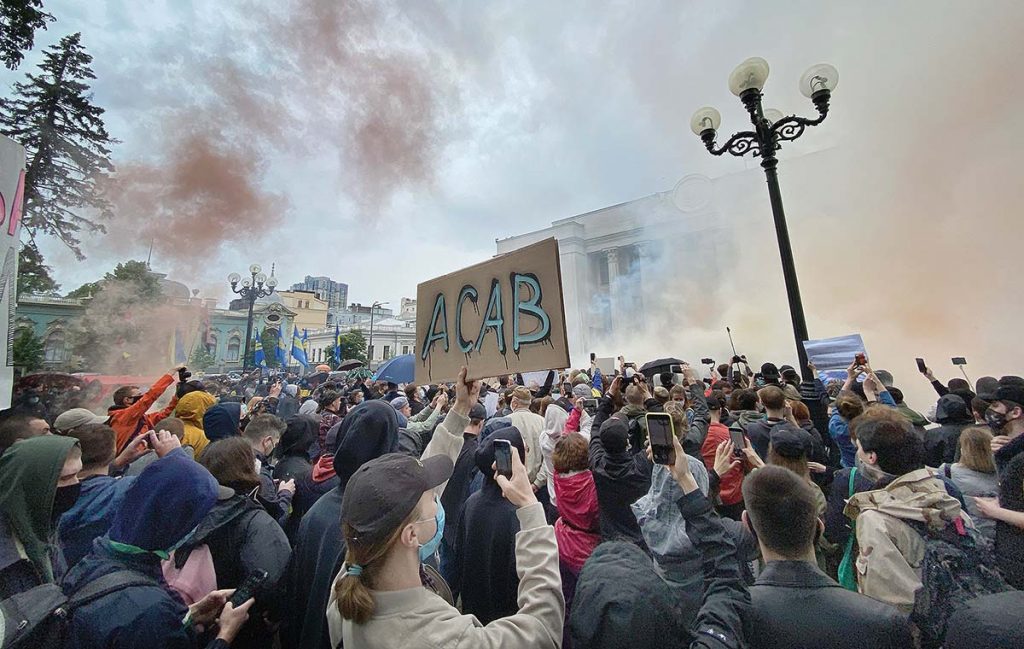 KYIV – Fifty-five national deputies on June 5 initiated a move to dismiss the minister of internal affairs, Arsen Avakov. Thirty-six deputies from the Servant of the People faction, 18 from Holos, and one from European Solidarity signed a statement and transmitted it to the Verkhovna Rada’s Secretariat.

To act on the initiative, Parliament needs four times as many votes, so this initiative by 55 national deputies has more of an informational impact. An actual dismissal of the powerful and controversial minister who has served under two presidents is unlikely.

At the same time, Internal Affairs Minister Avakov was summoned to the Verkhovna Rada for a report and a question and answer session with national deputies. The immediate cause was an incident in the town of Kaharlyk, near Kyiv, that happened on May 24. It was but the most recent incident in a chain of events involving police officers that point to the failure of police reform in Ukraine.

Two police officers were detained in the Kyiv region on suspicion of rape and beating, the State Bureau of Investigation (SBI) reported. “According to preliminary information, on the night of May 23-24, a police officer in his office tortured a woman who was summoned to the police station as a witness – put a gas mask on her, handcuffed her and fired a firearm over her head. After that, he raped the victim several times,” the SBI said. Also according to the report, law enforcement officers used physical force against a man who was in the police station at the same time and threatened him with rape.

The incident at the police station became known when the 26-year-old woman went to the hospital with injuries and blamed the police. After the SBI announcement, the suspects in the crime were dismissed, the unit was disbanded, and all personnel are set to be re-certified. New management has already been sent to the department.

Another troubling aspect of the Kaharlyk incident is that none of the police officers present in the police station did anything to stop the assault; they just ignored the woman’s shouting and screams. Civil society activists, some national deputies and experts link this behavior with “police solidarity” and the incomplete and flawed police reform that has been carried out in Ukraine since 2014.

There had been a proposal to carry out comprehensive reform of all law enforcement bodies with continuous re-certification of all their employees. Instead, this concept was abandoned in Ukraine, and the so-called “Georgian version” of rapid reforms was undertaken in response to public demand and the political will for fast change.

At that time, Ukraine’s first deputy minister of internal affairs was a young Georgian reformer, Eka Zguladze; she was joined by her colleague Khatia Dekanoidze, who headed the National Police of Ukraine in 2015-2016. The reform was merely structural: departments were divided and renamed; a new patrol police force was recruited, of which only 20 percent now remain; and a hasty re-certification was carried out, leaving in place 95 percent of Yanukovych-era law enforcement officers. Later, most of those who failed re-certification were reinstated through the courts because of incorrect formulations of their dismissal.

On Friday, June 5, several hundred people gathered in front of the Verkhovna Rada to demand the resignation of Mr. Avakov, who has served as minister of internal affairs since 2014. Protesters also came to local police stations in Dnipro, Odesa, Kryvyi Rih, Ivano-Frankivsk, Lviv, Rivne, Kharkiv and Lutsk.

Kyiv, however, was the center of the action, and several different protests took place in the capital. A morning demonstration was organized by the movement “Avakov out.” There were separate announcements from the Holos and Pravyi Sektor parties. Despite the different organizers responsible for bringing out the protesters, one huge crowd appeared in front of the Parliament, largely without political symbols.

Activists and politicians gave their speeches. Quarantine restrictions were still in effect, so most of the protest participants were wearing masks. Speakers on stage were unrecognizable unless they took their masks off, which they did in most cases.

Police did not want to allow organizers to drive an old police car into the Parliament square, but thanks to the intervention of national deputies, police permitted entry of the vehicle, which protesters said was a symbol of the former police. The culmination of the event came when activists, fireworks in hand, set the old police car on fire. When police officers approached the burning car, they threw smoke grenades to force activists to move away. When activists turned over the car, police didn’t react, even though all of this was happening in front of the main entrance to the Parliament building.

While this protest was taking place outside, Mr. Avakov was in the Verkhovna Rada to report on the Kaharlyk case and answer deputies’ questions. “Among us, there are heroes, hard workers and, unfortunately, there are those who break the law. There are negative resonant events in every police force in the world. Still, it is fundamentally important how the Ministry of Internal Affairs system reacts to these events,” Mr. Avakov said.

“A disgraceful incident took place at the Kaharlyk police station, where police officers tortured, beat and raped a woman. What happened in Kaharlyk is unacceptable and requires a harsh reaction,” he continued. “Based on the results of the analysis of this incident and a joint meeting with the Verkhovna Rada Committee on Law Enforcement, we made certain decisions on additional inspection functions from the National Police personnel. In particular, the Custody Records system will be introduced in all police departments. The system includes a full video recording of investigative actions. Inspection personnel will be completely revamped, and inspectors will have the right to inspect any divisions, services, and individual employees at any time of the day. Moreover, during the professional selection of candidates for police service, an additional psychological examination will be conducted according to the latest methods to identify hidden signs of aggression and deviant behavior,” Mr. Avakov told the Verkhovna Rada.

Inna Sovsun, a deputy from Holos faction, reminded Mr. Avakov that a year ago, drunk police officers killed a 5-year-old boy, Kyrylo Tlyavov, and said that the minister should apologize to his parents.

“I will not do what you want. I will do what I have to do,” responded Mr. Avakov. “I am a patriot to the bone. And I will work for the state, not for the interests of some political parties.”

A few hours later, another gathering in front of the Cabinet of Ministers protested against the arbitrariness, impunity and corruption of the police. It was organized by the Center for Civil Liberties, KyivPride and Ukrainian Helsinki Human Rights Center to promote the idea that Ukraine should be a safe country for everyone without exception: women, children, people of different sexual orientation and gender identity, people of all ethnic groups and religious beliefs.

Answering journalists’ questions about Mr. Avakov on June 6, President Zelenskyy said, “There is still no better minister [of internal affairs]than him. I think he is a really powerful minister. I understand why there was a strike [against Avakov]. …if a person undertakes some sensational high-profile case, he must prove it and not throw it out halfway, just as I was afraid because of the dismissal of [Prosecutor General Ruslan] Ryaboshapka that we could have issues with the [Kateryna] Handzyuk case. It continues, I think it will be completed, and those who ordered the murder will be put behind bars. The situation is the same with Arsen Borysovych [Avakov],” Mr. Zelenskyy said. “I think he should complete the [Pavlo] Sheremet case. For society, he is a stakeholder in this situation, and he must bring it to a conclusion.”

Speaking in the Verkhovna Rada on June 2, National Deputy Sovsun had stated: “The façade reform of the patrol police has not yet changed the essence of the system. A system in which more than 60,000 tortures continue to occur each year. The police do not protect ordinary citizens, but they cover themselves very well. That is why the police who killed 5-year-old Kirill Tlyavov are not imprisoned. That is why Kaharlyk happened. And that is why the Holos party demands the dismissal of Minister Avakov. If you are afraid to sign the resolution calling for Avakov’s resignation, then bandits in uniform will continue to kill and rape, and bandits without shoulder straps will shoot on the streets of Ukrainian cities.”

Several days earlier, the national deputy had told RFE/RL: “Let’s face it, he’s been the internal affairs minister for the past six years, and six years is a long term, an amount of time that allows a person to make changes.” She added, “If there was a chance he was going to do something, he would have done it already.”