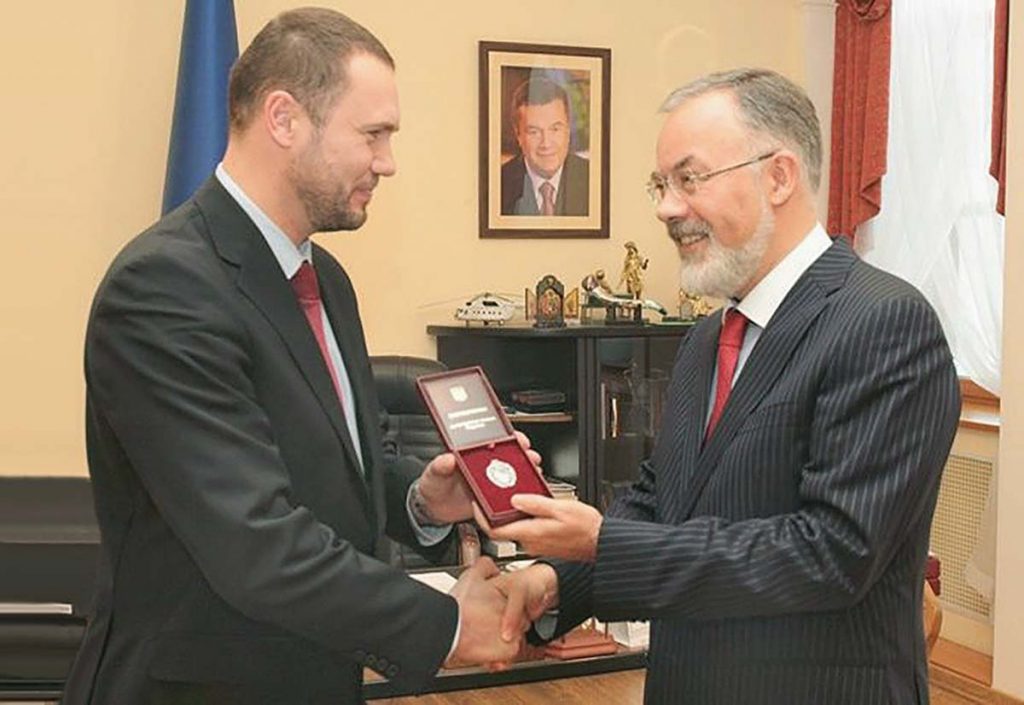 Staff | The Ukrainian Weekly | Subscription
The new acting minister of education, Serhii Shkarlet (left), had good relations with Yanukovych-era Minister of Education Dmytro Tabachnyk, as illustrated by this 2013 photo from the archives of the Ministry of Education and Science of Ukraine.

KYIV – The Cabinet of Ministers’ appointment of an acting minister of education and science of Ukraine has sparked a public outcry, marked by several public protests and official letters to the president and the government.

The appointee, Serhii Shkarlet, was a member of the Party of Regions and worked with President Viktor Yanukovych’s reviled Minister of Education Dmytro Tabachnyk. Mr. Shkarlet is also suspected of corruption and plagiarism. Nevertheless, both Pre­sident Volodymyr Zelenskyy and Prime Minister Denys Shmyhal supported him for the education minister’s role; as a result, Mr. Shkarlet was appointed acting minister even though the Verkhovna Rada committee on education did not vote its approval.

In the first Cabinet of the Zelenskyy administration, Education Minister Anna Novosad continued the reforms begun by her predecessors, particularly the program New Ukrainian School, which is meant to review and upgrade the skills and competencies children obtain in schools. The goal is to raise the quality of education in Ukraine to the standards of European educational systems.

In March, after the resignation of Prime Minister Oleksiy Honcharuk and his Cabinet, Ms. Novosad was not offered a place in the next government led by Prime Minister Shmyhal. However, Ms. Novosad’s seat was taken by her deputy, Lubomyra Mandziy. Ms. Mandziy served as acting minister of education and science at the time the coronavirus crisis forced all educational processes to be stopped or moved online due to quarantine restrictions. Yet, President Zelenskyy did not want to appoint Ms. Mandziy as a full-fledged minister. So, he started searching for other candidates to lead the educational and scientific system of Ukraine.

On June 2, Mr. Zelenskyy met with heads of leading higher education institutions in Ukraine. At the meeting, he stressed that there was a shortage of cadres in Ukraine. “If we do not seek a solution together, the cadre shortage in the country will remain. The state should solve this problem together with higher education,” the president said, adding that he himself feels the shortage of qualified personnel.

Mr. Zelenskyy sought recommendations for an education minister from the rectors of educational institutions, and they suggested a colleague from Chernihiv, a regional center in Ukraine’s north.

A week later, the president visited the Chernihiv National University of Techno­logy, where the rector of the university, Mr. Shkarlet, showed off the scientific and technical achievements of his students and educators. On June 17, Prime Minister Shmyhal registered a draft resolution in Parliament that proposed the appointment of Mr. Shkar­let as minister of education and science.

The very next day, educators and scholars gathered in front of the Verkhovna Rada to protest against Mr. Shkarlet’s appointment to head the Ministry of Education and Science. The demonstrators cited several reasons for their disapproval. First of all, Mr. Shkarlet ran for the Chernihiv Regional Council from the Party of Regions; he also admitted in an interview that he supported Mr. Yanukovych in the presidential election. However, in the local elections of 2015, Mr. Shkarlet ran for the Chernihiv Regional Council from the Petro Poroshenko Bloc; he wasn’t elected. The protesters also noted that significant plagiarism was found in the rector’s scientific works. Furthermore, in January of this year, Chernihiv National University of Technology used state funds to purchase a white Volkswagen Amarok Volcano pick-up worth more than 1.5 million hrv – a questionable decision, considering that the main passenger of the car is the university rector himself.

The latter argument was brought up by ex-Minister Novosad. “At the end of January, when each university received its new budget, we sent a letter saying, ‘Dear rectors, colleagues, many of you now have more funds. Use them to pay extra for teachers,’ ” Ms. Novosad wrote on Facebook. “What did Serhii Shkarlet, the rector of Chernihiv University of Technology do? He bought a car for $60 thousand at the university’s expense. Not a modest company car, but a VW Amarok Volcano for 1,500,000 hrv, which could have been spent on its best teachers, or dormitories, or laboratories.”

The Cabinet of Ministers then appointed him as acting minister on June 25. First, however, the Cabinet had to vote in favor of appointing Mr. Shkarlet as deputy minister, because it is possible to appoint someone as acting minister only if that person had the position of deputy. All these decisions were made during the closed-door portion of the Cabinet meeting. Observers say that these moves show how crucial this appointment is for Mr. Zelenskyy.

The deputy chairman of the Holos Party, Inna Sovsun, registered a proposal for a policy banning persons whose dissertations have been found to be plagiarized from government and civil service positions. “After all, academic dishonesty is not a narrow problem of the quality of education and science. Plagiarists are incompetent people because they lack the professionalism to write a dissertation on their own. Plagiarists are also dishonest people with questionable professional ethics. They cannot hold socially important positions,” the Holos party’s press service said.

National Deputy Sovsun also appealed to the National Agency for Quality Assurance in Education to officially check scientific works by Mr. Shkarlet, who is a physicist and mathematician, for plagiarism.

“The appointment of Mr. Shkarlet as head of the Ministry of Education and Science, contrary to the opinion of experts and even the relevant committee of the Verkhovna Rada, indicates not only a cadre shortage in the presidential team. It is also a sign of lack of quality standards for those who run the country. There are several reasons the Verkhovna Rada decided not to appoint Mr. Shkarlet as minister of education and science. But, as we can see, the will of the Parliament was not enough – the government went ahead and made the decision it planned,” said Ms. Sovsun.

On June 30, about 100 people staged a protest against Acting Minister of Education and Science Shkarlet outside the Cabinet of Ministers and the Presidential Office. Among the demonstrators was Ukrainian scientist Anton Senenko, who was recently visited by a representative from the Security Service of Ukraine because he was at a previous anti-Shkarlet rally. According to Mr. Senenko, the SBU asked him to report other protests.

It is important to note that public educational organizations and parents had appealed earlier to national deputies, the presi­dent and the prime minister to appoint a qualified leader of the Ministry of Educa­tion and Science. Educational reform is one of the country’s key changes, they wrote in an open letter signed by nearly 300 people, “because it is about the quality of education of our children, who will build the economy and other important areas of the country’s life.”

Therefore, these activists say, the future minister must be committed to educational reform in Ukraine, understand its importance and share the goal of reform: harmonizing the national education system with the principles and organizational structure of the world’s leading education systems.

They also cited the criteria that the minister should meet. The candidate must understand that the New Ukrainian School reform is designed for 2030, so it must be continuous, despite the inevitable changes in presidents, the Verkhovna Rada and the Cabinet. The candidate’s key competencies should also include an understanding of international trends, tools and approaches in the education of children and adults; working contacts with international organizations; the ability to be an active and influential player in global forums, as well as inter-ministerial meetings and negotiations.

According to the newly appointed acting minister, the essential tasks of the Ministry of Education and Science for the pandemic period are conducting an External Independent Evaluation (independent testing) and, as a result, implementing admissions to educational institutions.

“I can’t imagine how children can go to the first grade remotely,” said Mr. Shkarlet in an interview with LB.ua media outlet. “Maybe if the situation worsens, there will be a remote mode again. But first-graders should experience socialization in school. We are developing alternatives. There may be a mixed form of school attendance – partly offline, partly online. It is necessary to develop materials not only on the safety of sanitary conditions, but also on the conditions of education in order for children to receive proper socialization,” said the education minister.

“I have talked to a huge number of parents who insist that distance education is not exactly education. If there are one screen and three children in the family who have lessons at the same time, how do you manage it? Besides, children need care. And parents need to work. Of course, parents have to sit with the child, but they still have to earn a living. This is a huge social problem. If we only have distance learning, there will be social orphans,” Acting Minister Shkarlet commented.