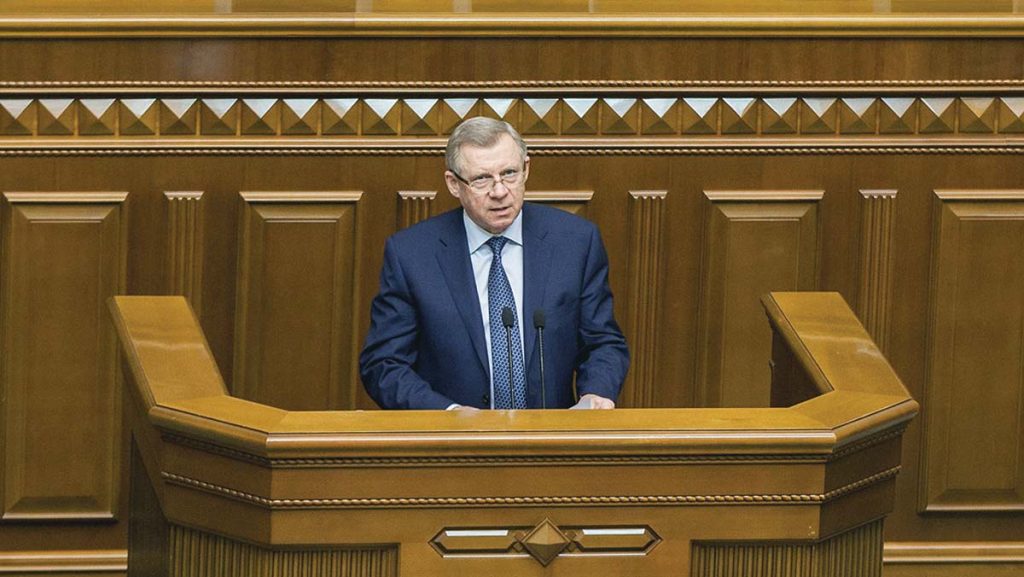 NBU
Yakiv Smolii addresses the Verkhovna Rada before the vote on his resignation as governor of the National Bank of Ukraine.

The next day, President Volodymyr Zelenskyy reiterated his commitment to the principle of the central bank’s independence and the need to preserve its institutional capacity. “An independent national bank is a guarantee of macroeconomic stability of the state and the welfare of Ukrainians. Therefore, as president, I will protect the independence of the NBU under any leadership as a basis for the financial and macroeconomic stability of our state,” Mr. Zelenskyy said in a statement on the Presidential Office website.

President Zelenskyy forwarded Mr. Smolii’s resignation letter to the Verkhovna Rada for a vote on his departure. On July 3, Mr. Smolii addressed the Parliament, explaining his decision and underlining the National Bank’s main achievements under his leadership. “For months, the central bank has been pressured to make decisions that are economically unsound, focusing on short-term, easy ‘victories,’ and that could take a tremendous toll on the Ukrainian economy and people in the long run,” Mr. Smolii stated.

“That includes pressure in courts, paid rallies, information attacks based on manipulation and lies, unfounded political assessments of the NBU’s policy and my actions as governor,” he continued. “Despite attempts by some to equate the NBU’s independence with the desire to distance itself from other public authorities, the NBU does not work in isolation. Neither do the economy and financial markets, which depend not only on the NBU’s policies but also on the ability of all public institutions to find common ground. We at the NBU have also been striving to find it. However, pressure is the antithesis of effective dialogue. A conversation in which one party speaks professionally of economics and finance while the other is concerned solely with a political gain is doomed to fail.”

“Does my resignation imply that the NBU has lost its independence? Not at all. My resignation comes as a protest. It is a signal and a warning that a red line is about to be crossed. As I step down as Governor, I seek to warn politicians against further attempts to undermine the institutional foundations of the Ukrainian central bank,” Mr. Smolii told the national deputies, who voted to confirm his departure. “After all, the NBU has made tremendous efforts to speed up the development of the economy and financial markets, advance the welfare of all Ukrainians, and do a lot more if not interfered with. I leave the NBU as an integrated institution that has a strategic vision, well-established processes, a strong professional team, and a good reputation among the world’s leading central banks and the international community,” he summed up.

Mr. Smolii served as chief of the NBU since March 15, 2018. He replaced Valeria Gontareva, under whom he served as a deputy.

During his time in office, Ukraine’s inflation slowed down, reaching the 5 percent target, and remained low. A flexible exchange rate regime was introduced, and the financial market infrastructure was modernized. Large-scale currency liberalization was launched, and international reserves reached an eight-year high. The Central Banking Awards recognized the NBU as the world’s most transparent central bank in 2019. At the same time, Mr. Smolii was named the Best Central Banker in Central and Eastern Europe in 2019, according to the Global Markets Award.

Yaroslav Rushchyshyn, the secretary of Verkhovna Rada’s Economic Committee, said he believes the departure of the NBU chairman due to political pressure is a very threatening signal for all Ukrainians. “With the beginning of the work of the new Verkhovna Rada, we see how the institutions on which the state is based are constantly shaken. Among them is the National Bank of Ukraine, the nature of which requires the absence of any influence from any side. The independence of the NBU is the key to our financial and economic stability, and independence. During the recent upheavals, in my opinion, only the NBU has shown disengagement. Therefore, almost for the first time in the history of independent Ukraine, the global financial crisis did not affect the hryvnia exchange rate,” said Mr. Rushchyshyn, a national deputy from the Holos faction.

“But when Yakiv Smolii resigns and says that it is impossible to withstand political pressure, this is a very threatening signal not only for investors but also for all citizens of Ukraine. The main risks of the resignation of the chairman of the National Bank are failure of cooperation with the IMF, inflation and the return of corrupt officials,” Mr. Rushchyshyn emphasized.

On July 2, Ukraine canceled the placement of 12-year Eurobonds, thanks to which it had attracted $1.75 billion on the market the day before. The official announcement appeared on the pan-European stock exchange. The Ministry of Finance managed to complete the agreement on the placement of Eurobonds right before Mr. Smolii’s announcement of his resignation. Ukraine’s new Eurobonds could be the government’s first entry into international capital markets since the beginning of the coronavirus economic crisis. Moreover, $750 million from the issue of these Eurobonds was to be used to repay debts on Eurobonds maturing in 2021-2022.

On the same day, the hryvnia currency fell by over 1 percent to its lowest level since April. On July 2, the demand for the U.S. dollar on the interbank foreign exchange market far exceeded the supply due to Mr. Smolii’s statement about “political pressure.” The market began to shake from the first minutes after news of the resignation, and the demand for foreign currency far exceeded supply. The National Bank had to sell at least $200 million to keep the exchange rate stable.

“Under the influence of the IMF, the National Bank of Ukraine [under Mr. Smolii’s leadership]pursued a policy of monetary deficit, i.e., a tight monetary policy, which on the one hand contributed to a fall in inflation to 1.7 percent and the strengthening of the hryvnia to 26.5 hrv per U.S. dollar, but on the other led to a decline in industry, exports and credit starvation and allowed foreign investors (speculators) to earn 20-25 percent in dollars on Ukrainian Domestic government bonds,” Prof. Oleksander Savchenko, rector of the International Institute of Business, noted.

Mr. Savchenko was an executive director of the European Bank for Reconstruction and Development and deputy governor of the National Bank of Ukraine until 2009. He commented that “the struggle for monetary power in Ukraine has begun, but it is not political parties fighting for it, but the real actors in power.”

“There are risks that the oligarchs will seize the monetary power, which will not only force the NBU to stop suing for the return of bank assets stolen in 2014-2019 in the amount of approximately 500 billion hrv (about $20 billion U.S.) but also chooses a policy of monetary intoxication. The consequence of such a policy will be high inflation, devaluation and financial destabilization. At the same time, there is hope for a rational decision regarding the new head of the NBU. It is possible if the West and Ukrainian people will act together against oligarchs, corrupt officials, and Russian interests,” said Mr. Savchenko, who was an advisor to the prime minister and the governor of the National Bank in the 1990s.

On July 7, the National Bank team appealed to Ukrainian society and complained of political pressure from some deputies. “We demand an end to political pressure on the NBU. Not in words but in deeds. We expect a reaction to the unethical behavior of some national deputies who came to the Verkhovna Rada to defend the interests of individual oligarchs.” According to the NBU team, the role of such deputies is to stop Ukraine’s cooperation with international partners.

The resignation of Mr. Smolii as the head of the National Bank of Ukraine will not affect the stability of the Ukrainian currency, according to Prime Minister Denys Shmyhal. Commenting on the resignation of the NBU head, he noted that the essential task is to prevent the creation of myths, speculation and manipulation about this departure.

According to Mr. Shmyhal, it will take some time to find a suitable candidate for the next governor of the NBU. The prime minister revealed that he had already taken part in consultations held by the president of Ukraine with the NBU Board, the NBU Council, the heads of state banks and the largest commercial banks, and the heads of banking associations. “There are two requirements for candidates: high professionalism and a sterling reputation. In the coming days, such a candidate will be selected. All bank managers, major players in the banking market, have already voiced their proposals; there is a shortlist of candidates,” said Mr. Shmyhal.

Among possible candidates to replace Mr. Smolii, national deputies named Volodymyr Lavrenchuk, Kyrylo Shevchenko and Tymofii Milovanov. Mr. Lavrenchuk is a former chairman of Raiffeisen Bank Aval, and he was a candidate for the post of NBU governor after the resignation of Ms. Gontareva. Mr. Shevchenko is the current head of the state-owned Ukrgasbank. Mr. Milovanov was the minister of economic development, trade, and agriculture in the Cabinet of Prime Minister Oleksiy Honcharuk. Now he is the president of the Kyiv School of Economics and a professor at the University of Pittsburgh.

In the meantime, the National Bank of Ukraine is temporarily headed by Kateryna Rozhkova, who was Mr. Smolii’s deputy.