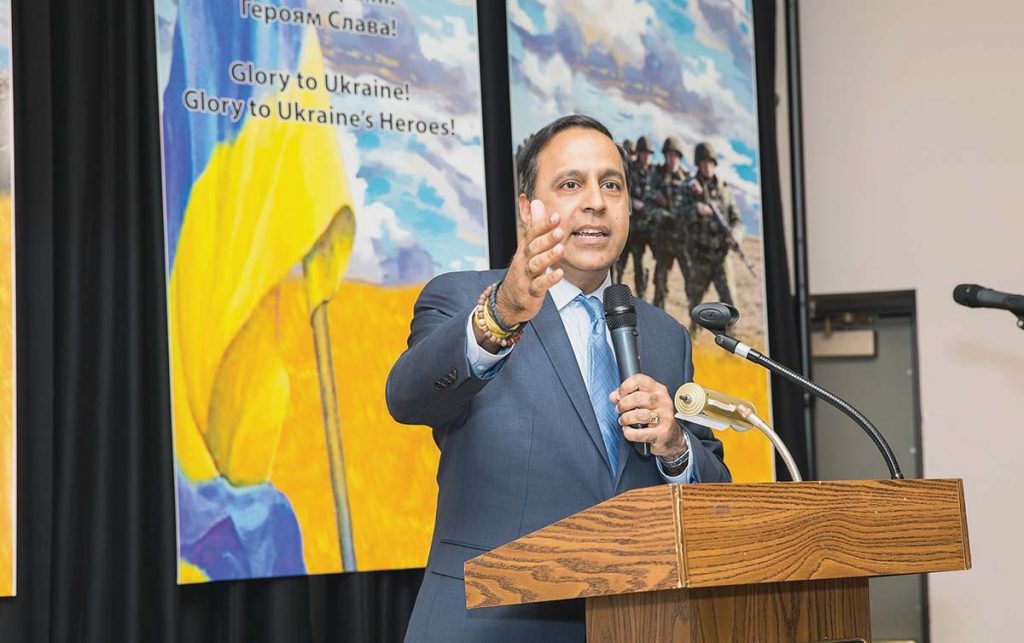 CHICAGO – Congressman Raja Krishnamoorthi, who represents the 8th Congressional District of Illinois, joined the Congressional Ukraine Caucus on May 26. His district includes an area northwest of Chicago that is home to many Ukrainian Americans, their churches and community centers. Congressman Raja, as he is popularly called, serves on the House Oversight Committee and the House Permanent Select Committee on Intelligence.

In an interview conducted by this writer on May 25, the congressman indicated his strong support for sanctions against Russia and Russian leaders as a result of the invasion and occupation of Crimea and Ukraine’s Donbas territory, and he pledged to support the U.S. position condemning Russia’s occupation of Crimea as an illegal act in violation of international law.

On the issue of American support of NATO and the European Union to enhance the national security of the countries of Eastern and Central Europe and the Balkans, the congressman stated, “I believe it is extremely important that the United States do everything in its power to protect our alliances from Russian aggression. In fact, as a member of the House Intelligence Committee, I have authored and passed into law bipartisan legislation, the Keeping Russian Entrapments Minimal and Limiting Intelligence Networks (KREMLIN) Act, which I co-led with Congressman Chris Stewart (R-Utah), that was signed into law by President Trump.”

The congressman continued, “As a member of the Intelligence Committee, I can state that the United States is the most powerful ally Ukraine has, and I believe it is important that we provide Ukraine with the necessary resources to defend themselves. I agree that supporting Ukraine should be seen as a national security issue, not just a political one, and I will continue to support military aid to Ukraine.”

On the question of Black Sea security, Rep. Krishnamoorthi expressed concern about the Russian naval fleet’s massive presence in the Black Sea and its ramifications for Ukraine’s security, as well as for U.S. interests in the Middle East and Europe. He stated that the Navy’s USS Fort McHenry’s transit into the Black Sea reaffirms U.S. resolve to Black Sea security and enhances America’s relationship with NATO allies and partners in the region.

The congressman noted the Ukrainian American community’s advocacy of Ukraine in Congress, and stated, “Your work through the Ukrainian Congress Committee of America is instrumental in shaping public policy outcomes to protect American allies.”

Rep. Krishnamoorthi came to the United States as a 3-year-old child with his family from India. In describing his experience as an immigrant, he said, “I certainly owe a lot to my parents who immigrated to the United States when I was very young in search for a better life. I do believe my family’s story is emblematic of the American dream, and is a story that so many hard-working people in the Ukrainian American community could relate to. When I was young, my family experienced times of financial struggle, and for a brief period participated in the federal food assistance program. Today, my father is a professor at Bradley University, my brother is a physician at UChicago Medicine, and I am honored to serve the people of Illinois’ 8th Congressional District in the U.S. House of Representatives.”