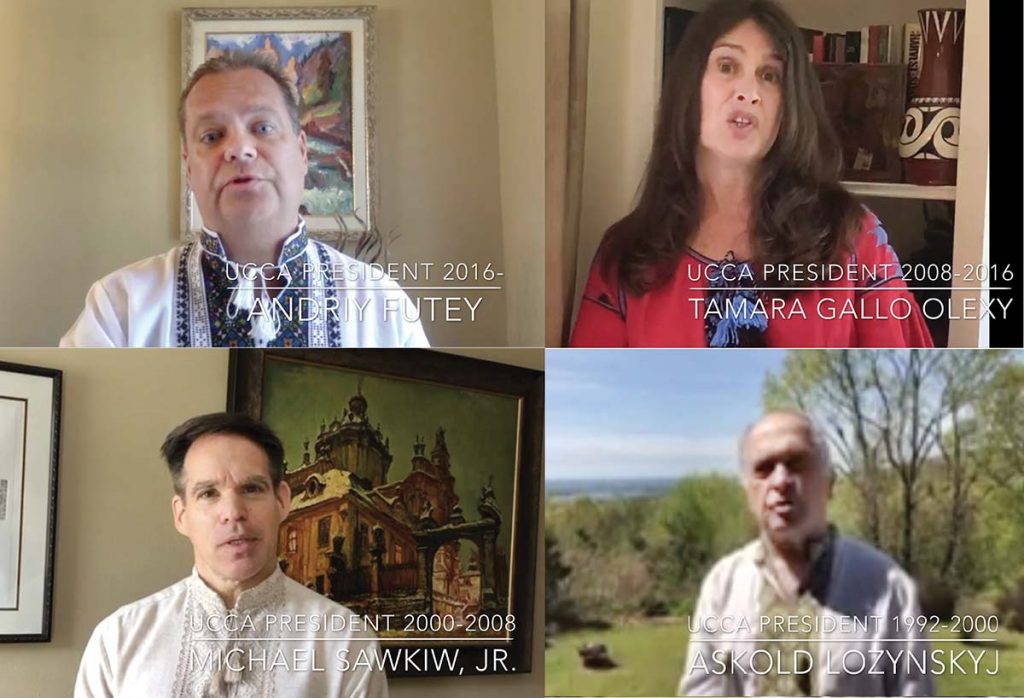 NEW YORK – The Ukrainian Congress Committee of America (UCCA) took to the Internet to mark its milestone 80th anniversary. Unable to celebrate as had been planned, due to the coronavirus pandemic, the UCCA deliberated options and adjusted its strategy to celebrate with virtual programs.

The first of the celebrations was on May 26, when at 7:30 p.m., the coordinated airing of UCCA’s celebratory anniversary was streamed on the organization’s website, Facebook page and YouTube channel.

The virtual event opened with a few words from UCCA’s president, Andriy Futey. Setting the tone for the evening, Mr. Futey warmly welcomed the community and special guests to the virtual celebration. Highlighting some salient facts of UCCA history and thanking the thousands of volunteers who served the organization through the decades, Mr. Futey concluded his remarks by raising a toast and wishing the UCCA many more years.

The Archeparch of the Ukrainian Catholic Metropolitan-Archeparchy of Philadelphia was the next to address the UCCA. Metropolitan-Archbishop Borys Gudziak reassured the UCCA of the Church’s support, stating, “The winds of war occasioned the gathering of the congress – the first time, 80 years ago, we came together. Today we see that even the quarantine, even this pandemic cannot separate us – we stand together, we are united, the Catholic Church is with the Congress.”

Speaking chronologically, the former presidents highlighted the vital role the UCCA played and continues to play in representing the interests of the Ukrainian American community and the leading role it played in the ceaseless battle for Ukraine’s liberation. They also outlined the UCCA’s important role in directly assisting our community’s brethren in their ancestral homeland following Ukraine’s renewed independence in 1991.

The UCCA’s important role was probably best summed up by Ambassador Dobriansky, daughter of the UCCA’s longest serving president, who stated “my father believed in the importance of the mission of the UCCA and its very unifying purpose, which is underscored by the fact that it has lived a very long life.”

Also joining in the celebration were Ukraine’s Foreign Affairs Minister Dmytro Kuleba and former President Petro Poro­shenko as well as the president of the Ukrainian World Congress (UWC), Pavlo Grod. All underscored the important mission the UCCA has played in the life of the Ukrainian American community as well as the umbrella organization’s support for Ukraine.

Well-acquainted with UCCA history, Minister Kuleba highlighted many of its accomplishments in his sincere greeting. He also thanked the UCCA for its continuing role in helping Ukraine secure its independence: “You are not just our partners; you are our friends, …our brothers and sisters… who continue to battle with us for a peaceful, prosperous and European future for Ukraine.”

Former President Poroshenko, thanked the UCCA for being Ukraine’s “guardian angels” during its long history of standing in solidarity with captive Ukraine, exposing the truth about the Ukrainian people imprisoned by a totalitarian regime, and standing side by side with independent Ukraine in its desire to live in peace and join the Euro-Atlantic community.

The program’s final speaker, UWC President Grod, highlighted the fact that the UCCA was the initiator and one of the founders of the Ukrainian World Congress and he thanked the UCCA for 80 years of successfully leading and coordinating the Ukrainian American community. “Your strong voice and advocacy continue to be critical in ensuring the bipartisan support for Ukraine in the United States, which is arguably Ukraine’s strongest defense against Russia’s imperialist ambitions,” Mr. Grod stated.

In addition to video greetings, images of public tweets from Ukraine’s President Volodymyr Zelenskyy and Ukraine’s Ambassador to the United States Volodymyr Yelchenko were included in the video presentation. President Zelenskyy congratulated the UCCA on its 80th anniversary by tweeting: “The Committee plays an extremely important role in the life of the Ukrainian community in the United States. Deeply grateful for its huge contribution to the protection and advocacy of Ukraine’s rights and interests.” Ambas­sador Yelchenko congratulated the UCCA on its anniversary, tweeting, “I appreciate your many years of inspired work for the prosperity of Ukraine, for the true partnership between Ukraine and the United States. The Embassy of Ukraine is happy to join in today’s virtual celebration. Let’s celebrate together!”​

On June 16, the UCCA released the second in a series of online videos dedicated to its 80th anniversary. UCCA President Futey opened the second video – titled “Cong­ressional Greetings on #UCCA80Years” – with brief remarks about the UCCA’s history of accomplishments in working with the U.S. Congress. These included the UCCA advocating for the passage of the Displaced Persons Act of 1948, which allowed for more than 200,000 persons to enter the U.S., nearly half of whom were Ukrainians; the UCCA’s raising of public awareness of all nations living under Soviet oppression by helping establish Captive Nations Week in 1959; and its work in initiating a public law to erect a permanent monument to Taras Shev­chenko in Washington in 1964.

Senate Ukraine Caucus (SUC) Co-Chairs Rob Portman (R-Ohio) and Dick Durbin (D-Ill.) followed with words of gratitude to the Ukrainian American community, focusing on their respective decades of working alongside the Ukrainian communities in their home states. Foremost on their minds, however, was continuing U.S. support for Ukraine as it defends itself from continued Russian aggression.

Whereas the SUC, which unites U.S. senators who share a desire to work on and support Ukraine-related issues, was formed in 2015 in the aftermath of Russia’s invasion of Ukraine, the Congressional Ukraine Caucus (CUC) was established back in 1997 and has a long record of strong, bipartisan support for Ukraine in the Congress.

As UCCA continues to receive celebratory greetings on its 80th anniversary, it will make them public on UCCA’s YouTube page (bit.ly/UCCATube), its Facebook page (facebook.com/UCCA.org). All materials will be archived on the UCCA website at UCCA.org/80Years.