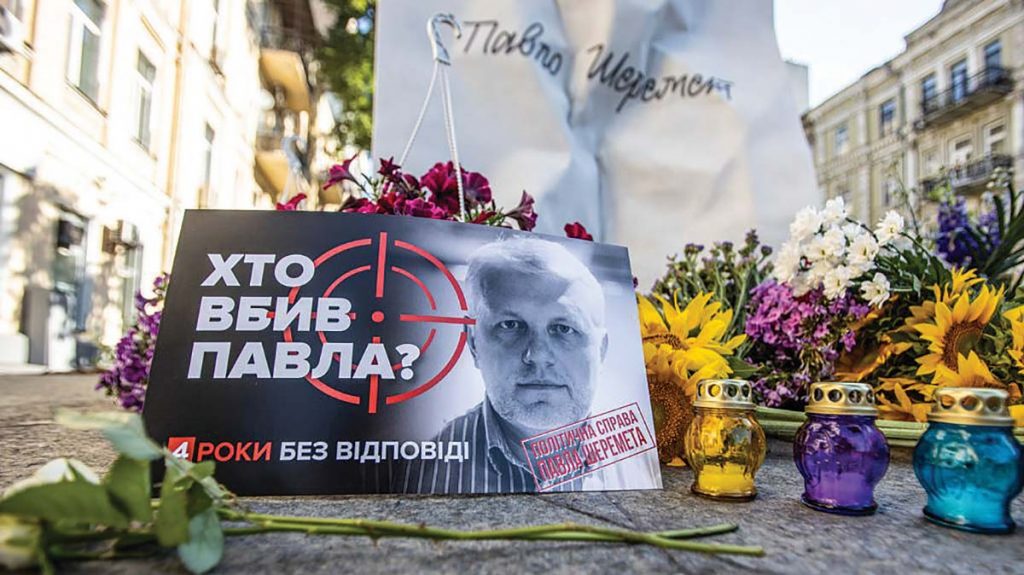 RFE/RL
A sign asking, “Who killed Pavlo?” in front of the new memorial to Pavlo Sheremet in Kyiv. Designed by sculptor Nazar Bilyk, it depicts a creased sheet of paper with Sheremet’s name on it.

KYIV – Each year on July 20, a community of journalists and friends of Pavlo Sheremet, the Belarusian-born Ukrainian journalist murdered in 2016, come to the place in the center of Ukraine’s capital where he was killed. This year a monument was unveiled near the site where an improved explosive device was planted under his car. Four years later, the murder case has yet to be solved.

The editor-in-chief of Ukrayinska Pravda, the news outlet where Sheremet worked his last years, Sevhil Musayeva, spoke at the opening ceremony. She thanked, in particular, sculptor Nazar Bilyk, who created the memorial, and Kyiv Mayor Vitali Klitschko.

“The monument and Pavlo are incompatible concepts, because Pavlo was always about life, about the moment, about joy. Of course, I am outraged that, four years later, we do not know who murdered him. But I am sure that sooner or later we will find out,” Ms. Musayeva stated.

Back on December 12, 2019, President Volodymyr Zelenskyy and Internal Affairs Minister Arsen Avakov took part in a National Police briefing on the Sheremet case. The police announced they had detained musician and veteran Andriy Antonenko, military medic Yana Duhar and cardiac surgeon Yulia Kuzmenko as murder suspects. The investigation alleged that Ms. Duhar photographed the closed-circuit TV cameras on the eve of the murder, while Dr. Kuzmenko planted an explosive under the car together with Mr. Antonenko.

However, both the news media and the suspects’ lawyers have found numerous inconsistencies in the investigators’ report, including a difference between the height of the suspects and the people who were recorded on video at the scene of the crime.

Mr. Antonenko’s defense claims he is taller than the real killer captured on video. Ms. Duhar’s lawyers insist she has an alibi confirmed by documents and witnesses, and that the examination on which suspicion is based is incomplete and biased. Dr. Kuzmenko maintains the investigation is seriously flawed. According to the defense, at the time of Sheremet’s murder, Ms. Duhar was not acquainted with the other two suspects; Dr. Kuzmenko and Mr. Antonenko had communicated with each other only a few times.

Those inconsistencies, and the positive reputations of the three suspects among the veteran and volunteer communities, have sparked numerous protests near the Ministry of Internal Affairs, the Presidential Office and the courts where proceedings were held.

Earlier, investigators had believed that Mr. Antonenko, “fascinated by ultranationalist views cultivating the greatness of the Aryan race,” organized the assassination. The police now believe that unidentified organizers acted for personal reasons and “decided to create an extremely resonant event in society” in order to provoke protests.

“I am ready to take responsibility if the investigation was wrong, if there were big mistakes, if, God forbid, something special was directed against these people. I am ready to make serious personnel conclusions where I have influence,” President Zelenskyy said two months ago.

The Ukrainian Weekly reached out to the Institute of Mass Information (IMI) for a comment on the overall situation of freedom of speech and security of journalists in Ukraine. “The situation in the country remains relatively stable,” said media expert Iryna Zemlyana, security trainer for journalists at IMI. “Freedom House, in its annual Press Freedom Index survey, identifies Ukraine as partly free. We see an increase in the number of violations of journalists’ rights during special circumstances. For example, we recorded a significant deterioration during the election period in Ukraine and, of course, during the events on the Maidan in 2013-2014 and with the beginning of the Russian annexation of Crimea and aggression in eastern Ukraine,” noted. Ms. Zemlyana.

The Institute of Mass Information has also analyzed the situation of working journalists during this time of the coronavirus crisis. “During the quarantine period related to the COVID-19 pandemic, we recorded a decline with regard to journalists’ access to information. In the first six months of 2020, we recorded 112 cases of violations of freedom of speech in Ukraine. Of these, 86 concerned physical aggression against journalists. In comparison, during the same period last year, 116 cases of violations of freedom of speech were recorded,” according to the IMI.

“The main violators of freedom of speech usually change over time. Under the Yanukovych regime, they were law enforcement officers; and under Poroshenko, they were ordinary citizens. Law enforcement agencies do not meet the challenges and do not investigate cases of obstruction of journalistic activity and, as a result, impunity creates new violations. We have only a few court decisions as a reaction to freedom of speech violations since Ukraine’s independence,” Ms. Zemlyana explained.

Asked what steps the government should take to improve the situation regarding freedom of speech, Ms. Zemlyana said: “It is necessary to determine the legal status of a journalist. Under Ukrainian law, a journalist is a person who works in the media, and the online media under this law cannot be considered as media. That is, the legal framework is outdated, and they are in no hurry to change it. That is why it hinders the protection of journalists’ rights.”

“We at IMI carefully analyze each case and are not tied to media registration, but sometimes it is challenging for law enforcement to prove it. At the same time, many pseudo-journalists do not adhere to journalism standards and abuse a journalist’s status. That also distorts the situation,” she added.

For Sheremet’s memorial day, Ukrayinska Pravda released a statement about the ongoing investigation into his murder. “We understand that it was impossible to avoid the investigation’s politicization. However, we, as Pavlo’s friends and colleagues, are interested only in the truth. At present, neither the prosecution nor the defense has enough arguments to draw definitive conclusions. The only thing we can say for sure is that the minister of internal affairs, Arsen Avakov, is responsible for solving this case and finding the perpetrators of this crime, as he was four years ago. We have no interest in imprisoning innocent people for the murder of our colleague. Nor will we be able to forgive ourselves if the guilty are not punished,” the statement says.

On July 20, the U.N. Human Rights Monitoring Mission in Ukraine released this statement: “Murders and violent attacks on journalists must stop. We call on the authorities to ensure accountability in this high-profile case, while ensuring all the guarantees of an effective and impartial investigation and a fair trial for the defendants. Restrictions on access to court buildings have been imposed in connection with the COVID-19 pandemic. However, international human rights standards require that court hearings be open unless there are specific reasons for closing them. We urge the court to ensure that journalists and all interested members of the public have access to the hearings, including online broadcasts. We call on the authorities to ensure security in the courts and to bring the perpetrators to justice.”

Commenting on the Sheremet case’s ramifications, IMI’s Ms. Zemlyana said, “We note the lack of publicity and transparency of law enforcement agencies. They do not comment transparently enough on the investigation and report to the public. Every uninvestigated murder case affects the journalistic community. I do not think this has a significant effect on criticism of politicians or anti-corruption investigations, but it certainly forces journalists to be more careful.”