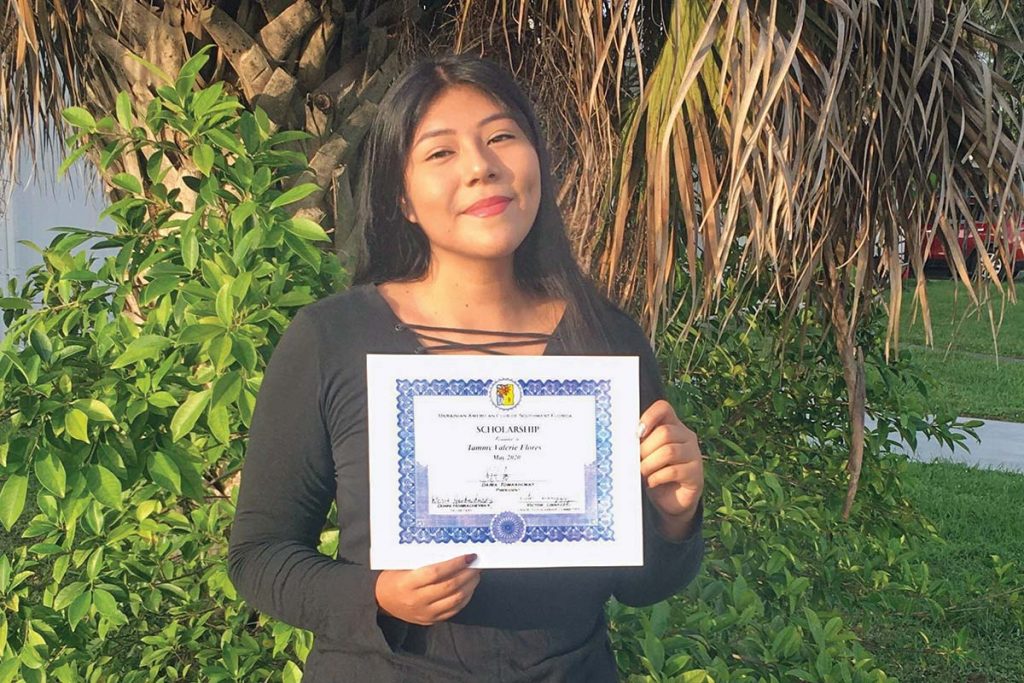 Staff | The Ukrainian Weekly | Subscription
Tammy Valerie Flores, recipient of the 2020 scholarship of the Ukrainian American Club of Southwest Florida.

NORTH PORT, Fla. – The Ukrainian American Club (UAC) of Southwest Florida, organized over 20 years ago, encourages and promotes interest in Ukraine, its people, culture and heritage among the greater American public. The club continuously offers exhibits, forums and lectures in support of its objectives. One of the ways the UAC accomplishes this is through an annual scholarship program which is open to any North Port or Port Charlotte High School senior.

The scholarship criteria this year included an essay on the achievements of a 20th or 21st century Ukrainian from either the arts or science/technology.

This year’s recipient of the $1,000 UAC scholarship is Tammy Valerie Flores, a senior attending Port Charlotte H.S. Ms. Flores’ winning essay was about Dr. Tamara Martsenyuk, associate professor of sociology at the National University of Kyiv-Mohyla Academy. Dr. Martsenyuk’s work is in the area of gender equality in Ukraine.

Ms. Flores plans to study nutrition science on a pre-med track. Her academic achievements include: first place at the Port Charlotte H.S. science fair, four-year participation at the regional science fair and a special award for excellence in the field of in-vitro biology. Ms. Flores was also invited to represent her school at the Florida Girls State Program at Florida State University.

Ms. Flores is co-captain of the color guard for the Port Charlotte H.S. marching band and vice-president of the Environ­mental Club, which she helped co-found. She is a member of the National Art Honor Society and is involved in community volunteer work. She is an avid conservationist and helps many local groups clean up local beaches and parks in her community.

The members of the Scholarship Committee – Victor Lisnyczyj (chairman), Lidia Bilous, Katia Steciuk, Ihor Hron and Gene Tomashosky – and the members of the Ukrainian American Club of Southwest Florida congratulated Miss Flores on her winning essay and wished her continued success in her academic pursuits and chosen career.