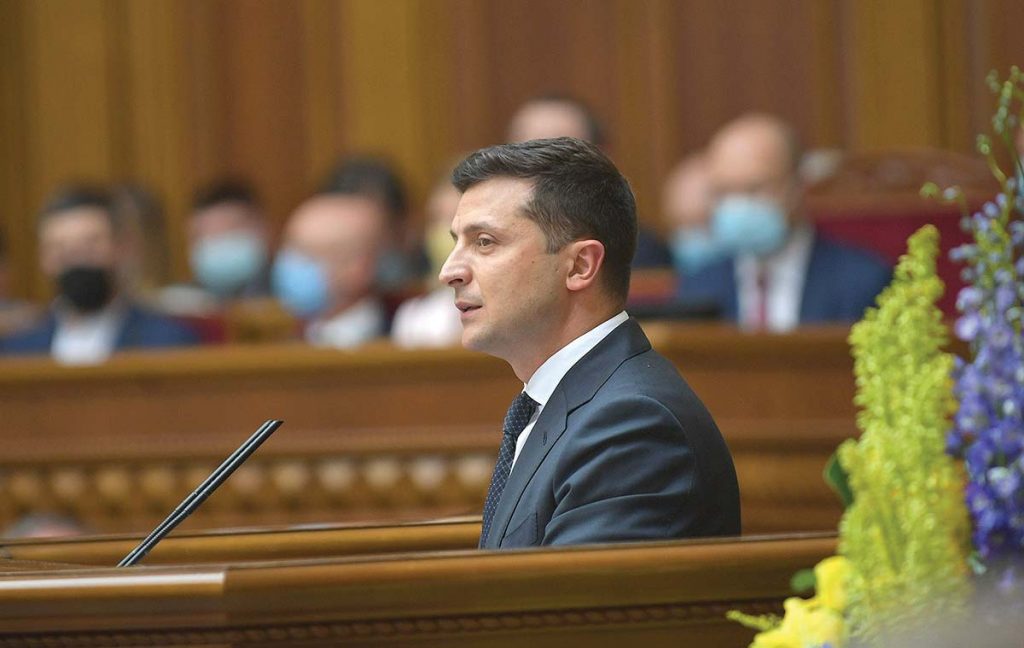 KYIV – President Volodymyr Zelenskyy took part in a solemn session of the Verkhovna Rada on the occasion of the 30th anniversary of the adoption of the Declaration of State Sovereignty of Ukraine.

The July 16 event was also attended by the head of the Presidential Office, Andriy Yermak; the chairman of the Verkhovna Rada, Dmytro Razumkov; former Presidents of Ukraine Leonid Kravchuk, Viktor Yushchenko and Petro Poroshenko; Prime Minister Denys Shmyhal; members of the Cabinet of Ministers, national deputies of the first and ninth convocations of the Rada; heads of the judiciary; heads of diplomatic missions of foreign states; heads of missions of international organizations accredited in Ukraine; media representatives and other guests.

The Veryovka Choir performed the national anthem of Ukraine. Afterwards, a documentary film about the events related to the adoption of the Declaration of State Sovereignty on July 16, 1990, was shown in the session hall of the Parliament.

The attendees of the solemn session honored the memory of deceased deputies of the first convocation with a moment of silence.

In his speech on the occasion of the 30th anniversary of the Declaration of State Sovereignty, President Zelenskyy noted that the document had become a fundamental one for the creation of the Ukrainian state. “The declaration brought closer the victory of Ukrainians in the centuries-old struggle for a free and independent state,” he said.

He emphasized that, for the sixth year in a row, Ukrainians have been defending their sovereignty from Russian aggression, and paying the highest price. He commented that the entire civilized world recognizes that Ukraine is doing everything to achieve a cherished and fair peace, where the state sovereignty of Ukraine “prevails in reality, not on paper.”

“We lost part of our territory. We lost our people. And, unfortunately, we cannot bring back the dead. But we must return all our territories. Restore faith in truth and justice. So that what our heroes died for never turns out to be useless. I am convinced that we, Ukrainians, have a chance to achieve this only in one case – if we all unite. Just like 30 years ago,” the president stated.

Mr. Zelenskyy called on the national deputies of the Rada’s current convocation to preserve the state sovereignty of Ukraine won by their predecessors, and to protect it “both from external enemies and from internal quarrels.” He underscored the need to abandon quarrels, manipulations and political games, as well as to stop “dividing Ukrainians into power or opposition, left or right, red or blue.”

“I will incessantly call for a true unity. Because our strength and victory is in it. Because Ukraine is in it,” Mr. Zelenskyy said.

“We need to stop being politicians. It’s time to become statesmen. People who have not a big appetite, but a big dream – about a united, strong and invincible Ukraine. This is my dream. And my goal. I am sure it is yours, too,” the president summed up.

Prime Minister Shmyhal noted that the Declaration of State Sovereignty defined the foundations of the state, political and economic system of Ukraine. “The declaration defined the foundations of economic independence, the independent banking, financial, customs, tax systems, the right to form a state budget, to have our own currency. On this basis, Ukraine’s economic progress is being formed,” he said.

Mr. Shmyhal said he is convinced that the power of this document over the years will give Ukraine a boost for development, and an opportunity for Ukrainians to be among the world leaders.

“We must all work for the good of Ukraine. I call on everyone to unite in thoughts and actions,” the prime minister stressed.

Leonid Kravchuk, the president of Ukraine in 1991-1994, noted that the Declaration of State Sovereignty had been adopted at a difficult time for the country, and the document had responded to all the challenges of that time.

“People were looking for answers, they wanted to know how we would live on… The Declaration of Sovereignty of Ukraine paved the way forward,” he said, adding that Soviet politicians obstructed the establishment of Ukraine’s independence.

Mr. Kravchuk observed that a new generation of Ukrainians had grown up since then, creating modern Ukraine.

He also called for preventing anyone from interfering in the internal affairs of the state and for ending internal strife. “I appeal to you with a great request: stop shaking the flywheel of strife in society and in the Verkhovna Rada itself. I look at all the discord and often think: is it really a search for a better way, or is it a search for the shortest way to power through populism and all sorts of ugliness?”

Mr. Kravchuk also noted the importance of political culture. He warned against confrontation between the elites of the center and the country’s regions, as well as against the contempt of government officials for the laws of Ukraine.

The first president of independent Ukraine said he is convinced that the Ukrainian state will win if it relies on its history, freedom and human rights, national values, etc.