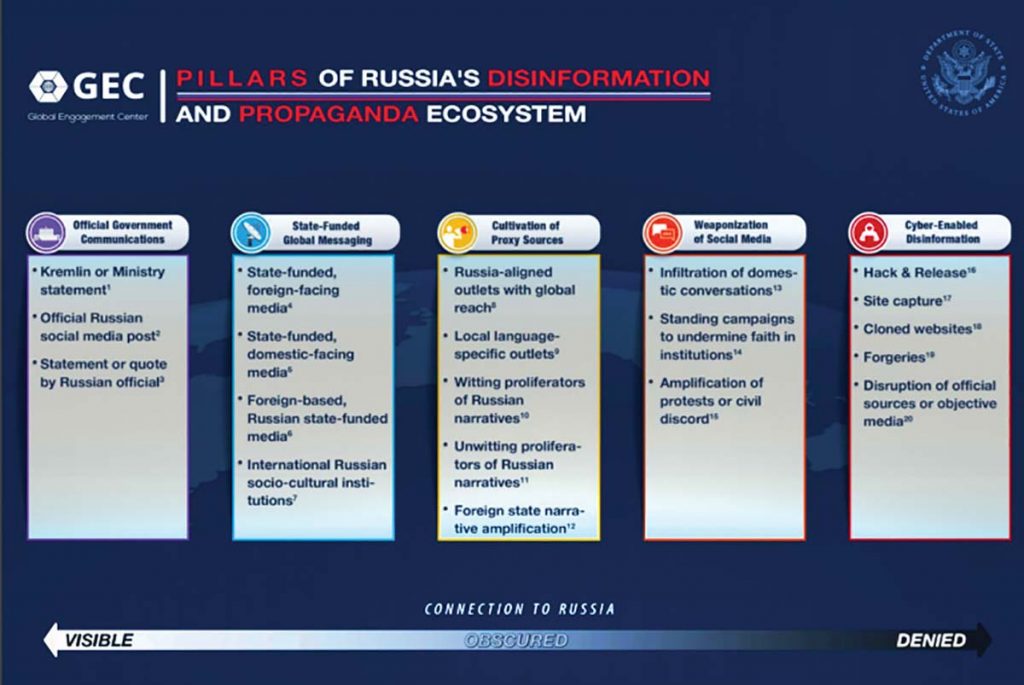 WASHINGTON – “As the U.S. Government’s dedicated center for countering foreign disinformation and propaganda, the Global Engagement Center (GEC) at the U.S. Department of State has a mandate to expose and counter threats from malign actors that utilize these tactics. In this field, Russia continues to be a leading threat.”

These are the opening sentences of the report issued by the U.S. Department of State in early August titled “Pillars of Russia’s Disinformation and Propaganda Ecosystem.” The State Department’s 70-page report is replete with details about the Russian propaganda machine, precisely enumerating and highlighting the effective use of disinformation.

The Global Engagement Center (GEC) at the U.S. State Department is an iteration of previously existing U.S. government interagency coordinating bodies. Its task was repurposed in an amendment to the National Defense Authorization Act (NDAA) for Fiscal Year 2017 to “counter foreign state and non-state propaganda and disinformation efforts” that threaten U.S. and allies’ national security interests. Spearheading those efforts were Sens. Rob Portman (R-Ohio), co-chair of the Senate Ukraine Caucus, and Chris Murphy (D-Conn.), the caucus’s vice-chair, who sought to strengthen the GEC’s efforts and increase its budget to no less than $80 million.

Three years after its reformation, the GEC released its detailed report providing narratives and graphics on how Russian disinformation is spread, information on Russia’s use of proxy profiles in areas throughout the world, and an analysis of Russian digital media usage.

Russia’s multi-dimensional use of government, state-funded agencies, and proxy websites allow it to reach a broad spectrum of audiences. According to the report, this multi-use effort provides Russia with an unparalleled advantage in spreading its disinformation tentacles. “First, it allows for the introduction of numerous variations of the same false narratives,” the GEC report notes. “Second, it provides plausible deniability for Kremlin officials when proxy sites peddle blatant and dangerous disinformation… Third, it creates a media multiplier effect among the different pillars of the ecosystem that boost their reach and resonance.” This methodology reinforces Russia’s response to worldwide events and policies, even questioning democratic institutions and their effectiveness.

A large section of the GEC Russian disinformation report is dedicated to a cross-section of “proxy site profiles” that highlights websites and organizations that propagate the Kremlin narrative. The Russian proxy sites cover a vast array of topics to disseminate their messages by sharing articles or social media posts attributed to known propaganda or disinformation. All of the sites highlighted in the report share the commonality of being an “alternative source of information” whose intent is to disseminate the Russian narrative in Western and mainstream society.

One such site is the Crimean-based outlet News Front that has reported ties “to the Russian security services and Kremlin funding… focused on supporting Russian proxies in Ukraine.” According to the GEC report, News Front is one of the “most blatant Russian disinformation sites.” The website was registered by Roskomnadzor, a Russian governmental agency that coordinates mass media. New Front claims to publish information in nearly a dozen major languages and has editorial contributors from throughout the world.

Numerous media outlets have described News Front as waging an egregious information war against Ukraine, while the European Union’s EUvsDisinfo project documented the website’s activity, which included false claims such as “…cooperation with Europe is a catastrophe for Ukraine. Ukraine has become a colony of the IMF and George Soros, and its president is a CIA puppet. Ukraine cannot control the coronavirus… Nazis are patrolling Kyiv’s streets.”

The GEC report provides a comprehensive review for seven sites that are used by the Russian government and their proxies to disseminate propaganda. The sites enumerated in the GEC report include: The Strategic Culture Foundation, New Eastern Outlook, Global Research, News Front, SouthFront, Geopolotics.ru and Katehon. For each site, the report provides detailed information about its scope, topics addressed (from Ukraine to the coronavirus, from the Middle East to Western philanthropists, from European politics to election polling and analysis), the number of people engaged, languages used, cross-platform social media attributed to the sites and partnering organizations.

The GEC report also analyzed the seven Russian propaganda sites’ usage of digital media, in particular Twitter. “From 1 April to 30 June 2020,” the report states, “the GEC identified 173,000 tweets and retweets that include links to these outlets [the seven above-mentioned sites].” In particular, the State Department report notes that the Crimean-based News Front Twitter and YouTube accounts have all been suspended for violating “Twitter rules… and YouTube’s Terms of Service,” though the disinformation spread on its website was shared by other cross-platform Russian-proxy accounts.

Additional statistics provided in the report include the top 10 countries that retweeted the thousands of tweets in the April 1-June 30 time-period: the United Kingdom (16 percent), Russia (9 percent), Canada (7 percent), Japan (6 percent), France (5 percent), Spain (4 percent), Chile (4 percent), Venezuela (4 percent), Germany (3 percent) and Australia (3 percent). During that three-month period, the daily number of tweets from the seven Russian disinformation sites averaged between 3,000 and 5,000.

The Global Engagement Center “Pillars of Russia’s Disinformation and Propaganda Ecosystem” report can be found on the U.S. Department of State website at https://www.state.gov/russias-pillars-of-disinformation-and-propaganda-report/.