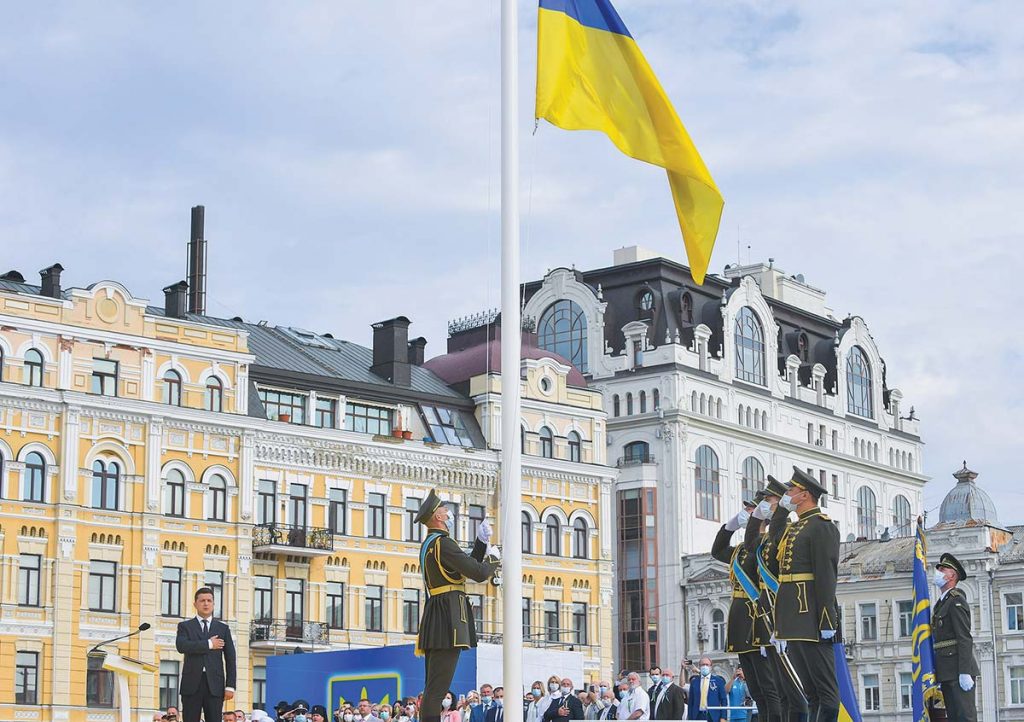 Presidential Office
During official events on the occasion of Ukraine’s Independence Day, August 24, at St. Sophia Square in Kyiv.

KYIV – Ukraine celebrated the 29th anniversary of the re-establishment of its independence on August 24 with an address to the nation by the president, festive events on St. Sophia Square and the unofficial March of Defenders of Ukraine.

As Ukraine geared up for the festivities, the COVID-19 situation in the country was worsening. The number of coronavirus cases had been setting records almost every day, and Ukraine ranked third in Europe in terms of the number of newly infected people. Nonetheless, the main difference between the 2020 celebrations and previous years’ Independence Days was the occasional mask regime, which is impossible to enforce in large crowds.

As always, the celebrations began on the eve of Independence Day, which is also a holiday, Ukrainian National Flag Day. For the occasion, the Kyiv City Administration constructed a new memorial that features the largest flag in Ukraine. The height of the flagpole is about 90 meters, and the size of the flag itself is 16 by 24 meters. Kyiv Mayor Vitaly Klitschko said that the memorial was built with funds donated by private patrons.

On August 24, the official festive events dedicated to the Independence Day took place on St. Sophia Square in Kyiv.

“A year ago, I talked about how my every morning starts with a text message from the General Staff of Ukraine,” President Volodymyr Zelenskyy began his speech. “SMS about the number of wounded and dead over the last day on the frontline. The numbers may be different, but only one message makes the morning good: zero wounded, zero dead. Today is the 29th day in a row when the morning is perfect for me and Ukraine. Yes, we face many new challenges. But today is 29 days with no combat losses in the east of Ukraine.”

“And today, on the 29th day of the truce, on the 29th anniversary of Ukraine’s independence, we all ask God for only one thing: let the days of silence become months. Months – years. Years – centuries, and then millennia. Peace, harmony, and prosperity for the Ukrainian land. And we believe that this will definitely happen because we send requests to Heaven from this very landmark, St. Sophia Square,” said the president.

President Zelenskyy and his wife, Olena, also honored the memory of the Heroes of the Heavenly Hundred and warriors who died defending the sovereignty and territorial integrity of the state. After that, the presidential couple, together with veterans and members of the families of fallen warriors, laid flowers at the Wall of Remem­brance near St. Michael’s Golden-Domed Cathedral.

Next on the agenda was the “Prayer for Peace and Blessing of Ukraine,” during which Church leaders thanked the Lord for an independent Ukraine. The service was held in the courtyard of St. Sophia Sobor.

After traditional ceremonies and the presentation of state awards, the most controversial part of the 2020 celebrations took place: a musical performance that strove to combine the 42 most notable Ukrainian songs of the last 29 years. Excerpts from the songs were performed by several Ukrainian singers, including Jamala, Oleksandr Ponomariov, Nina Matvi­enko, Taras Topolya, Potap, Oleh Vynnyk, Monatik, Iryna Bilyk, Ruslana, Tina Karol, Natalia Mohylevska and others.

The choice of some performers also caused controversy. Iryna Bilyk, Potap, Nata­lia Mohylevska, Oleh Vynnyk and Olya Polya­kova are notorious for no position or an unclear position about the Revolution of Dignity and Russian aggression against Ukraine. Ms. Bilyk and Ms. Mohylevska had in the past taken part in promotional concerts in support of Viktor Yanu­kovych. Mr. Vynnyk recently said, “it’s not time to say whose Crimea is.”

Observers pointed out several other reasons for criticism. First of all, some songs were in Russian, which many consider to be inappropriate for Ukrainian Independ­ence Day. Catchy pop songs, especially in the aggressor’s language, critics say, go against the spirit of a holiday attended by war veterans. The distaste prompted by the choice of language was compounded by the vulgar costumes worn by some performers.

Moreover, after the show, the bands Okean Elzy, Boombox and Tartak stated that the celebration’s organizers did not ask for permission to use their songs in the performance. The song “Vakhteram” by the group Boombox was performed by Vremya i Stekl”, and “Tam De Nas Nema” by Okean Elzy was performed by a choir and Verka Serdyuchka. Tartak’s songs “Ponad Khmaramy” and “Ni, Ya Ne Tu Kokhav” were performed by Nina Matvienko and Potap with Pavlo Zibrov, respectively.

A year ago, President Zelenskyy decided to cancel the traditional parade on the Khre­shcha­tyk. As a result, veterans and volunteers organized an alternative march on Kyiv’s main boulevard. This year’s second annual March of Defend­ers of Ukraine was attended by thousands of people.

“It was very important for me to be a part of the veterans’ march in Kyiv,” said Natalie-Helen Dunai, who attended the march. “I have come here from Lviv to pay respect to veterans and volunteers, and to support them. Ukrainians should cherish the freedom and the peaceful sky they have thanks to veterans.”

“Independence Day to me is a celebration of solidarity among Ukrainians, mutual understanding and respect, because only with respect and solidarity, can we overcome the challenges our country is encountering, and win the war,” she added.

“This year’s Independence Day was both happy and sad for me,” commented Ms. Dunai. “It was very nice to see all the people who came to the march from all over the country, and to feel the strong spirit of solidarity and respect. However, the war is still going on, and the state did not take any part in the march’s organization, which is very upsetting.”

On August 24, Ukrainians received many messages of congratulations from the world leaders. In his message to the people of Ukraine, U.S. President Donald Trump underscored the challenges facing Ukraine and the world this year, noting the importance of the Ukrainian authorities’ peace initiatives and confrontation with the COVID-19 pandemic.

“I am proud the United States has provided more than $41 million in assistance to Ukraine to combat the virus and its economic impact. This Independence Day is also an important celebration as Ukraine bravely continues to push back against ongoing Russian aggression. I applaud your efforts to bring a peaceful end to the Russia-led conflict in eastern Ukraine,” President Trump said.

He also noted that the United States will unwaveringly support Ukraine’s sovereignty and territorial integrity until it regains its entire territory, including Crimea.

Pope Francis conveyed to the president of Ukraine and all of Ukraine’s citizens his wishes of peace and prosperity. “At this time, as you celebrate the country’s Independ­ence Day in the wake of the epidemic crisis caused by the COVID-19 pandemic, I assure you and your citizens of my prayer and closeness, so that you build a stable and united state in a spirit of unity, solidarity and dialogue. So that every Ukrainian can live in peace, prosperity, security and fellowship. May the Lord bless you and all the people of your country,” the pontiff’s letter read.

Canadian Prime Minister Justin Trudeau congratulated the Ukrainian community in Canada and Ukrainians around the world on Ukraine’s Independence Day. Mr. Trudeau proudly pointed out that over 1.3 million Canadians of Ukrainian descent call Ukraine their homeland.

Ukraine’s Ministry of Foreign Affairs organized an online celebration of  Independ­ence Day. “As we are unable to invite you to a physical event this year, we hereby wish to invite you to join us in a digital celebration,” the ministry wrote on Facebook. “During our online event, we’ll show you the best of Ukraine. Traditions and innovations, nature and urban life, secrets of the Ukrainian cuisine, greetings from all over the world and the real online party! We want to show you our true Ukrainian hospitality – even in this strange time of the world lockdown.”

The online celebration was organized so that it was possible for everyone around the globe to join in. Three time slots split the celebrations for Asia, Europe and America. The six-hour livestreaming program included greetings from Ukrainian communities and Embassies in all parts of the world, an online tour through the exposition “about unexpected and sometimes unbelievable Ukraine” and the presentation of eco-friendly brands under the banner “Ukraine goes green!”

The livestream also included the movie “Diakuyu” about a Japanese professor who got lost in Ukraine and a Ukrainian cooking show. The musical part included performances by the group MANU & KRUTb at Tustan Fortress, a medieval cliff-side fortress-city whose ruins are in the Lviv region, as well as Onuka, the HARDKISS, NK and Jamala. Modern Crimean Tatar jazz was also featured.

A peer of independent Ukraine

“Of all the festivities in the year, the most important and pleasant for me is Independ­ence Day, a time for identifying myself as a Ukrainian,” commented Roman Andriiv, who at age 29 is a peer of independent Ukraine. “I remember as a child that my family and I would always hang the national flag on our house and wear vyshyvanky, which creates an even more festive mood. And watching the military parade, pride spreads even more for our young country,” said Mr. Andriiv, who hails from Berezhany in the Ternopil region.

“It is interesting to be the same age as [Ukraine’s] independence. For more than a thousand years of history, our state has finally gained independence. Without exaggeration, we now live in an important moment of its establishment and construction,” Mr. Andriiv mused. “We have managed to build a lot together over the years – I believe that new bricks which will strengthen our home will be laid from all corners of our house: from Uzhhorod to Luhansk and from Chernihiv to Sevastopol.”