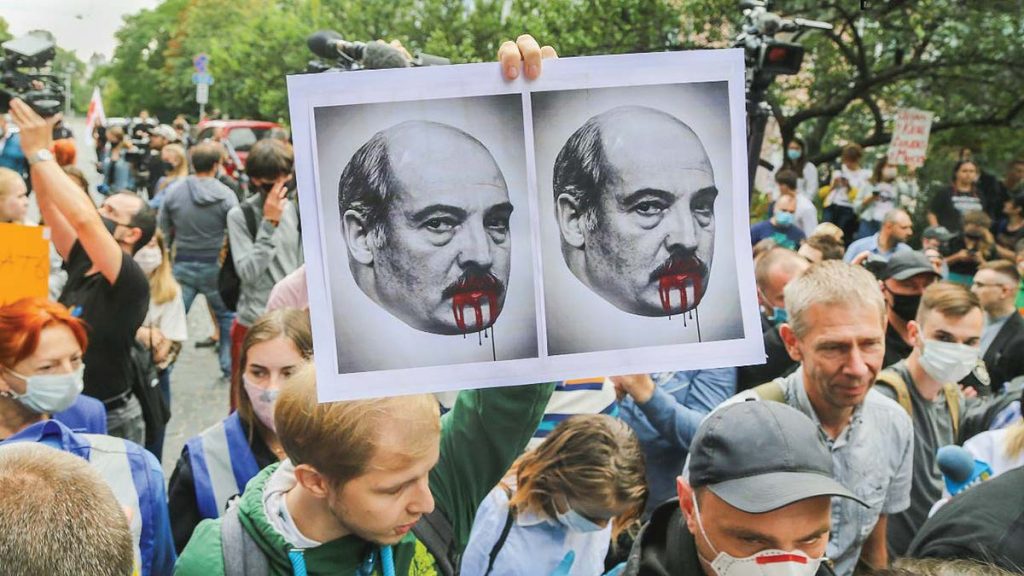 RFE/RL
At an August 13 rally near the Embassy of Belarus in Kyiv held in support of Belarusian protests.

KYIV – Since the beginning of massive protests in Belarus that began after presidential election results considered to be falsified were announced, declaring that incumbent Alyaksandr Lukashenka was the winner, Belarusian and Ukrainian activists have gathered almost daily in front of the Belarusian Embassy in Kyiv.

Protesters in Kyiv have expressed their solidarity with demonstrators in Belarus and have demanded that the results of voting conducted at the Belarusian Embassy in Kyiv be published. That has not happened. However, Belarusians who live in Ukraine’s capital say that votes from the Kyiv polling station are mostly in favor of opposition candidate Svyatlana Tsikhanouskaya, who was forced to leave Belarus in the aftermath of the election’s conclusion on August 9.

Meanwhile, Ukraine’s Minister of Foreign Affairs Dmytro Kuleba on August 17 summoned Ukrainian Ambassador to Belarus Ihor Kyzym for consultations in Kyiv to assess the prospects for further Ukrainian-Belarusian relations. Mr. Kuleba pointed out that, on August 14, the Minsk authorities had handed over detained “Wagner militants” to Russia, despite the “presence of all legal and moral grounds to hand them over to Ukraine.”

Belarusian special forces on July 29 captured 33 men who were supposedly headed to Venezuela as a private armed force. Some of them are affiliated with the most notorious private military company known as the Wagner Group, named after its leader’s pseudonym. Among the men captured near Minsk were 28 militants who had fought in districts of Ukraine’s Donetsk and Luhansk regions on the side of occupying forces. Some of the captured terrorists have Ukrainian citizenship.

Ukraine’s Ministry of Foreign Affairs (MFA) was in negotiations with its Belarusian counterpart to hand the militants over to the Ukrainian justice system, but those efforts were not successful.

“This step undermined trust between our countries and dealt a heavy blow to our bilateral relations,” Mr. Kuleba said in a statement published on the MFA website. “After that, Alyaksandr Lukashenka repeatedly and completely groundlessly accused Ukraine of unfriendly steps against Belarus. Official reports on Russian and the Collective Security Treaty Organization’s possible active involvement in resolving the situation in Belarus create qualitatively new threats to both the personal safety of citizens and regional security in general. The combination of these facts and actions, and the development of events in Belarus, whose society has expressed a vote of no confidence in the official results of the presidential elections in Belarus, radically changes the situation in Belarusian and Ukrainian relations,” Minister Kuleba said.

“Taking this into account, I decided to summon Ambassador of Ukraine to Belarus Ihor Kyzym for consultations in Kyiv to assess the prospects of Ukrainian-Belarusian relations in the new reality that has developed and to make appropriate decisions, taking into account the entire range of factors,” Mr. Kuleba said.

He noted that Ukraine’s Foreign Affairs Ministry for the first time in its history had resorted to such a step in relations with Belarus and was doing it solely because of the unacceptable actions on the part of Minsk. “We will strictly defend our national interests. At the same time, the ambassador’s summons for consultations will in no way affect our ability to ensure the rights and legitimate interests of Ukrainian citizens in Belarus,” Mr. Kuleba assured the public.

The minister pointed out that, due to the exacerbation of the security situation in Belarus, Ukraine has already recommended that its citizens refrain from traveling to the neighboring country. Those who are already in Belarus are advised to avoid public events and places of mass gathering.

The MFA explained that recalling an ambassador for consultations in Kyiv is one of the forms of diplomatic response used to demonstrate dissatisfaction with the policy or unfriendly actions of a foreign state.

Three Ukrainian citizens detained by law enforcement officers in Belarus, Yevhen Vasyliev, Kostiantyn Reutsky and Oksana Alioshyna, have been released and returned to Ukraine. “Ukraine always returns its citizens,” stated President Volodymyr Zelenskyy on August 14. He added that the three Ukrainians were illegally detained on August 12 in Minsk, despite the fact that they had not violated the laws of the Republic of Belarus.

The president said that information about another Ukrainian in the detention facility in the Belarusian city of Brest is being verified. “Currently, the Ministry of Foreign Affairs and our Embassy in Belarus are working to find the person,” he said. Mr. Zelenskyy commented that he hopes the problematic situation in Belarus will be resolved through dialogue between the current government and society.

“The situation in Belarus is difficult now. We understand that it is necessary to handle this situation only through a dialogue. Many people have been detained. There are already thousands of them. Of course, we all expect that the government will still find a way to meet the demands of the people who chose this government and all the people will be released,” Mr. Zelenskyy said.

Many activists and observers see parallels between the Belarusian protests and Ukraine’s Revolution of Dignity.

“Recent events in Belarus revived my memories of the Maidan in Ukraine and how important for us was every bit of international support we could get,” said Olha Ruda, an activist attending the protest in front of the Embassy of Belarus on August 13. “Therefore, coming to the Embassy to manifest my position was about showing to the people of our neighboring country that they have support here – my support and the support of other people who showed up that day. Such support in the best-case scenario should be transformed into an appropriate reaction by Ukrainian officials to the Belarus protests.”

“But besides that, it is also about boosting the morale of those fighting for freedom. After all, the spirit and faith are what keeps people of Belarus going until the end,” Ms. Ruda observed.

For the past week, Kyiv has been filled with white-red-white flags, the colors of the historic national flag of Belarus, which was replaced by President Lukashenka with an updated version of the flag of the Byelorussian Soviet Socialist Republic. The Belarusian Democratic Republic used the white-red-white version in 1918 before Belarus became a Soviet republic. Since 1995, this flag has been banned, and it has become a symbol of opposition to the Lukashenka regime. In support of the Belarusian people’s protests, residents of many Ukrainian cities have flown the historic flag on squares, monuments and official buildings.

“Interstate relations are, first of all, the accuracy and balance of public statements. No matter what emotional state you are in today, relations between neighbors will be tomorrow, the day after tomorrow,” reads the statement released on August 16 on the Presidential Office website. “However, today it was practically officially announced in Minsk that the Ukrainian leadership allegedly ‘orders’ new elections in Belarus. This is not just a patently false claim. This is deliberately mounting tension, conscious provocative behavior. For what? Or even not in this way: what does Ukraine have to do with it if the events relate exclusively to Belarus and internal mistrust?”

“The only thing worth saying to the Belarusian state is to respect the right of its fellow citizens to life, health, and freedom, and political maturity… Not only the future of Belarus, but also the future of many people, with any politicians, will depend on this,” the statement underscored.

On August 17, President Zelenskyy held a closed-door meeting with heads of intelligence services and law enforcement agencies, and leaders of several oblast state administrations concerning the escalation of the situation in Belarus. He noted that events in Belarus could significantly affect Ukraine.

According to the Presidential Office, the parties analyzed the domestic political situation in Belarus and numerous external factors that could influence the development of post-election events. The parties also assessed all possible scenarios of the current political upheaval in Belarus, including various types of escalation in view of so-called hybrid types of conflict. In addition, the parties analyzed the direct risks to Ukraine that could arise due to the ongoing unrest in Belarus.