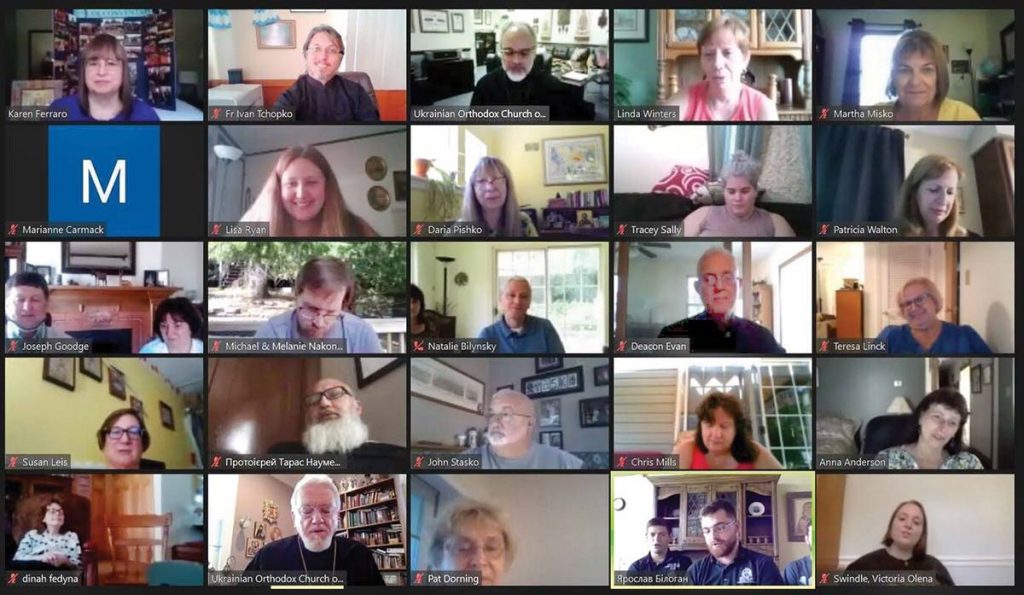 Staff | The Ukrainian Weekly | Subscription
A view of the Ukrainian Orthodox League’s convention held via Zoom.

Senior UOL President Karen Ferraro welcomed the approximately 60 attendees to the abbreviated single-day virtual event that included combined senior/junior, junior- and senior-only sessions. The UOL was honored to have both Metropolitan Antony and Archbishop Daniel present for the entire day, from 9 a.m. to 3:30 p.m.

Along with conducting the normal business of the convention, the entire convention body listened intently to the hierarchal address by Metropolitan Antony, whose words of love and hope inspired all.

While the Juniors went off to their own business session, led by Junior President Alexis Naumenko, the seniors discussed the details of the 2019-2020 Financial Report and the proposed 2020-2021 UOL budget, impacted by the lack of an in-person convention and the benefit of the fund-raising normally done by the host chapter.

Josh Oryhon, camp manager of All Saints Camp (ASC) in Emlenton, Pa., gave a detailed report on the positive steps taken to provide virtual camp experiences to youth this summer. ASC continues its capital campaign and the UOL is committed to making a significant contribution this year toward its over all $25,000 pledge.

In the afternoon, the Junior UOL was honored to have the Rev. Moses Berry speak on the topic “Understanding Today’s Racial Injustice Matters from an Orthodox Perspective.” The Rev. Moses’ talk can be viewed on the UOL’s Facebook page (www.facebook.com/uolusa).

The annual UOL Essay Contest had 67 entries this year, compared with 121 last year, with the change relating to the cancelling of in-person Church School classes. For the first time, an international entry was received from Romania, highlighting the reach of social media. Winners were awarded laminated icons, which will be mailed to them.

The Very Rev. Stephen Hallick-Holutiak Senior Recognition Award was presented to Michael Nakonachny from Parma, Ohio. This award, originally named Orthodox of the Year, was given to Mr. Nakonachny in recognition of his work as chairman of the 2019 UOL Convention at ASC and his continued devotion to and support of the camp.

The Metropolitan J. Baran Achievement Award was presented to Natalie Kapeluck Nixon from Carnegie, Pa., for outstanding service to the youth of the UOC of U.S.A. Ms. Kapeluck Nixon, the national youth director for the Ukrainian Orthodox Church of the U.S.A., was presented this award for the innovative daily ministry she set up at the national level for three different age groups in a virtual format in the midst of the COVID-19 pandemic.

The 2020 Senior Chapter of the Year was awarded to Ss. Peter and Paul UOL Chapter in Youngstown, Ohio. This chapter raised over $22,000 for its parish in the past 12 months. It sponsored five free community dinners for the needy and cleaned/updated the church hall’s kitchen in preparation for the parish’s centennial celebration.

The Very Rev. Volodymyr Bukata Award is presented to a Junior UOL member who has done outstanding work toward accomplishing the goals and aims of the UOL on a national, regional, chapter, or local church level. This year’s winner was Natalia Novicky, from Youngstown, who has been a great role model and leader for members of her local Junior chapter and served as president this year. She worked hard to achieve the goals of service to the parish, community and the Church.

The Philadelphia Junior Chapter was awarded Junior Chapter of the Year honors. Among its achievements were donations of more than $1,500 to charity, collecting arts and crafts supplies for orphanages in Ukraine, and collecting 600 pounds of food for a Philadelphia food bank. In the past few months, the chapter’s members have spent countless hours packing up and hauling food for multiple pop-up food pantries sponsored by their home parish, St. Vladimir Cathedral in Philadelphia.

The UOL awarded over $13,000 in scholarships through the Lynn Sawchuk-Sharon Kuzbyt (LSSK) Memorial Scholarship fund. This year’s recipients were Ms. Novicky from Youngstown, Ms. Naumenko from Philadelphia and Dennis Hrytsay from Philadelphia.

The convention was officially closed by Archbishop Daniel with the “Prayer in Time of Coronavirus,” for all those suffering, those who have reposed and those on the frontlines caring for the sick.

The 74th annual UOL Convention is planned for July 21-25, 2021, in the Philadelphia area. For additional information, readers can visit the UOL website, www.uolofusa.org.