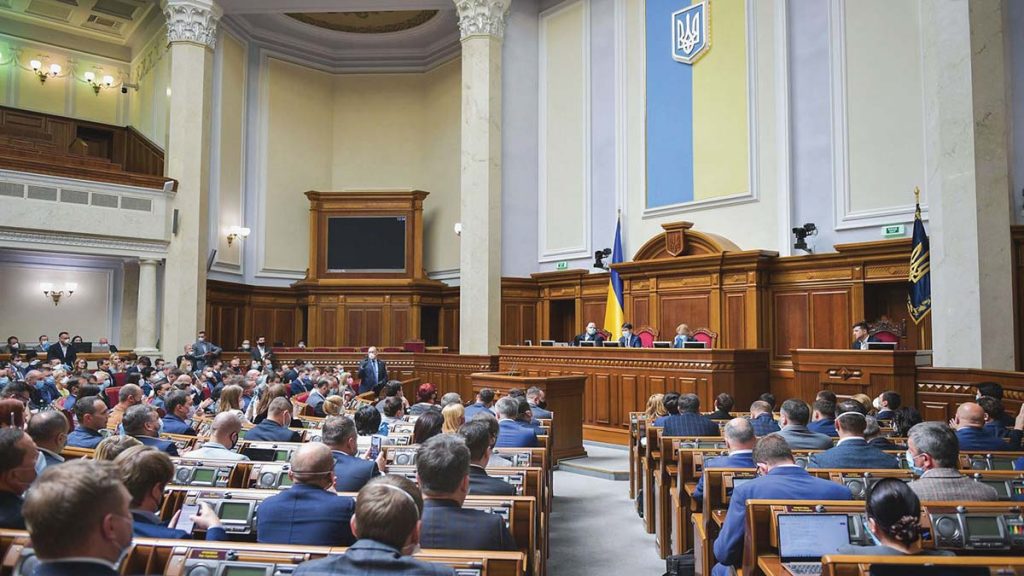 Presidential Office
At the Verkhovna Rada, which voted to change the raion zoning in Ukraine, decreasing the number of such districts from 490 to 136.

KYIV – On July 17 a big step in decentralization was taken by the Ukrainian Parliament: for the first time since the Soviet era, the borders and centers of administrative units across the country were changed. Those units are called “raions,” and only a few weeks ago, Ukraine had 490 of them incorporated into 24 oblasts and the Autonomous Republic of Crimea. Now those oblasts and Crimea have only 136 raions (districts) encompassing different territories, populations and administrative centers.

This massive change comes only three months before local elections, when deputies and heads of raion councils will be chosen.

“The previous raions of Ukraine were formed during Soviet times, in the first half of the last century, and do not meet modern standards on several criteria,” Prime Minister Denys Shmyhal noted on June 12.

For the last century, many things have changed in the raions: the population, the economic situation, the ratio between rural and urban communities. However, raion borders remained unchanged. One of the consequences is that disproportionate raions have appeared in Ukraine.

“We have raions inhabited by a little more than 5,000 residents [Polissia raion in Kyiv oblast – ed.] and areas with over 180,000 people [Kharkiv raion in Kharkiv oblast]. Because of this, there are considerable imbalances, causing difficulties in administration. The responsibility of these raions is the same, but the workload varies greatly, so that requires correction,” Mr. Shmyhal explained at the Cabinet meeting.

Another consequence of outdated zoning is that the division into raions does not correspond to the state’s political tasks. During the Soviet era, raions in western Ukraine were shrunk to form as many party cells as possible and to manage people and territories more easily. Nowadays, the trend is different: the greatest number of raions is being formed in temporarily occupied Crimea (10) and partially occupied Donetsk and Luhansk oblasts (right each) in order to increase the presence of Ukrainian authorities in these territories after de-occupation. A group of migrants from the Crimean peninsula and representatives of the Crimean Tatars worked on new zoning in Crimea.

Among the criteria for the formation of new raions are these: location within one oblast, a population of at least 150,000 inhabitants in accordance with European standards, compactness and continuity of the territory. The primary purpose of the change is to make it easier for the government to organize various structures on the ground that deal with such matters as courts, taxes, social security, pension funds, police, etc. Thus, a raion is an administrative-territorial unit for the government, not for citizens.

A community is a basic unit of administrative division in Ukraine. According to the law of Ukraine adopted in 1997, a community, also known as “hromada,” is composed of residents who are united by permanently living in a village, settlement or city, or a voluntary association of residents of several villages that have one administrative center. The communities form raions, several raions form an oblast.

“Administrative and territorial reform is one of the most important and successful transformations, and it should be completed before the local elections scheduled for October this year,” the prime minister announced on June 12 as he opened an extraordinary meeting of the government. “This is one of the most essential and most successful reforms. This reform is also one of the most understandable and is supported by the people, so we should complete it this year.”

“We have to hold local elections in October, as was planned, according to the new administrative division, so that the country can advance in terms of improving the provision of public services to the citizens. We mustn’t slow down or delay the process. The reform is primarily implemented for the benefit of the people, for their convenience,” the prime minister stressed. For the communities to function successfully, Mr. Shmyhal said he believes it is necessary to move to the next stage of reform – the formation of optimized raions.

Initiators and supporters of the new zoning say it is impossible to eliminate raions and leave only communities. Due to Ukraine’s size, united communities and oblasts alone are not enough – there should be an intermediate level of government. Raion authorities are partially responsible for medicine, education, social protection and logistics. Raion councils will support those institutions that communities are not able to afford. These include local hospitals, out-of-school educational institutions, children’s and youth sports schools, orphanages and homes for the elderly. A raion’s budget will now be replenished mainly by utilities and institutions that remain on its balance sheet and subsidies from the national budget.

The local elections on October 25 will be held according to the new zoning. More than 1,000 community leaders will be elected in Ukraine, as will deputies to the village, settlement and city councils, deputies to more than 100 raion councils, and deputies to 22 oblast councils (councils in Luhansk and Donetsk oblasts will not be elected). The current raion councils lose their power the day after the election, on October 26. Raion administrations, the executive bodies on the raion level, will work until the end of 2020 because they have ongoing funding.

“The biggest problem of the administrative-territorial reform, the so-called zoning, is that most of the funds that should be in the united communities have remained at the raion level,” said National Deputy Yaroslav Yurchyshyn from Holos faction. “We have formed new raions chaotically, very often without the consent of local communities. Currently, the raions have a lot of money and a minimum of functions. United communities have a lot of power and a minimum of resources to implement them,” Mr. Yurchyshyn pointed out.

“For the central government not to put pressure on local self-governance, it is necessary to withdraw funds from the raions and transfer them to the communities. Because while united communities have been given powers, they have not been given the resources to implement them. It is not decentralization, but an imitation of reform, like everything that the current government implements,” commented Mr. Yurchyshyn, who is the deputy chairman of the Verkhovna Rada’s Committee on Anti-Corruption Policy.

“This is a reform of the so-called basic level, when sustainable communities cover the territory,” Mr. Shmyhal said on June 12. “The communities need to be modern and responsive to people’s needs. That implies convenient services. After the election process in the fall, the communities will work at full capacity,” the prime minister predicted.