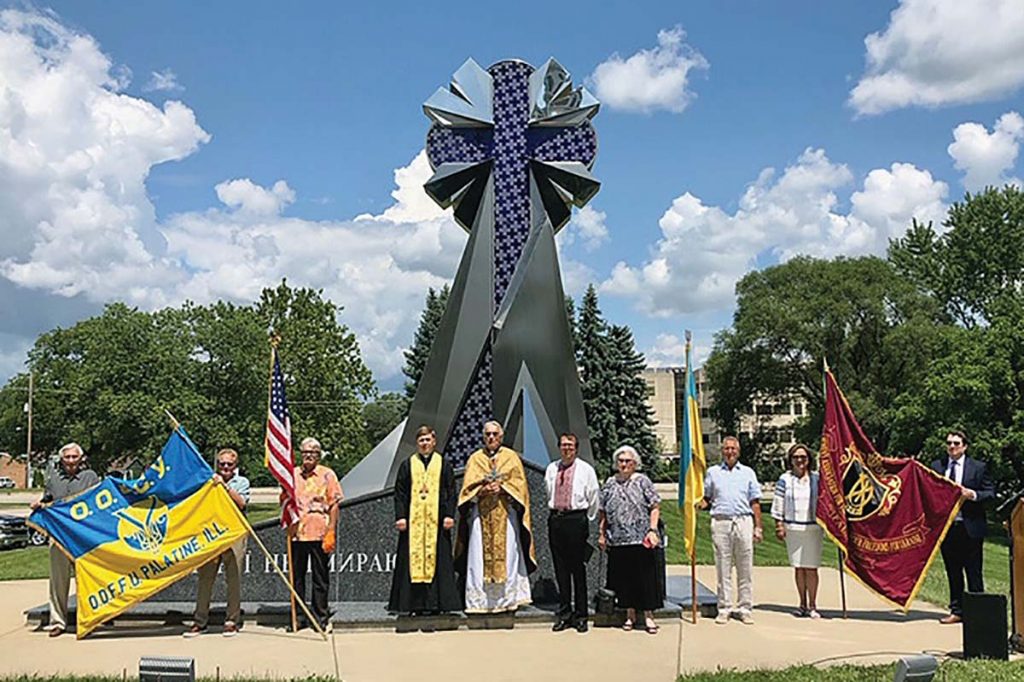 BLOOMINGDALE, Ill. – On the initiative of the Organization for Defense of Four Freedoms for Ukraine (ODFFU), Branch 31 in Palatine, Ill., in cooperation with St. Andrew Ukrainian Orthodox Cathedral in Bloomingdale, Ill., the Ukrainian community of Chicago and suburbs gathered, on Sunday, August 2, to honor the memory of the Ukrainians who perished in the Battle of Brody in 1944.

Approaching the end of World War II in Europe, the Russians launched offensives to push the occupying German forces back into Germany, which would leave the Russians free to pursue their objectives in seizing western Ukraine, Belarus and the left bank of the Vistula River in German-occupied Poland, and gaining a foothold in Romania. With the objective of saving western Ukraine from Russian forces, young and patriotic Ukrainians comprising the Galicia Division positioned themselves near the town of Brody. The Ukrainian objective failed. As noted in the Internet Encyclo­pe­dia of Ukraine, “Of the division’s 11,000 soldiers, 3,000 returned from Brody and regrouped in Serednie, Transcarpathia. After the battle, some members of the division joined up with the Ukrainian Insurgent Army. Many were taken as prisoners of war.”

With their attendance at this solemn observance, Ukrainian American Veterans Post 32, the Women’s Association for Defense of Four Freedoms for Ukraine – Olena Pchilka Branch, the Suburban Council of Ukrainian Voters and the Ukrainian Congress Committee of America – Illinois Division honored the memory of the courageous men and women who sacrificed their lives for Ukraine.

In his remarks, the Very Rev. Poliarny emphasized that “young volunteers, members of the Galicia Division, demonstrated their national and political values, patriotism, and renewed the tradition of armed struggle for the sovereignty of Ukraine. He underscored: “We do not have the right to forget our heroes who have devoted and sacrificed their lives in service to the Ukrainian people and protection of our homeland.”

Roman T. Holowka, president of ODFFU Branch 31, offered a brief historical overview of the Battle of Brody. He reminded the participants of the event that “we remember those that fought in the Battle of Brody with prayer, respect and gratitude for their sacrifice.” He noted that three survivors of the Battle of Brody are buried here, at St. Andrew Ukrainian Orthodox Cemetery, Mykola Fylypovych, Lubomyr Cepynsky and Vjacheslav Partykevych, and concluded his remarks with “Glory to our Heroes! Heroes Never Die!”

Maria Korkatsch-Groszko, Ph.D., is vice-president of the church board at St. Andrew Ukrainian Orthodox Cathedral and of the UCCA Illinois Division.