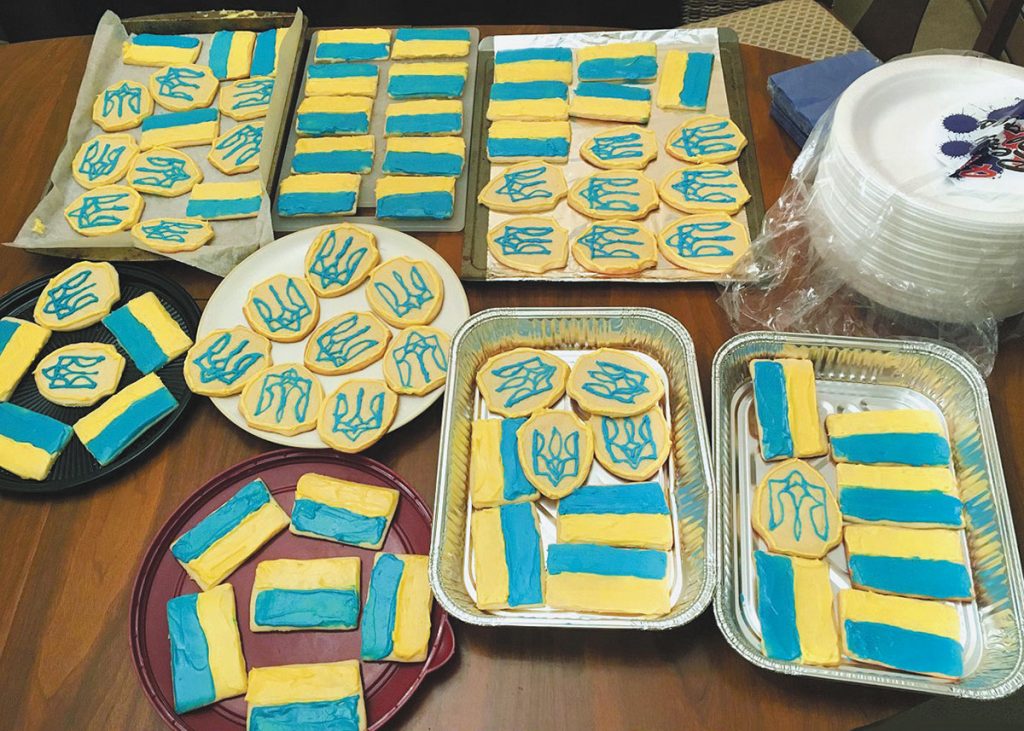 Staff | The Ukrainian Weekly | Subscription
The Ukrainian-themed cookies created by the two Ukrainian teens from Plast.

CLEVELAND – When the going gets tough, the tough pull out their rolling pins. The specter of coronavirus may have extinguished this year’s Ukrainian Independence Day festivities in Cleveland, but it could not squelch the spirit of two industrious Ukrainian teens, Sofia Kosmos Zunt and Kalyna Kulchytsky, who found an innovative way to commemorate the holiday.

As a project for Plast Ukrainian Scouting Organization, the girls baked 100 cookies from scratch and decorated each with blue and yellow frosting to resemble the Ukrainian flag and the tryzub. Over the next couple of days, Sofia and Kalyna dressed in Plast uniforms and, in partnership with their mothers, delivered cookies to the mailboxes of about 50 senior registered members of the Plast scouting community who live in various suburbs of Cleveland.

Yet their outreach was not complete. For about 25 seniors who belong to the Cleveland Plast chapter but live a significant distance away, including several out of state, the girls created and laminated blue-and-yellow bookmarks, which they mailed. The two teens did not personally know many of the older Plast members, who are comparable in age to the girls’ parents and grandparents. The inspiration to extend them a small kindness arose from Plast’s encouragement of friendship.

Considering their project finished, Sofia, age 17, and Kalyna, 15, were both surprised with what happened next: A stream of messages rushed in and continued for many days – via phone, e-mail, text, social media and even by postal mail from a bookmark recipient in California – with expressions of thanks for the unique remembrance and celebration of Ukraine’s Independence Day. The appreciation for the girls’ efforts and virtual camaraderie was overwhelming.

What started quite simply with butter, sugar and flour in a kitchen in Cleveland this August will hopefully resonate with these two young women for life, as their labors revealed something unseen but mighty, a steadfast truth of our diaspora: While outside forces, whether political or virus-related, may be formidable, the power to keep the Ukrainian spirit thriving is in our hands.