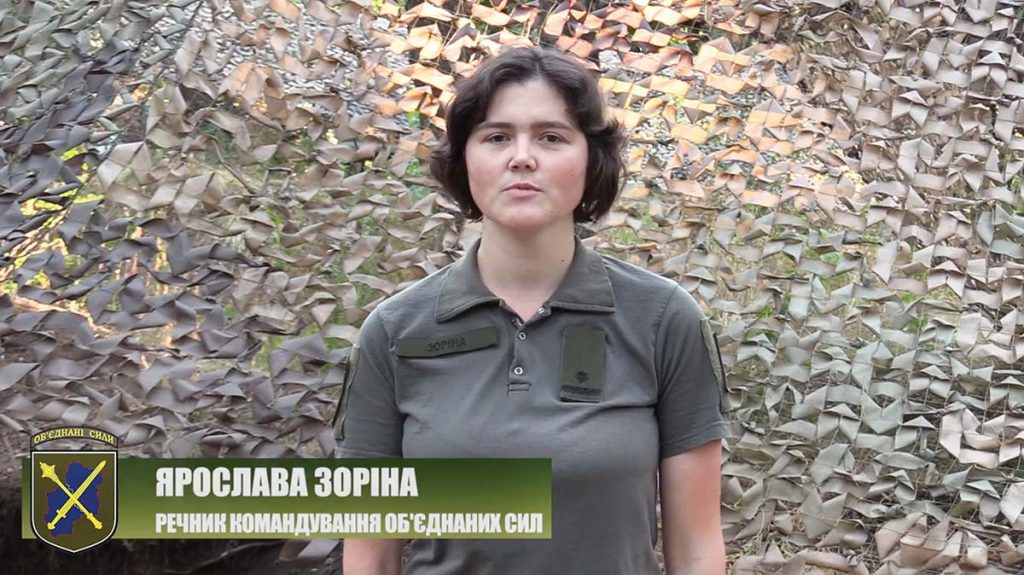 KYIV – On September 6, on the 42nd day of the “full and comprehensive ceasefire,” armed forces of the Russian Federation violated the agreements reached by the Trilateral Contact Group (TCG) and twice attacked Ukrainian positions. As a result of the second breach of the truce, one serviceman of the Armed Forces of Ukraine was killed.

The enemy opened fire with small arms on the Joint Forces units’ positions near Prychepylivka in the Luhansk region. As the Joint Forces Operation press center reported, “In response to the shelling, Joint Forces used available firearms and repulsed the Russian armed forces. The losses of the enemy are being clarified.”

The first violation of the ceasefire agreement that day took place earlier near the village of Krasnohorivka in the Donetsk region. The enemy opened fire with an automatic easel grenade launcher, firing at the Joint Forces. As a result of the shelling, a serviceman of the Armed Forces of Ukraine was wounded. The soldier was promptly given first aid and evacuated to a medical facility.

“This audacity of the enemy indicates that the Russian Federation is aimed at disrupting the Trilateral Contact Group’s agreements of July 22, 2020,” stated the Joint Forces Operation press center. “Today’s shelling proves once again that the so-called ORDLO leadership does not intend to achieve peace. The Joint Forces provide another opportunity for the so-called ‘DPR’ [Donetsk People’s Republic] and ‘LPR’ [Luhansk People’s Republic] to comply with a full and comprehensive ceasefire,” reads the statement.

As previously reported, on July 27 a full and comprehensive ceasefire went into effect in the area of armed conflict in the Donbas region. The decision was adopted on July 22, at a regular meeting of the Trilateral Contact Group (Ukraine, Russia and the Organization for Security and Cooperation in Europe). All parties approved the ceasefire agreement; however, Russian proxies fired upon Ukrainian positions at 12:20 a.m. – 19 minutes after the start of the ceasefire.

Other fatalities in the war zone

September 6 was the most eventful day since the start of the ceasefire, which went into effect July 27. Ukrainian soldiers continued to extinguish fires in the Donetsk and Luhansk regions that reportedly were set by Russian forces. Unfortunately, during the evacuation of personnel, two Ukrainian defenders, bypassing the fire center in the “gray zone,” came upon on an unknown explosive device on the enemy’s minefield, receiving lethal injuries.

Later that day, a tanker truck exploded on an unidentified explosive device on its way to extinguish smoldering centers. Two Joint Forces personnel were injured in the explosion. Both soldiers received medical treatment and were taken to a medical facility; the next day, one of the men died in the hospital due to numerous burns.

Ukraine’s forces on the alert

Ukraine’s Defense Minister Andriy Taran pointed out that Article 51 of the United Nations Charter gives a country the right to defend itself. At the same time, he stressed that Ukraine has the political will to achieve a permanent ceasefire, and he expressed hope that the other side will also demonstrate such resolve.

“The situation in the area of ​​the Joint Forces Operation (JTO) remains stable and fully under control. Ukrainian defenders continue to perform their assigned tasks faithfully,” the JTO press center reported at 7:30 a.m. on September 9.

“For the past 24 hours, on September 8, no violations of the agreements, which came into effect on July 27, 2020, were recorded in Ukrainian units’ areas of responsibility. There was silence along the entire line of demarcation. Units of the Joint Forces are constantly on the alert to adequately respond to any changes in the enemy’s operational situation and insidious actions,” stated Yaroslava Zorina, spokesperson for the Joint Forces command at the daily briefing.

An extended meeting of the leadership of the Ukrainian delegation to the Trilateral Contact Group (TCG) took place on Sunday, September 6. “We very much appreciate the full and comprehensive ceasefire regime that was reached on July 27. That is why we are constantly monitoring the implementation of the agreements, and it is important to us that the Normandy format yields results as soon as possible. The Ukrainian party will do everything to prevent the truce in the Donbas from being disrupted,” stated the head of the Ukrainian delegation to the TCG, former President Leonid Kravchuk.

A document released by the OSCE clearly stated that its mission had conducted aerial surveillance and did not find any changes in the existing positions of Ukraine’s Armed Forces as compared to July 5. That is, the OSCE confirmed the absence of any changes on Ukrainian side that would violate the TCG agreement of July 22 on measures to reinforce the ceasefire regime.

“On September 11, a meeting of advisors of the Normandy format [Germany, France, Ukraine and Russia] is to take place. We expect certain proposals, certain decisions there,” said President Volodymyr Zelenskyy during a conversation with the news media while on a working trip to the Sumy region on September 8.

“We will still do everything to preserve the regime of silence to avoid a large number of wounded and dead,” Mr. Zelenskyy noted. “We responded immediately. There are some things that we do not discuss with the media because our task is to protect not one person, but 40 million citizens of our independent country,” the president added.

Following the breach of the truce, Ukraine acted as agreed and informed the OSCE Special Monitoring Mission in Ukraine about the incident. “In addition, I initiated an urgent conversation with the minister of foreign affairs of the Russian Federation, Sergei Lavrov, to discuss the current situation and the ways out of it,” stated Ukraine’s Minister of Foreign Affairs Dmytro Kuleba.

“The killing of Ukrainian soldiers by the occupiers just before the meeting of advisers and ministers increases the stakes, changes the atmosphere and changes the issues we have to discuss,” said Mr. Kuleba. “It is an attempt to roll back the whole process to security issues because they are violated. As of now, the meeting of advisers remains on schedule. Ukraine is preparing for it very carefully. And, certainly, the death of our soldiers will be one of those issues that will be discussed very harshly.”

“All our partners received detailed information about what happened. It is very important that we told the truth about what happened in the Donbas, about who broke the ceasefire. Given the situation’s sensitivity, it will be carefully studied in international capitals, and then there will be feedback. Our international partners support us in saying that the ceasefire must continue and that we must seek a diplomatic solution to the settlement and de-occupation of our territories,” Minister Kuleba affirmed.

“To this end, the Ukrainian party will use any mechanisms, both within the TCG and within the Normandy format, which will save Ukrainian servicemen and civilians’ lives. We remain fully committed to the peace process and the implementation of the agreements reached,” Mr. Kravchuk, the leader of Ukraine’s delegation to the TCG, emphasized.